Lewis will cover the life and legacy of African-American entomologist and civil rights advocate Margaret Collins (1922-1996) at his presentation on Tuesday morning, Nov. 2. The long-awaited conference will be hybrid, that is, both virtual and in-person.

Collins will be "the fourth woman and second Black entomologist to be the subject of the Founders' Memorial lecture in the award's 64-year history," according to an ESA news release. (See list of previous recipients.)

'The Termite Man'
Vernard Lewis, who holds a doctorate in entomology (1989) from UC Berkeley, is a recognized national and international authority on drywood termites. He is known for his pioneering research on detection innovations and nonchemical methods of control. Lewis joined the UC Berkeley faculty in 1990 and was the university's first African-American faculty-member hired in the 150-year history of the Rausser College of Natural Resources. He  retired July 1, 2017 from a 35-year career as an urban entomologist, the last 26 years as a Cooperative Extension specialist.  As Lynn Kimsey, director of the UC Davis Bohart Museum of Entomology and UC Davis distinguished professor of entomology told us in a Bug Squad blog in July 2017: "He was the best; knowledgeable, personable and engaged. I'm really annoyed that he retired."

"He was always the go-to person in Extension when it came to termites, and he had that special personality which enabled him to immediately engage with people," related UC Davis distinguished professor Frank Zalom, a past president of the 7000-member ESA. "I always got the feeling that he genuinely liked what he did, and it showed."

During his career, Lewis focused his research on a variety of urban pests, including not only termites, but ants, bed bugs, cockroaches and wood-boring insects. He authored more than 150 refereed and trade magazine articles and book chapters on termites and other household insect pests. He delivered more than 700 presentations to widespread audiences.  Lewis  was inducted into the National Pest Management Association Hall of Fame in 2016. Since achieving emeritus, he has been spending his time on university and industry committees and public boards dedicated to increasing diversity, equity, and inclusion for underrepresented minorities and women into STEM careers.

In June 2020, Brite Energy Innovators paid tribute to Lewis as one of the world's Amazing Black Scientists. An excerpt: "At UC Berkeley, Lewis famously constructed a 400-square-foot (37-square-meter) wooden building near the campus for investigating pest insect detection and control; The structure was affectionately known as 'Villa Termiti.' Built in 1993, the building temporarily housed rotating communities of bedbugs, termites, beetles and ants, while Lewis and other scientists studied the insects' habits and tested their resistance to different methods of extermination. These included exposure to X-rays, microwaves, liquid nitrogen and fumigation, according to UC Berkeley."

Another excerpt from Amazing Black Scientists: "Lewis also worked to promote diversity in entomology, and participated in outreach programs to introduce underserved youth to life sciences, insects and biodiversity." He was one of 20 researchers featured in ESA's 2015 book “Memoirs of Black Entomologists,”  designed to encourage minority students to pursue careers in science. Margaret Collins
'The Termite Lady'
Margaret James Strickland Collins was known as "The Termite Lady" during her entomological career that spanned five decades. She engaged in extensive research on termites that included identifying a new species,  Neotermes luykxi. "Her pioneering studies on the mechanism and evolution of termite desiccation resistance across various habitats provided foundational knowledge for generations of entomologists, field biologists, and ecologists," said Lewis, who wrote about her in a piece published June 1, 2016 in BioOne journal.

His abstract: "Often legends go unrecognized for their achievements in science and the betterment of society. In the case of Margaret Collins, it has been almost 20 years since her passing, and except for appreciation by a small cadre of termite experts, her contributions to entomology have received scant notice. However, her work and legacy have stood the test of time, and even today, she is considered, and often cited as, the definitive source for differences in toleration and resistance to drying among species of termites. At her core, Margaret was a field biologist, and she demonstrated it through her travels and termite collection trips to a dozen countries. Her long and illustrious career included publishing of scientific papers, tenured faculty positions, and service as a curator of the termite collection at the National Museum of Natural History, Smithsonian Institution, in Washington, District of Columbia. Margaret achieved many firsts during her life. She was the first African American female to be awarded a Ph.D. involving entomology at a major university. In addition, she was the first woman graduate student for the legendary isopterist and Professor of Zoology, Alfred E. Emerson. Her passion for termites remains highly visible in her published works. Her passion for her family and her strong support of civil rights for women and African Americans were less visible except to those she knew personally."'

Born in Institute, W.Va., on Sept. 4, 1922, Margaret was recognized as a child prodigy at age 6, "as evidenced by her being awarded the privilege to check out books at the West Virginia State College Library," Lewis wrote in the journal article. Following her high school graduation at age 14, she went on to receive her bachelor's degree in biology from West Virginia State College in 1943, and her doctorate in zoology in 1949 from the University of Chicago. Her thesis: Differences in Toleration of Drying among Species of Termites (Reticulitermes).

Collins was one of the first African-American women to receive an advanced degree related to zoology/entomology. "Those of us with collegiate degrees are well aware of the challenges and obstacles that can drain enthusiasm and delay completion, which include lack of funding, being away from home, and difficult and demanding courses and class loads," Lewis wrote. "Margaret had all of these, plus more."

"Upon receiving her Ph.D. in 1950 at the University of Chicago, Collins became the first African-American female entomologist," Lewis noted. "In the mid-'50s while on the faculty of Florida A&M, her invitation to speak at a local predominantly white university on biology and equity was cancelled due to a bomb threat. During the Florida A&M Student Council bus boycott of 1955 to protest racial inequality, Dr. Collins volunteered to drive people to work. These activities led to her being closely watched by the police and FBI."

In 1979, Collins coordinated an American Association for the Advancement of Science symposium on "Science and the Question of Human Equality," and later that year, published a book with the same title. The book is "an interdisciplinary look at racism and science, investigating the biological and social realities of individual and group differences," according to the publisher.

Love of Science
Just like Margaret Collins, Lewis shares a love of termites, a love of science, and a love of public service.  In the ESA news release, ESA President Michelle S. Smith praised Lewis for his "remarkable career in both research and extension" and as "a role model for current and future generations of insect scientists. His pioneering spirit echoes that of Dr. Margaret Collins, and her story of determination, curiosity, and perseverance will be a perfect complement to our annual meeting showcasing adaptation and transformation in insect science."

We're delighted to see this much deserved recognition for two legendary entomologists. 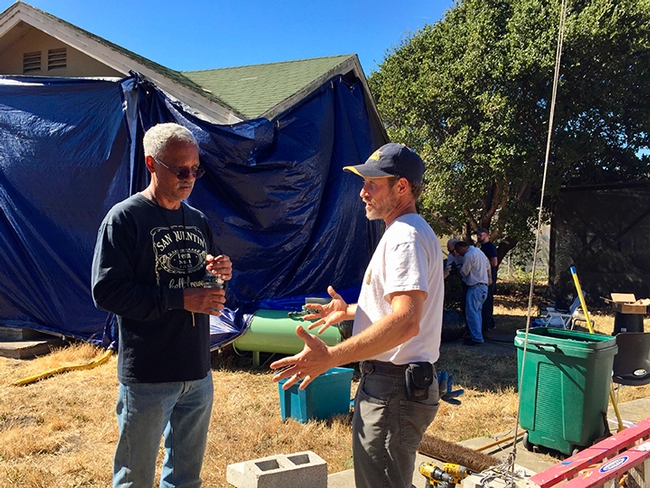 In this image, taken in October 2018, consultant and mentor Vernard Lewis (left), confers with Andrew Sutherland, UC integrated pest management advisor for Bay Area counties, about the Villa Termiti at the UC Berkeley Field Station. Sutherland, who holds a doctorate in entomology from UC Davis, was recently awarded state funding to remodel the Villa for future training of pest management professionals in the state. (UC ANR Photo by Pam Kan-Rice) 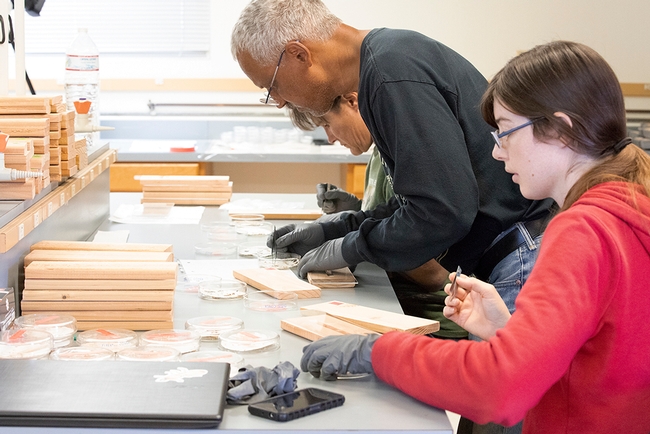 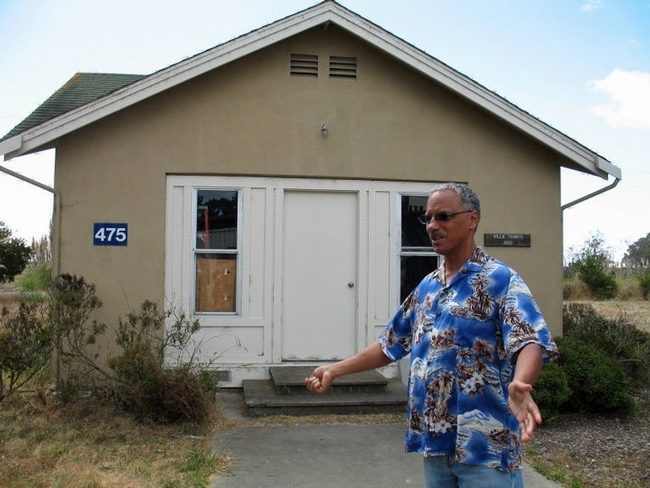 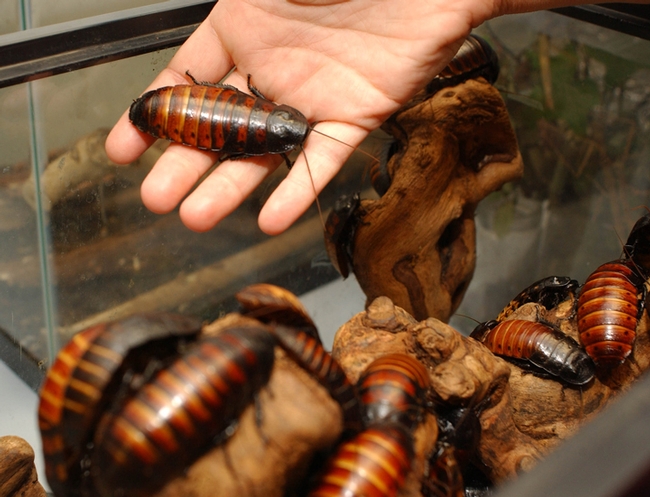