But if you're thinking of agriculture--more specifically sustainable agriculture practices in the 21st century--you ought to be thinking of the importance of unmanned aerial robots.

These drones promise to have a huge impact on 21st century sustainable agriculture.

Indeed, a newly published review paper, “Drones: Innovative Technology for Use in Precision Pest Management,” appearing in the Journal of Economic Entomology, should be required reading. The work of a four-member international team of scientists, including UC Davis entomologist Elvira de Lange, it's one of the first of its kind to summarize scientific literature on the use of agricultural drones for pest management.

De Lange, who assembled the team of authors, says that sustainable agricultural practices in the 21st century should increasingly depend on drones and other innovative technologies.

In advocating the need for more research, the authors say that drones are becoming an important part of precision pest management, from detecting pests to controlling them.

In their review, they emphasize "how sustainable pest management in 21st-century agriculture will depend heavily on novel technologies, and how this trend will lead to a growing need for multi-disciplinary research collaborations between agronomists, ecologists, software programmers, and engineers."

“We propose extensive communication and collaboration between scientists from various disciplines, extension agents, industry professionals, and commercial growers to reach drones' optimal potential to help with pest management and control,” said De Lange, the corresponding author and a postdoctoral fellow in the Christian Nansen lab, UC Davis Department of Entomology and Nematology.

The paper covers the use of drones with remote sensing equipment, to detect pest problems from the air. It calls for the increased use of actuation drones, to provide solutions such as spraying pesticides and releasing biocontrol organisms. “Most literature concerns remote sensing,” said de Lange. Wieke Heldens, co-author
"Drones became indispensable for IPM programs in Brazil, specially for Biological Control," said lead author and entomologist Fernando Iost Filho of the Department of Entomology and Acarology, University of Sao Paulo, Brazil. "They are currently being used for releasing parasitoids in thousands of acres of field crops, such as sugarcane and soybean, said Filho, a former exchange student at UC Davis. "Their use for monitoring crop health is also expected to increase in the Brazilian fields in the next few years."

“Remote sensing equipment,” De Lange added, “can also be placed on manned aircraft and satellites. However, drones fly lower, increasing images' spatial resolution, and making clouds less of an issue. They are generally cheaper and can be flown more frequently. Compared to ground-based devices, drones can cover much more ground in a shorter period of time.” 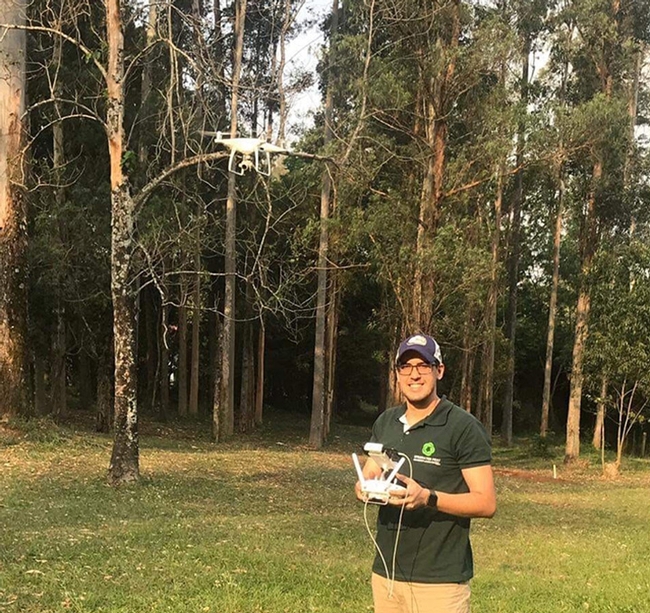 Lead author and entomologist Fernando Iost Filho of the Department of Entomology and Acarology, University of Sao Paulo, Brazil. He is a former UC Davis exchange student. 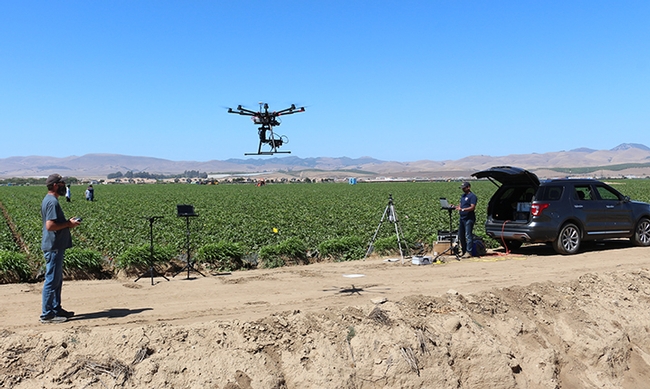 A drone fly: see the large eyes, stubby antennae and the "H" on its abdomen. (Photo by Kathy Keatley Garvey)
The drone fly is an identity thief.

It's often mistaken for a honey bee. Hey, isn't every floral visitor a bee? No, not by a long shot. One's a fly and one's a bee.

That came to mind last weekend when we saw a large  number of honey bees (Apis mellifera) and drone flies (Eristalis tenax) nectaring on Mexican sunflowers (Tithonia). The feeding frenzy brought back all the Internet images of mistaken identities.  And the arguments.

To the untrained eye, they look alike at first glance. They're both insects, they're about the same size, and they're both pollinators.

The drone fly, though, in its immature stage is a rat-tailed maggot that lives in drainage ditches, hangs out around manure piles and sewage, and its idea of a pool party is water that is badly polluted.

Honey bees gather nectar and pollen (and water and propolis) for their colonies. Nectar is their carbohydrate and pollen is their protein.

Drone flies mimic bees in color, size and nectaring behavior. They're actually hover flies, members of the family Syrphidae. Watch them hover over flowers like a helicopter.

Lately, we've been seeing an influx of drone flies in our little pollinator garden. Look closely at their large eyes and stubby antennae and you can easily distinguish them from honey bees. Then notice the "H" on their abdomen. Maybe that's "H" for hello? Or "H" for Halloween?  Or, or "H" as in "Hey, I'm not a bee! I just mimic a bee so you'll think I'll sting you." 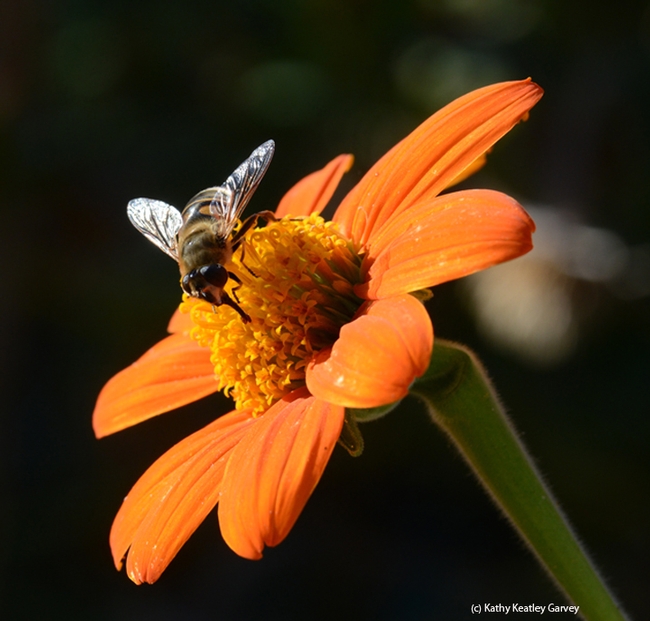 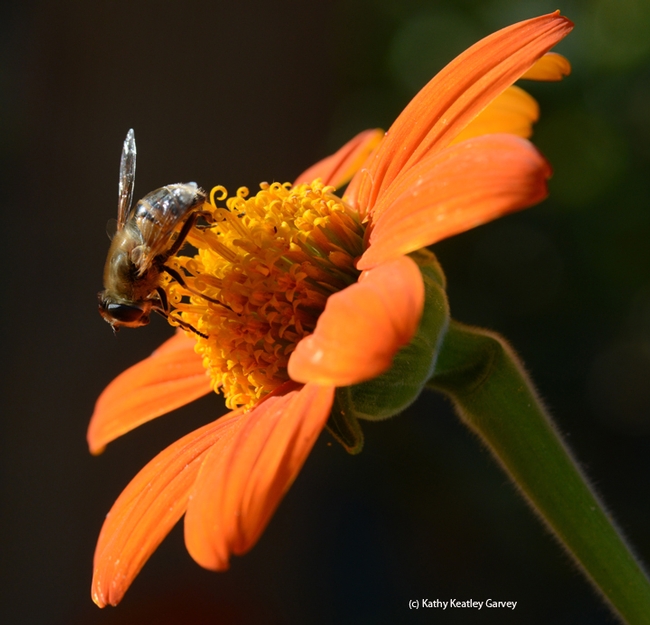 Side view of a drone fly. The fly is often mistaken for a honey bee. (Photo by Kathy Keatley Garvey) 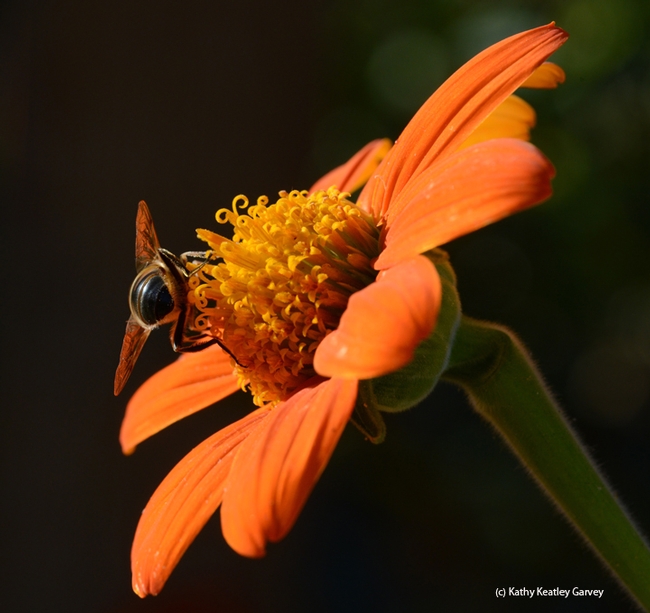 Over and out--this drone fly says it's time to go. (Photo by Kathy Keatley Garvey) 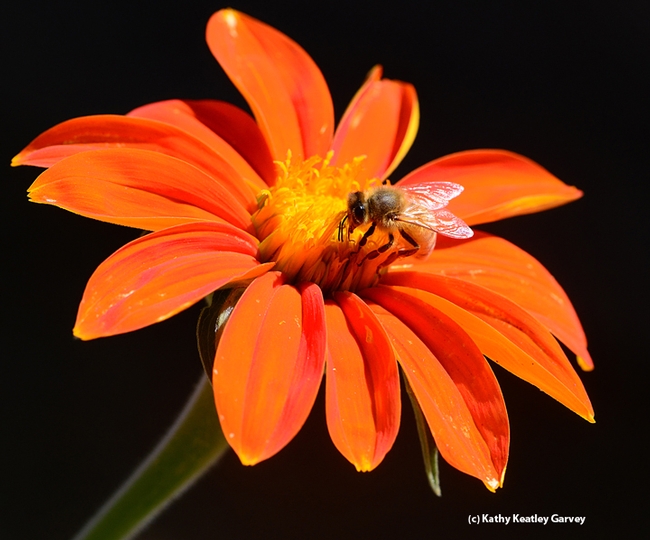 Worker bee heading home. (Photo by Kathy Keatley Garvey)
Pull up a chair and engage in a little "girl-watching."

That is, honey bees heading home to their colony.

Many beekeepers, especially beginning beekeepers, like to watch their worker bees--they call them "my girls"--come home. They're loaded with pollen this time of year. Depending on the floral source, it may be yellow, red, white, blue, red or colors in between.

Below, the girls are heading home to a bee observation hive located inside the conference room of the Harry H. Laidlaw Jr. Honey Bee Research Facility on Bee Biology Road, University of California, Davis.

They're bringing in food for the colony: pollen and nectar. They also collect water and propolis (plant resin). This is a matriarchal society where females do all the work in the hive. The worker bees--aptly named--serve as nurse maids, nannies, royal attendants, builders, architects, foragers, dancers, honey tenders, pollen packers, propolis or "glue specialists," air conditioning and/or heating technicians, guards and undertakers.

The glassed-in bee observation hive is indeed a popular and educational attraction to watch the queen lay eggs (she'll lay about 2000 eggs a day during peak season), the comb construction, honey production, pollen storage and all the other activities. The sisters feed the colony, including the queen and their brothers (drones). A drone's responsibility is solely reproduction, and that takes place in mid-air when a virgin queen takes her maiden flight. After mating, he dies. Done. That's it.

Meanwhile, life continues inside the hive. 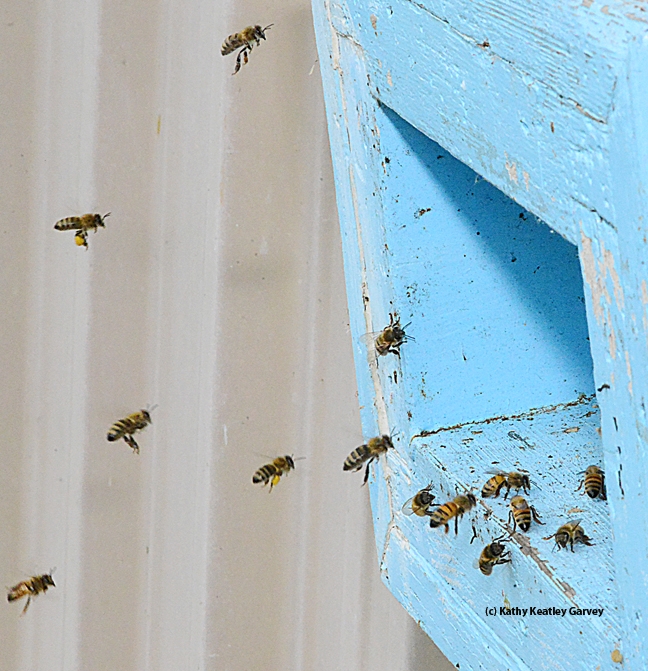 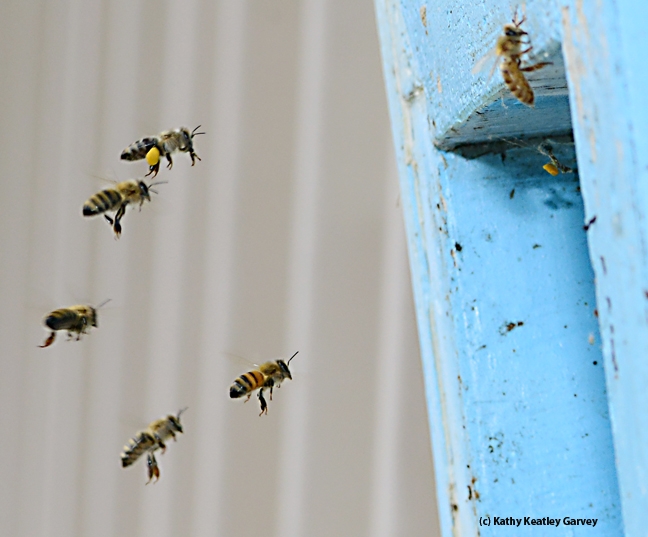 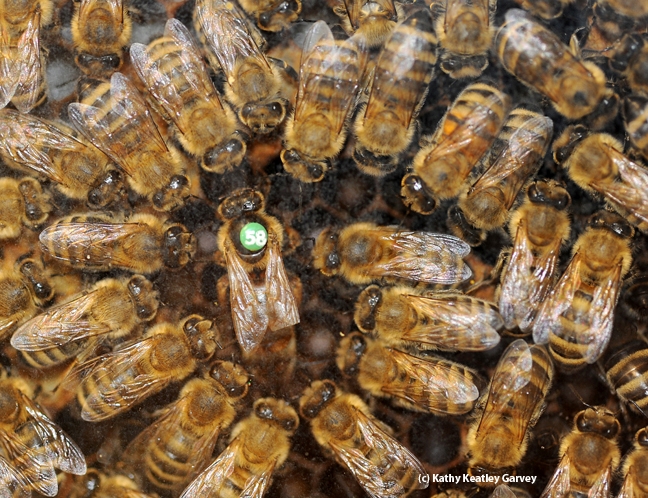 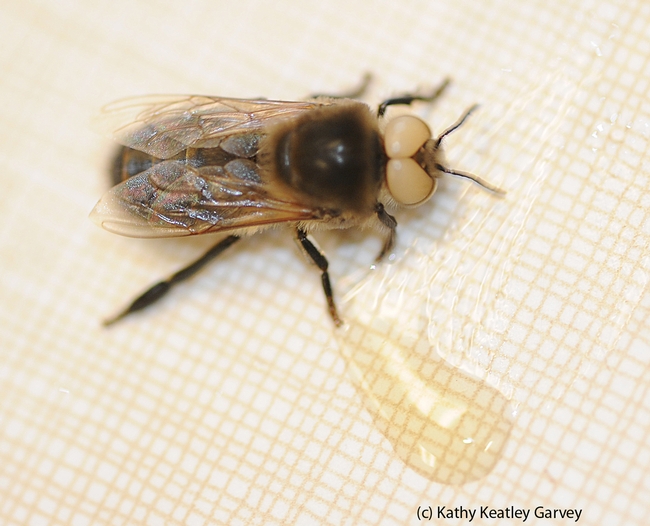 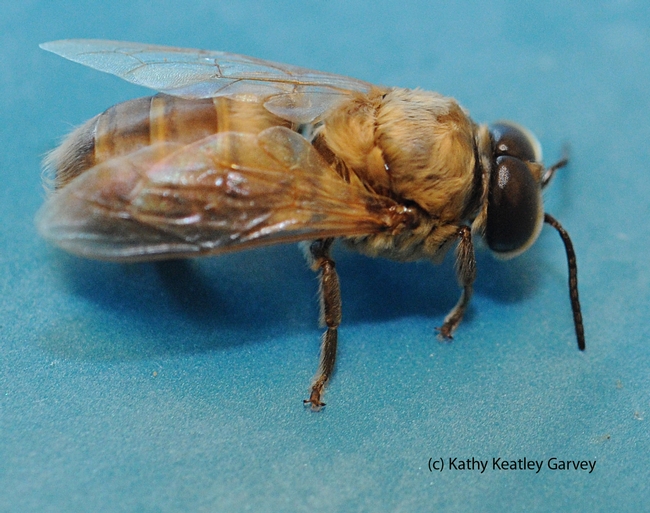 If you're looking for something to do tomorrow (Saturday, April 16), it's UC Davis Picnic Day, a campuswide annual event.

Over at Briggs Hall, Extension apiculturist Eric Mussen of the UC Davis Department of Entomology Department faculty will be offering a taste of honey to visitors. Actually, more than one taste of honey. First, there's the honey derived from orange blossoms, clover, cotton, starthistle and other plants that you can sample. And then there's the taste of honey via samples of Gimbal's Fine Candies, San Francisco. The company donates funds to UC Davis for honey bee research.

News flash: Mussen will be wearing his "Show Me the Honey" t-shirt.

Human beings aren't the only ones who love honey. Drones (male bees) do, too.

Several wound up by a window, and someone (yours truly) offered them a taste of honey. You think drones are fed only by their sisters, the worker bees? No. They can sip honey, too. 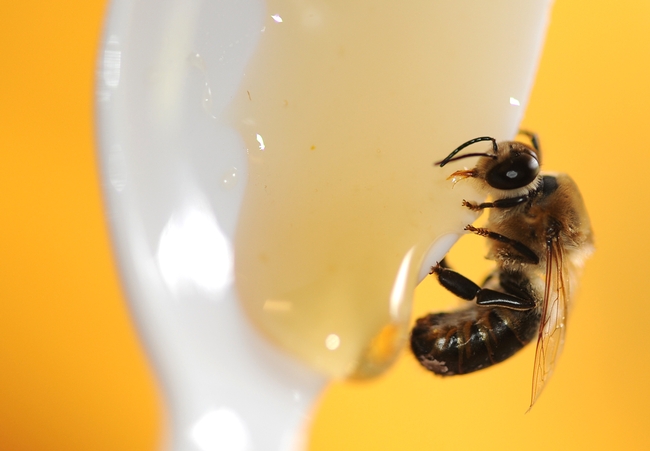