Robbin Thorp is a globally recognized for his expertise on bumble bees. He is a co-author of "Bumble Bees of North America: an Identification Guide" and "California Bees and Blooms: a Guide for Gardeners and Naturalists." (Photo by Kathy Keatley Garvey)
Research published today in the journal Nature about neonicintoid pesticide exposure and bumble bees is causing quite the buzz, and keeping noted bumble bee expert Robbin Thorp busy fielding phone calls.

Seeking his expertise, journalists are contacting Thorp, distinguished emeritus professor of entomology at the University of California, Davis, who maintains an office at the Harry H. Laidlaw Jr. Honey Bee Research Facility, and also works at the Bohart Museum of Entomology.

The research, by a team of six UK colleagues, indicates that neonics are hindering the pollination services of bumble bees. Corresponding author is Nigel E. Raine of the School of Biological Science, Royal Holloway University of London and his team wrote in the abstract:

"Recent concern over global pollinator declines has led to considerable research on the effects of pesticides on bees. Although pesticides are typically not encountered at lethal levels in the field, there is growing evidence indicating that exposure to field-realistic levels can have sublethal effects on bees, affecting their foraging behaviour, homing ability and reproductive success Bees are essential for the pollination of a wide variety of crops and the majority of wild flowering plants but until now research on pesticide effects has been limited to direct effects on bees themselves and not on the pollination services they provide. Here we show the first evidence to our knowledge that pesticide exposure can reduce the pollination services bumblebees deliver to apples, a crop of global economic importance. Bumblebee colonies exposed to a neonicotinoid pesticide provided lower visitation rates to apple trees and collected pollen less often. Most importantly, these pesticide-exposed colonies produced apples containing fewer seeds, demonstrating a reduced delivery of pollination services. Our results also indicate that reduced pollination service delivery is not due to pesticide-induced changes in individual bee behaviour, but most likely due to effects at the colony level. These findings show that pesticide exposure can impair the ability of bees to provide pollination services, with important implications for both the sustained delivery of stable crop yields and the functioning of natural ecosystems."

The researchers studied Thiamethoxam, one of the neonics.

Thorp, who was not involved in the research, is a global expert on bumble bees, as well as other bees. He co-authored Bumble Bees of North America: an Identification Guide (Princeton University) published in 2014, and California Bees and Blooms: A Guide for Gardeners and Naturalists (Heyday), also published in 2014.

The topic is quite controversial, but the importance of pollination is not. Inadequate pollination can lead to unfavorable effects on agricultural crop production.  For example, bumble bees may not forage on the apple blossoms as much or as long. That could lead to poor fruit quality and decreased apple production.

Why are bumble bees important? “They're extremely important in pollination of our native ecosystems, and many of them…are important contributors to crop pollination," Thorp told the Washington Post.

Bumble bees are known for their specialized pollination of tomatoes and watermelon, but they also pollinate many other agricultural crops.

Thorp points out that with the decline of the honey bee population, the work of other pollinators is becoming  increasingly crucial.

Thorp anticipates that the study will open doors for more research involving neonics and wild bees. "Even if the study can't be generalized to all bees or all crops, it raises more questions in the ongoing debate over pesticide use in the U.S.," Harvey pointed out in her news article.

“I think it's kind of a wake-up call to growers that they ought to be paying more attention to what they're putting on their crops,” Thorp told Harvey. “Because it's coming right out of their pocket as well if they're damaging the ability of pollinators that they rely on to pollinate their crops.”

Thorp has long been part of the mission to save the declining bumble bee population. He works closely on bumble bee conservation with Xerces Society for Invertebrate Conservation, headquartered in Portland, Ore.

The Xerces Society emphasizes the importance of bumble bees on it  website. ""Bumble bees are important pollinators of wild flowering plants and crops. They are generalist foragers, and thus do not depend on any one flower type. However, some plants rely on bumble bees to achieve pollination. Loss of bumble bees can have far ranging ecological impacts due to their role as pollinators. In Britain and the Netherlands, where multiple pollinator species have gone extinct, there is evidence of a decline in the abundance of insect pollinated plants."

"Bumble bees are able to fly in cooler temperatures and lower light levels than many other bees, which makes them excellent crop pollinators," according to Xerces. "They also perform a behavior called 'buzz pollination,' in which the bee grabs the pollen producing structure of the flower in her jaws and vibrates her wing muscles. This causes vibrations that dislodge pollen from the flower. Some plants, including tomatoes, peppers, and cranberries, benefit from buzz pollination." 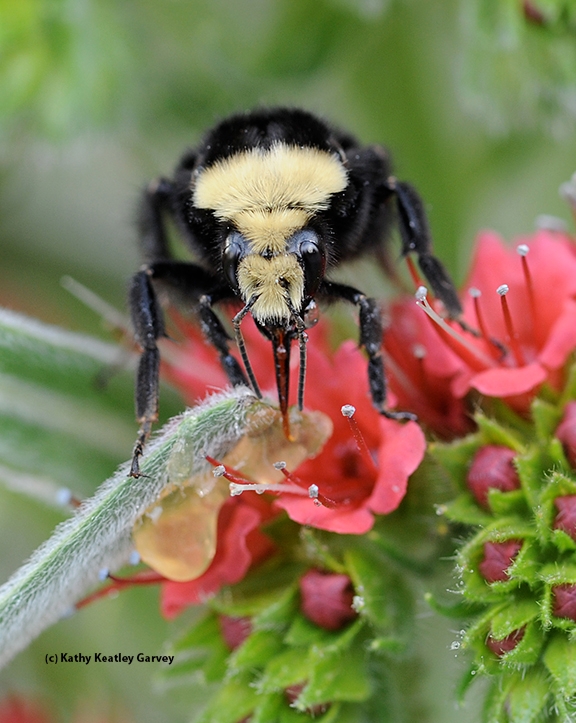 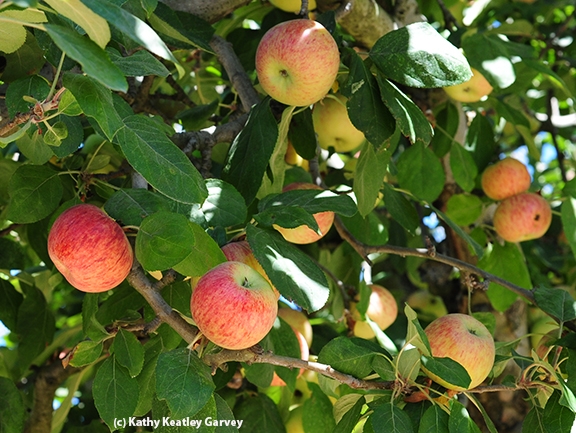 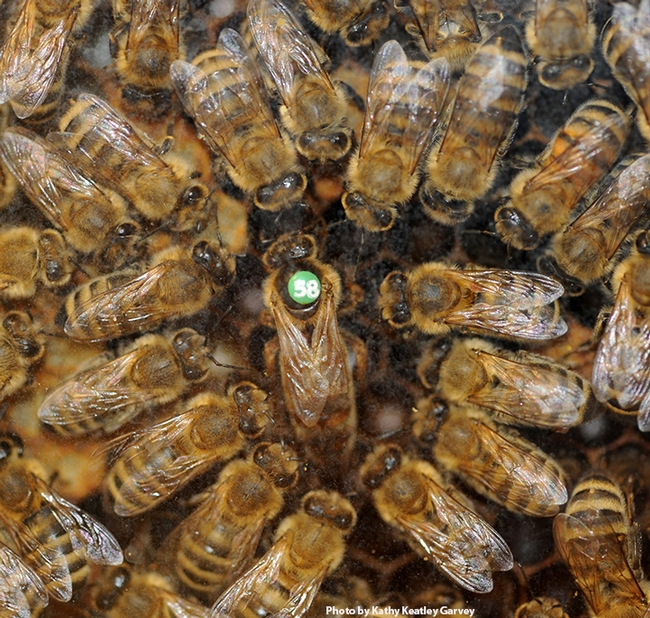 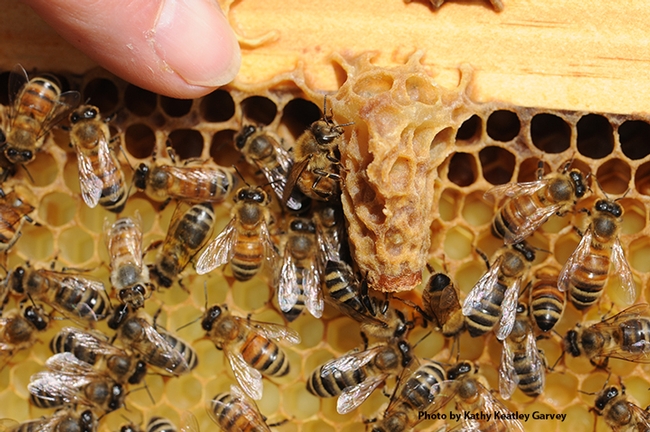 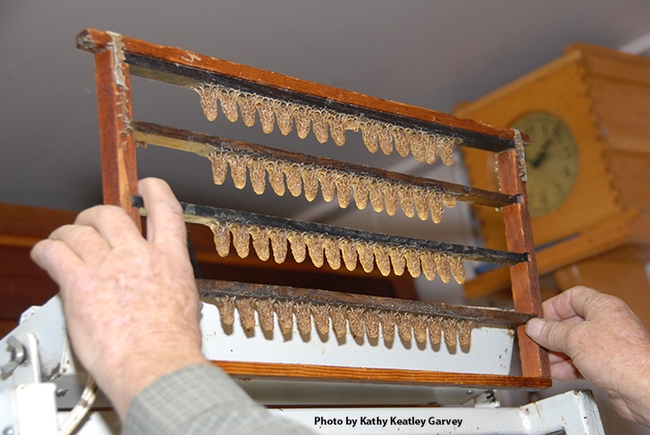 What exists in nature is replicated in art.

We sculpt them, draw them and paint them. We create their images on everything from clothing and jewelry to quilts and stepping stones. We never tire of their shapes, colors, textures and the extensive variety.

Many replicas find their way into exhibits at county fairs.

We saw more than a dozen "insects" today in McCormack Hall at the Solano County Fair, Vallejo. A butterfly morphs into a quilt. Another butterfly yields its shape for a stepping stone.  A honey bee transforms into a keychain. Dragonfly and ladybug decorations glide and crawl among the exhibits.

Insects reign supreme in sheer variety and abundance.  Scientists have recorded some million insects to date.  Millions of others await identification. In total volume, there could be as many as 200 million insects for every human on the planet. They're all around us.

Interesting that we seek beneficial insects for our gardens, but the "revolting ones" we set aside for horror movies. 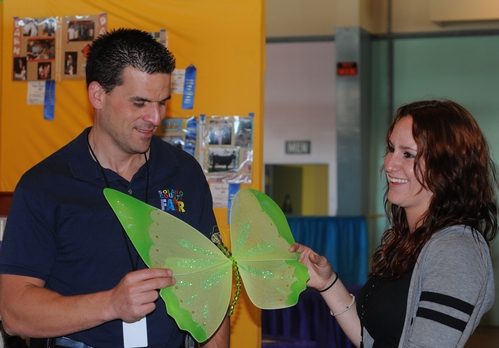 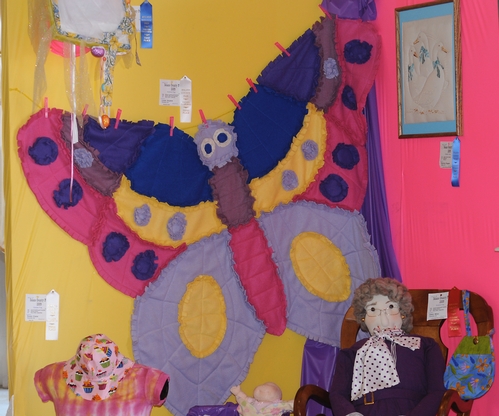 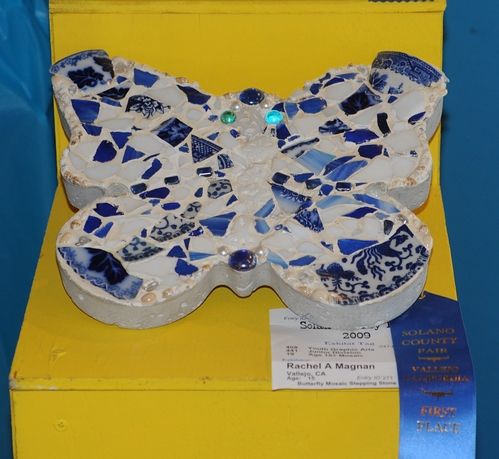 Stepping Stone
STEPPING STONE, shaped like a butterfly, draws interest at the Solano County Fair, Vallejo. This is the work of 15-year-old Rachel Magnan of Vallejo. (Photo by Kathy Keatley Garvey) 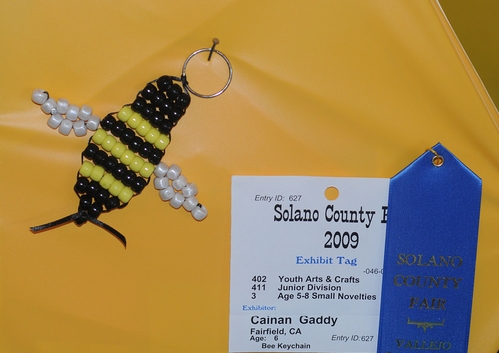