Professor Walter Leal, coordinator
The (Zika) virus is here, and so is the mosquito. The question is whether there will be enough of both to set off an epidemic.

That's what UC San Francisco medical student Joshua Lang wrote in his piece, With Summer Coming, Can the Zika Virus Be Contained?, published April 14 in The New Yorker.

"It is very important that students and the public-at-large learn how to prevent a possible Zika epidemic as this is the first virus known to be transmitted both sexually and by mosquitoes," said coordinator Walter Leal, a chemical ecologist and professor in the UC Davis Department of Molecular and Cellular Biology. Leal, who collaborates with fellow mosquito researchers in his native Brazil, is the co-chair of the International Congress of Entomology (ICE) meeting, to take place Sept. 25-30, 2016 in Orlando, Fla. Culex quinquefasciatus (Photo by Kathy Keatley Garvey)
The ICE conference is expected to draw some 7000 entomologists from all over the world, but Leal is worried about another draw--the blood draw of the Aedes aegypti (yellow-fever) mosquito.  And the concern over Culex mosquitoes as vectors. Aedes aegypti, the yellow-fever mosquito (CDC photo)
"We thought that we did not have the vector (the yellow mosquito), but now our research in collaboration with Brazilian scientists indicates that our local mosquitoes (Culex) are also competent vectors," Leal said. "And more and more we hear cases of travelers returning home infect with Zika virus. I am so glad that a group of 18 students who took my biochemistry class last quarter decided to launch this initiative to educate their peers and citizens of Davis about this dangerous virus."

A flier (below) distributed at the campuswide UC Davis Picnic Day noted that the "Zika virus is a risk to all of us, not just to pregnant women." At the May 26th symposium, folks will "learn the symptoms and learn the facts and science about Zika and how you can protect yourself from this disease."

The scientific-based symposium will include "expert panels and speakers throughout the United States and the world, including those working on the front lines of the Zika epidemic." Speakers will be announced soon.

Attendance to the symposium is free, but due to limited space, those planning to attend are asked to RSVP to ucdstudentsagainstzikav@gmail.com 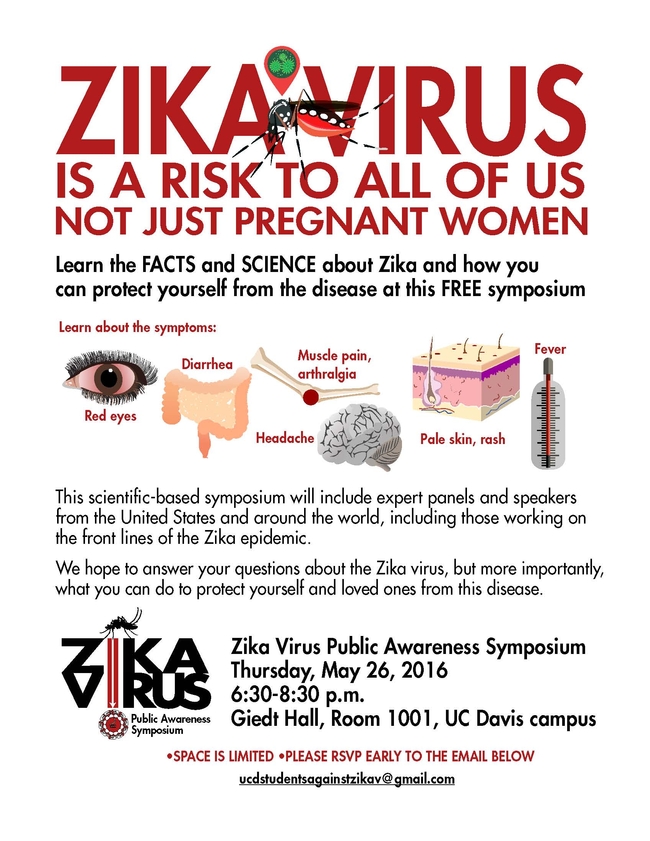