Sparks, a retired research fellow at Corteva Agriscience (a Dow AgroSciences) in Indianapolis, Ind., will receive an inscribed plaque and a cash award at ESA's annual meeting in November, to be held in Denver, Colo., announced Michelle Smith, ESA president. The presentation will take place Nov. 2 during ESA's Awards Breakfast featuring the Founders' Memorial Lecture.

“This is a huge honor and directly due to Bruce's influence,” said Sparks.

This award recognizes creative entomologists who have demonstrated the ability to find alternative solutions to problems that significantly impact entomology. Sparks is the first scientist from the crop protection industry to receive this award.

Sparks received his doctorate in entomology in December 1978. His emphasis: insect endocrinology/biochemistry and insecticide toxicology. UC Davis distinguished professor Bruce Hammock
“As a graduate student studying insect physiology and toxicology, Tom was amazingly innovative,” said Hammock, who holds a joint appointment with the Department of Entomology and Nematology and the UC Davis Comprehensive Cancer Center. “He was in the lab early, he stayed late and he 'sang while he worked.” (Sparks says he sang  "because no radios were allowed in the lab.")

“His free-thinking, as well as his love for and intensity about science, characterized his career," Hammock said. "I remember an evening when he brought a 'Tandy' computer over and envisioned a concept of machine learning to optimize structures of drugs and agricultural chemicals that were too complex to evaluate with classical structure activity relationships."

“Dr. Sparks is internationally recognized as a leader and innovator in the field of insect biochemistry and toxicology, especially as it relates to the discovery of new crop protection compounds,” wrote Ronda Hamm of Corteva Agriscience, Indianapolis, who headed the nomination team. “This latter point supported by his many awards relating to crop protection discovery but is highlighted in particular by two prior awards-- R&D Scientist of the Year in 2009, the first (and so far only) for any entomologist or for that matter, any scientist in the field of agriculture. More recently Dr. Sparks was the first industry scientist (and entomologist) to receive the American Chemical Society AGRO Division Innovation in Chemistry of Agriculture Award (2015).” Keith Wing, Bruce Hammock's second Ph.D student and longtime friend of Thomas Sparks
One example of “what if”:
“What if you could simplify large complex macrolide antibiotic-like compounds to make them synthetically accessible,” Hammock wrote in his letter of support. “This would be a radically different innovation paving a conceptual pathway for others in the agrochemical and pharmaceutical industry.  Dr. Sparks accomplished this through collaboration with two colleagues using computer-aided molecular design to essentially reverse-engineer the spinosyn structure ultimately demonstrating, for the first time ever, that the large macrocyclic structure could be mimicked by simpler, smaller synthetic motifs.”

Keith Wing, an independent industrial biochemistry consultant who was Hammock's second Ph.D student from UC Riverside and UC Davis (and who subsequently worked for Rohm and Haas Ag and DuPont Ag Chemicals and Central Research), also praised Sparks' accomplishments. "I've known Tom as a friend and colleague since 1976," Wing related. "We started our research in Bruce's lab working on proteins affecting juvenile hormone metabolism, but because of Bruce's/University of California's broad entomological and chemical training, we both developed multifaceted toxicological interests and methodological approaches to problems.  As Tom and I were grinding through course and benchwork on our research, we were getting a skill set and thinking mode that was very unusual in both its scope and depth.  I was always struck by Tom's creativity, dedication to his work and attention to detail.  Much of my own thesis work was built on the precedents Tom set."

"Through the years Tom and I remained close personal friends and would discuss what we saw happening in the agrochemical industry, often through American Chemical Society AGRO division work," Wing said, lauding "Tom's variety and volume of contributions to insecticide science. For an industrial entomologist/biochemist, Tom is an unusually prolific contributor to both patent and scientific literature, and is an editor of relevant scientific journals."

"Tom is an excellent colleague to his peers and mentor to younger scientists in our field," Wing said, "and has made huge societal contributions, such as his work in the Insecticide Resistance Action Committee (IRAC), providing discipline and structure in an important area of agricultural science."

Sparks is the second Hammock lab alumnus to receive the coveted Nan-Yao Su Award. ESA selected Bryony Bonning, a former postdoctoral researcher in the Hammock lab and now a professor at Iowa State University, for the award in 2013. Walter Leal, former chair of the entomology department and now a UC Davis distinguished professor with the UC Davis Department of Molecular and Cellular Biology, won the award  in 2011. 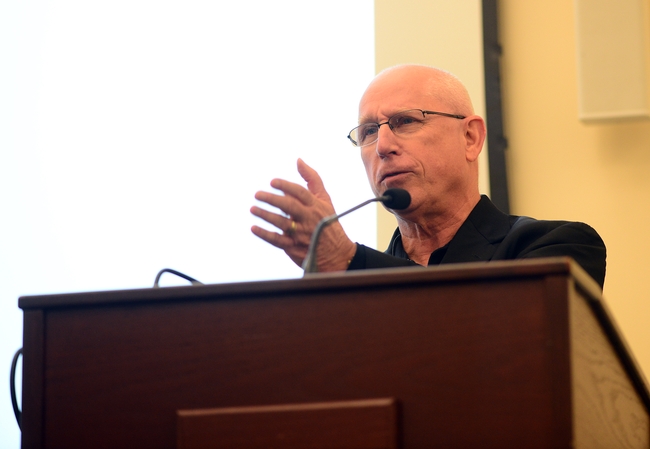