Agrawal is one of 120 newly elected members,  of which 59 are women. The number of NAS members now totals 2,461, according to NAS president Marcia McNutt.

At Cornell, Agrawal researches the ecology and evolution of interactions between wild plants and their insect pests, including aspects of community interactions, chemical ecology, coevolution and the life cycle of the monarch butterfly.

Agrawal authored the celebrated book, Monarchs and Milkweed: A Migrating Butterfly, a Poisonous Plant, and Their Remarkable Story of Coevolution, published in 2017 by Princeton University Press. He investigated "how the monarch butterfly has evolved closely alongside the milkweed—a toxic plant named for the sticky white substance emitted when its leaves are damaged—and how this inextricable and intimate relationship has been like an arms race over the millennia, a battle of exploitation and defense between two fascinating species," according to the publisher.

The book won a 2017 National Outdoor Book Award in Nature and Environment and an award of excellence in gardening and gardens from the Council of Botanical and Horticultural Libraries. It was also named one of Forbes.com's 10 best biology books of 2017.

“It's a tremendous honor and totally unexpected,” Agrawal told the Cornell Chronicle in a recent news release. “I look forward to representing Cornell and also playing a part in the NAS role of advising the U.S. government on science policy.”

"A key research focus for Agrawal's Phytophagy Lab is the generally antagonistic interactions between plants and insect herbivores," according to the news release. In an attempt to understand the complexity of communitywide interactions, questions include: What ecological factors allow the coexistence of similar species? And what evolutionary factors led to the diversification of species? Agrawal's group is currently focused on three major projects: the community and evolutionary ecology of plant-herbivore relationships; factors that make non-native plants successful invaders; and novel opportunities for pest management of potatoes. Recent work on toxin sequestration in monarch butterflies was featured on the cover of the April 20 issue of Proceedings of the National Academy of Sciences."

Members are elected to NAS in recognition of their distinguished and continuing achievements in original research. Membership is a widely accepted mark of excellence in science and is considered one of the highest honors that a scientist can receive. Among those elected to NAS: Bruce Hammock, UC Davis distinguished professor of entomology who holds a joint appointment with the UC Davis Comprehensive Cancer Center. He was elected to NAS in 1999.

Agrawal holds two degrees from the University of Pennslvania, a bachelor's degree in biology and a master's degree in conservation biology. He joined the Cornell faculty in 2004 as an assistant professor of ecology and evolutionary biology, with a joint appointment in the Department of Entomology. He advanced to associate professor in 2005, and to full professor in 2010. He was named the James A. Perkins Professor of Environmental Studies in 2017.

Read a review of his Monarchs and Milkweed book from the journal Ecology and read the first chapter here. You can order the book here. 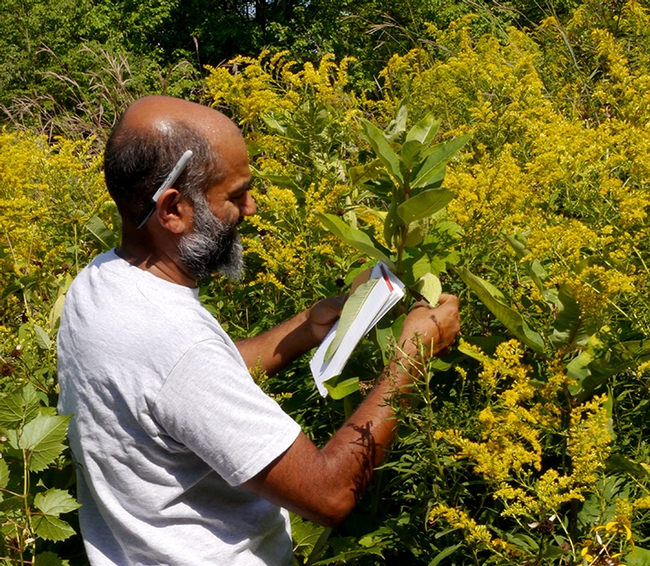