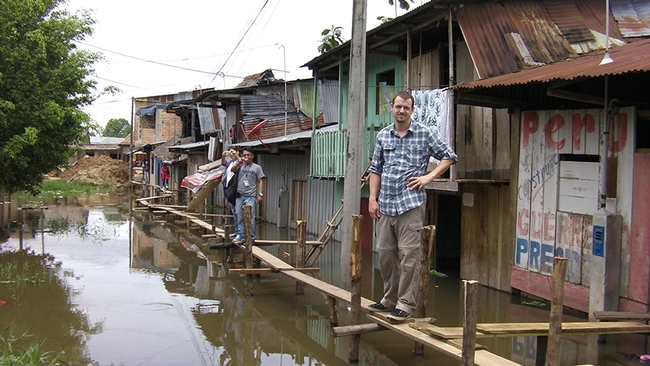 UC Davis dengue researcher Sandy Ohlkowski (center, with name tag) chats with participants at the fifth annual American Society of Tropical Medicine Hygiene/Peru meeting. She presented her research at the meeting.
DAVIS--Dengue patients in Iquitos, Peru with even a mild form of the disease are suffering not only physically but economically, says dengue researcher and doctoral candidate Sandy Olkowski of the Thomas Scott Lab, Department of Entomology and Nematology, University of California, Davis.

If a patient is the sole wage earner in the family, lost wages can amount to a third of the monthly household income.

Olkowski recently gave a presentation on the "Economic Impact of Work Absenteeism Due to Dengue Fever in Iquitos, Peru” at the fifth annual American Society of Tropical Medicine Hygiene/Peru meeting.

“Over a quarter of the laboratory-confirmed patients fell significantly below Peru's minimum monthly wage,” Olkowski said. “In the wage group with the highest rate of dengue, lost wages due to dengue illness represented more than 25 to 30 percent of their monthly income. It's also important to note that we included only wage-earners, whereas the majority of women work in the home and are not earning a wage, so these are one-income households.” Iquitos, Peru. (Photo courtesy of the Tom Scott lab)
Olkowski and research physician Stalin Vilcarromero of the U.S. Naval Medical Research Unit No. 6 (NAMRU-6), looked at lost work days due to non-severe dengue. UC Davis and NAMRU-6 are long-term collaborators. Although Olkowski is a Ph.D candidate, the research was not part of her dissertation.

“In this project, Dr. Vilcarromero and I quantified one aspect of the 'hidden economic burden' of dengue in Iquitos,” she said. “A lot of attention is being given to the economic impact of hospitalized dengue cases but that's not the full story. Our research demonstrates that even when dengue is technically a ‘mild' illness, the people who live with it are suffering not only physically but economically.”

“For this study, we looked at how lost work days due to non-severe dengue affects people,” Olkowski said, explaining that in Iquitos, most families have a single wage earner and receive little or no paid sick leave. “Thus, taking a sick day can mean less support for their families.”

“We considered only patients who went to a clinic but were not hospitalized and who were laboratory confirmed for dengue serotype 4,” she said. “That is generally considered to cause mild, ambulatory illness so that would probably not be taken too seriously from an economic impact standpoint.” Aedes aegypti, the dengue mosquito. (CDC Photo)
Of the conference, which drew participants from all over Latin America and the United States, Olkowski said: “It was a really exciting opportunity for Peruvian-driven science to be presented in Peru.”

This was her third trip to Iquitos. On each of the first two trips, she did research for about two months, and has now been in Iquitos for seven months.

Olkowski, who is seeking her doctorate in entomology with a major interest in medical entomology and public health, expects to graduate in the summer of 2016. She holds a bachelor's degree in economics from UC Davis.

The world-class Thomas Scott lab studies the dengue virus, which is transmitted by Aedes aegypti, a daytime-biting mosquito. The dengue virus has been spreading globally over the last four decades, including parts of United States. More than half of the world's population is now at risk of infection. The disease infects 400 million people each year.

Scott, distinguished professor of entomology and director of the Mosquito Research Program, is the principal investigator of two grants totaling nearly $10 million to study the mosquito-borne, viral illness.

The grants, awarded in 2014, include $7.5 million from the National Institutes of Health (NIH) and $2.2 million from Notre Dame University.

The $2.2 million grant, “Spatial Repellants for Control of Vector-borne Disease,” from Notre Dame University, is the first-ever project aimed at dengue prevention. It focuses on studying the potential for spatial insect repellants to reduce exposure to dengue virus in people's homes.

The NIH grant, “Quantifying Heterogeneities in Dengue Virus Transmission Dynamics,” aims to quantify how much people, with different degrees of illness, vary in their contribution to virus transmission and spread. 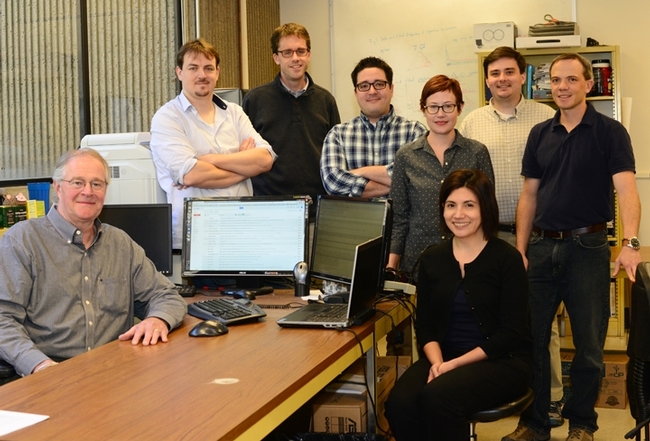 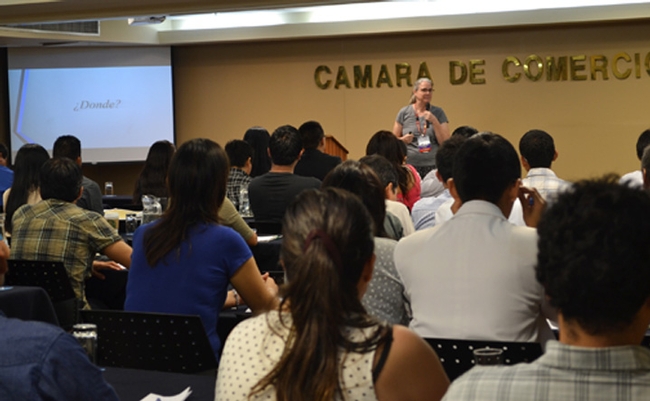