Eric Mussen in the apiary of the Harry H. Laidlaw Jr. Honey Bee Research Facility. (Photo by Kathy Keatley Garvey)
For 38 years, Extension apiculturist Eric Mussen did everything he could to help the honey bees.

“I am basically all pro-bee; whatever I can do for bees, I do it,” Mussen told the American Bee Journal in a two-part interview published in 2011. “It doesn't matter whether there is one hive in the backyard or 15,000 colonies. Bees are bees and the bees' needs are the bees' needs.”

Today a nationally awarded plaque “bee-speaks” of his work.

Mussen is the recipient of the 2018 Founders' Award from the Foundation for the Preservation of Honey Bees, presented Jan. 12 at the 75th annual American Beekeeping Federation (ABF) conference in Reno.

“He received a well-deserved rousing standing ovation!” said president Gene Brandi of Los Banos, who presented him with the plaque and praised him as a outstanding liaison between the academic world of apiculture and real world beekeeping and crop pollination. A close-up of the plaque that Eric Mussen received on Jan. 12 at the American Beekeeping Federation conference. (Photo by Kathy Keatley Garvey)
The ABF is a 4700-member national organization dedicated to ensuring the future of the honey bee, Brandi said. The Foundation for the Preservation of Honey Bees, headed by president Joan Gunter of Towner, N.D., is a charitable research and education foundation that aims to preserve and protect honey bees.

For 38 years, Mussen wrote and published the bimonthly newsletter, from the UC Apiaries, and short, topical articles called Bee Briefs, providing beekeepers with practical information on all aspects of beekeeping.  His research focused on managing honey bees and wild bees for maximum field production, while minimizing pesticide damage to pollinator populations.

“Eric is a worldwide authority on honey bees, but no problem is too small and no question too involved for him to answer,” said the late Extension entomologist Larry Godfrey prior to Mussen's retirement. “He devotes his research and extension activities to the improvement of honey bee health and honey bee colony management practices. Eric helps growers, consumers, UC Farm Advisors, agricultural commissioners, scientists, beekeepers, researchers, pesticide regulators, 4-H'ers, and state and national agricultural and apicultural organizations. He ignites their interest in maintaining the health of bees, cultivates their friendship, and generously gives of his time and intellect.”

His other awards include the 2013 Alexander Hodson Graduate Alumni Award from the University of Minnesota; and the 2014 Distinguished Service Award for Outstanding Extension from the UC Agriculture and Natural Resources (UC ANR).

As Extension apiculturist, he served on various committees and task forces of state and national organizations, reviewed numerous manuscripts for journals; reviewed annual research proposals to the California State Beekeepers' Association, the Almond Board of California, and the National Honey Board; and reviewed Small Business Innovation Research applications at the federal level. He assisted U.S. beekeepers in writing letters to receive compensation from the U.S. Department of Agriculture for their CCD bee losses.

Mussen turned down a football scholarship at Harvard to attend the University of Massachusetts, Amherst, where he obtained his bachelor's degree in entomology. This is also where he met Helen, his wife of 48 years. He holds a master's degree and doctorate in entomology from the University of Minnesota, St. Paul. His doctoral research focused on the epidemiology of a viral disease of larval honey bees, sacbrood virus.  "During those studies I also was involved in studies concerning sunflower pollination and control of a microsporidian parasite of honey bees, Nosema apis," Mussen recalled.  "Now a new species of Nosema has displaced N. apis and is even more difficult to keep subdued."

William Hutchison, professor and head of the Department of Entomology at the University of Minnesota, commented in 2013 that Mussen tackled many new challenges--mites, diseases, and Africanized honey bees, to name a few--to enhance the pollination success of California's diverse agricultural cropping systems, with considerable emphasis on almonds. In brief, he is in demand, and he continues to be a primary source for objective information on honey bee health and pollination in California.”

Today, in between his family commitments (he and his wife have two sons and two grandchildren) Mussen engages in birding, singing doo-wop and reviewing grant proposals: he reviews funding proposals for Project Apis m., which makes funding decisions and handles the funds for the National Honey Board and other entities; and serves on the scientific review panel for the Bee Informed Partnership (BIP) organization, which reviews funding requests of tech teams.

(Editor's Note: the new Extension apiculturist is Elina Lastro Niño, who holds a doctorate in entomology from Pennsylvania State University.) 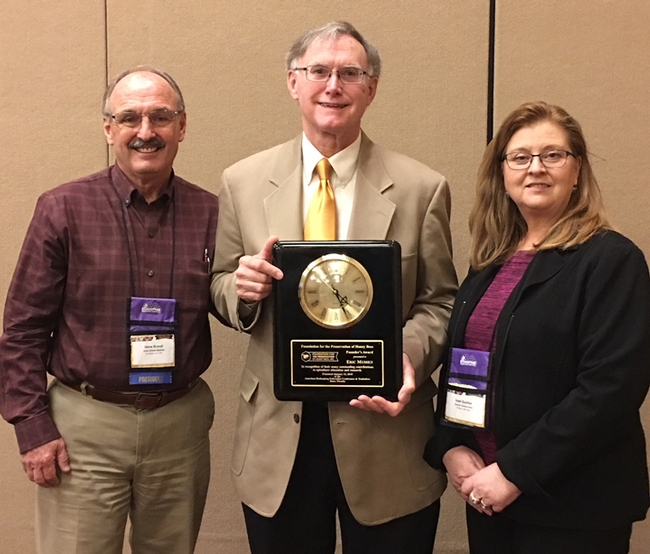 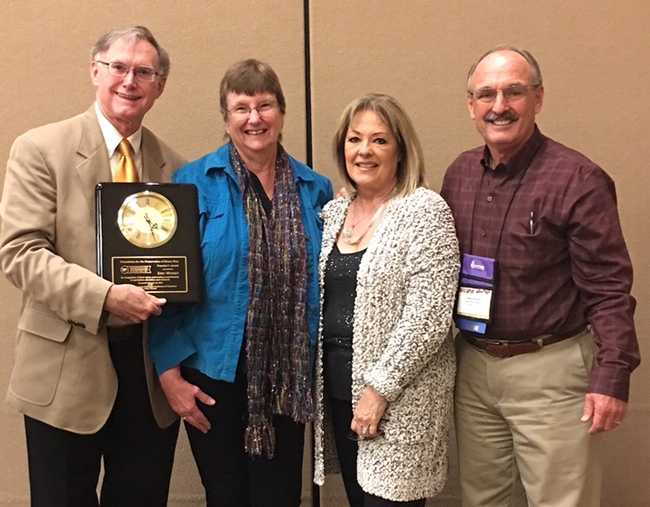 Eric and Helen Mussen (at left) of Davis with Gene and Christine Brandi of Los Banos. This image was taken shortly after Mussen received a standing ovation. 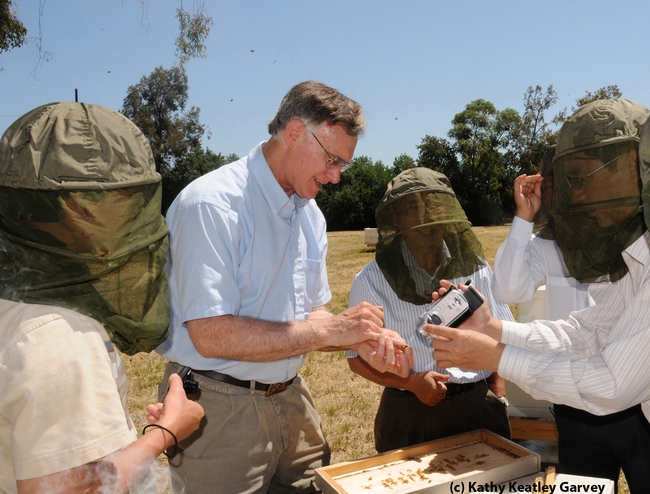