Jeff Smith specializes in spreading and pinning butterflies and moths for the Bohart Museum collection. (Photo by Kathy Keatley Garvey)
In commemoration of National Moth Week, the Bohart Museum of Entomology is planning a Virtual Moth Open House from 1 to 2 p.m. on Saturday, July 25.

Due to the COVID-19 pandemic, this is the Bohart Museum's first-ever Virtual Moth Open House.

“We started holding a moth-themed open house near Mother's Day in May, because people who are enthusiasts for moths are called moth-ers,” said Tabatha Yang, education and outreach coordinator for the Bohart Museum. “We then switched our programming to align with National Moth Week. This year's Moth Week is July 18-26. The annual event is celebrated throughout the world with private and public events.

Smith received a 2015 Friend of the College Award from the UC Davis College of Agricultural and Environmental Sciences for saving the museum some $160,000 over a 27-year period through his volunteer service. Close-up of Jeff Smith pinning a moth. This is a tiger moth, Ctenucha rubroscapus. (Photo by Kathy Keatley Garvey)
Lynn Kimsey, director of the Bohart Museum and UC Davis professor of entomology, nominated Smith for the award. “You could not ask for a better friend than Jeff Smith,” she said, noting that he has “brought us international acclaim and saved us $160,000 through donations of specimens and materials, identification skills and his professional woodworking skills. This does not include the thousands of hours he has donated in outreach programs that draw attention to the museum, the college and the university.”

The Bohart Museum, located in Room 1124 of the Academic Surge Building, Crocker Lane, UC Davis campus,  houses a global collection of nearly eight million specimens. It is also the home of the seventh largest insect collection in North America, and the California Insect Survey, a storehouse of the insect biodiversity. Noted entomologist Richard M. Bohart (1913-2007) founded the museum. 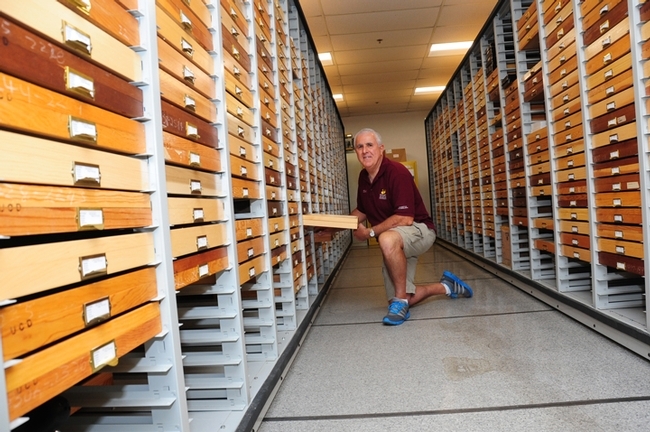 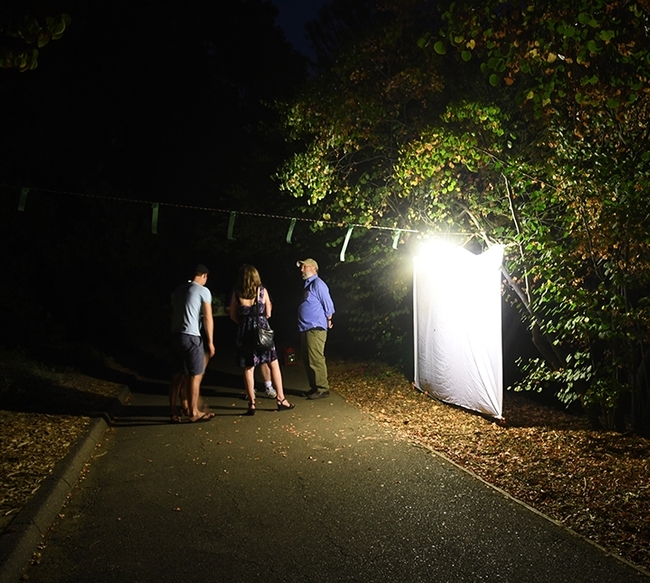