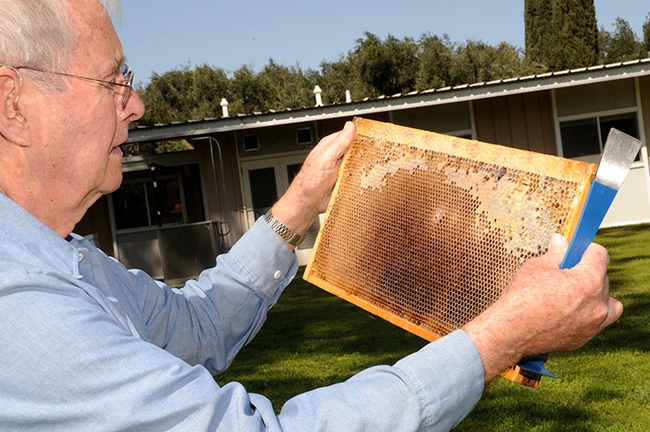 Elina Lastro Niño
DAVIS--“Honey bees are good teachers and we can all learn from them,” says Elina Lastro Niño, California's new Extension apiculturist. “Each hive has its own personality and own temperament.”

Niño, who joined the UC Davis Department of Entomology and Nematology on Sept. 1 from Pennsylvania State University—2600 miles away--is as busy as the proverbial worker bee during a colony's spring buildup as she settles into her new position involving research, education and outreach.

“California is a good place to bee,” she said. “I just wish I could have brought some of that Pennsylvania rain with me to help out California's drought.” Now she is looking forward to the almond pollination season, which brings some 1.5 million colonies from all over the country to California's almond orchards.

Niño operates her field lab at Harry H. Laidlaw Jr. Honey Bee Research Facility on Bee Biology Road and at her campus lab in Briggs Hall, on the central campus. Her aims: to conduct practical, problem-solving research projects; to support the state's beekeepers through research, extension and outreach; and to address beekeeper and industry concerns.

One of the most common questions: “Do you get stung?” Answer: “Yes, many times.”

Some don't know that all worker bees are females, that they do all the work. They are fascinated with the queen bee, which can lay as many as 2000 eggs a day during peak season. Once a youngster, thinking about the queen bee, asked: “What happened to the king?”

Elina Niño wasn't always so devoted to bees. Born and reared in Bosnia in Eastern Europe, Elina moved to the United States with plans to become a veterinarian. She obtained her bachelor's degree in animal science at Cornell University, Ithaca, N.Y., but while there, enrolled in an entomology class on the recommendation of her advisor. “I was hooked,” she recalled.

Niño is now settled in Davis with her husband, Bernardo Niño, a former senior research technologist in the Grozinger lab and now a staff research associate at the Laidlaw facility; their toddler son, Sebastian; and their dog, a Doberman named Zoe.

Bernardo, who managed some 40 to 50 colonies at Penn State, received his bachelor's degree in biology from St. Edward's University, Austin, Texas; and his master's degree in entomology from North Carolina State University, Raleigh, NC.

Her lab not only aims to conduct applied research that leads to practical solutions, but to alert the state's beekeepers about new research, and develop web-based educational tools. She write the bimonthly newsletter, “from the UC apiaries,” appearing on the UC Davis Department of Entomology and Nematology's website. In addition, she will be serving on various advisory boards to allow “us to guide decision making and legislation based on the most up to date scientific information.”

Now she and her “Bee” team--that is, Bernardo and Billy--are gearing up for their inaugural queen bee rearing short-course March 28-29 at the Harry H. Laidlaw Jr. Honey Bee Research Facility. It is open to beekeepers with basic bee experience who want to learn more about rearing queens.

Another pending activity: she'll be judging the California 4-H Honey Bee Essay Contest, “Planting for Bees from Backyards and Up” (http://preservationofhoneybees.org/essays) next February. The contest closes Feb. 20.

Meanwhile, Niño has set up her lab's website at http://elninobeelab.ucdavis.edu/; a Facebook page at https://www.facebook.com/elninolab and has obtained an easy-to-remember email, elnino@ucdavis.edu.

“California is a good place to bee,” she reiterated.