The lygus bug is a pest of strawberries, as well as cotton and seed crops, including alfalfa. (Photo by Kathy Keatley Garvey)
Agricultural entomologist Emily Bick, who received her doctorate in entomology last year from UC Davis and is now a postdoctoral fellow at the University of Copenhagen, is a newly selected recipient of an American Association of University Women (AAUW) American Publishing Grant.

Bick's application focused on her scientific modeling work that originated from her Ph.D. program: investigating the lygus bug immigration and aggregation in California strawberries. Lygus hesperus, a serious pest of strawberries--as well as cotton, and seed crops such as alfalfa-- causes an estimated $40 million in annual losses to California's strawberry industry.

Bick's application detailed the academic women who supported her career, including one of her mentors, Cornell University entomology professor Laura Harrington. Additionally, women students she mentored while at UC Davis provided letters of support.

“Prior to receiving this good news, my fiancé, Nora Forbes, and I decided to get married in the historic home of the AAUW in St. Paul, Minn.,” Bick said. “We are both aware of AAUW's legacy of supporting women in their academic pursuits since 1881 and wanted to celebrate in a location in line with their pioneering vision.”  Forbes is a statistician at the Danish Medtronic office.

As a postdoctoral fellow at the University of Copenhagen, the UC Davis alumnus is a member of Professor Lene Sigsgaard's research team.  She received a $244,000 postdoctoral  grant from the Danish Innovations Fund to estimate insect population dynamics in relation to FaunaPhotonics's LIDAR insect sensor. LIDAR stands for light detection and ranging. 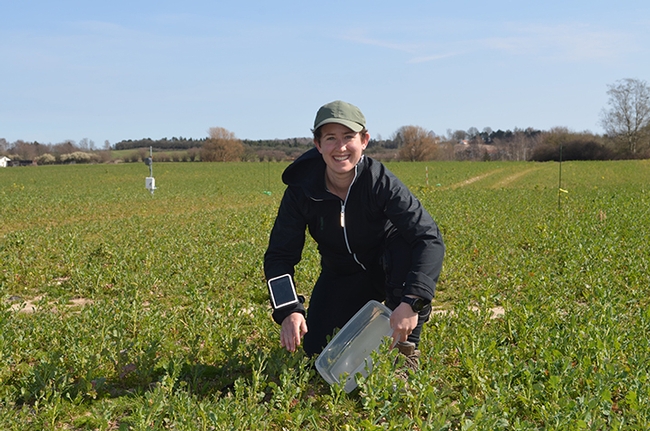 Honey bee pollinating strawberry blossom. (Photo by Kathy Keatley Garvey)
Extension advisor Surendra Dara who specializes in entomopathology and integrated pest management (IPM) of strawberries and vegetable crops, will speak on "Thinking Outside the Cubicle to Provide Practical Solutions to the Farmers" at the UC Davis Department of Entomology and Nematology seminar from 12:10 to 1 p.m. on Wednesday, Oct. 15 in 122 Briggs Hall.

Host is Michael Parrella, professor and chair of the Department of Entomology and Nematology.

In his role as the strawberry and vegetable crops advisor, Dara primarily looks after pest management, but also works on disease, irrigation, weed, and nutrition management issues.  As an IPM advisor, he contributes to the IPM solutions of various crops grown in California.  "My research focuses on developing IPM solutions with the goal to balance the use of chemical and non-chemical alternatives for pest management," he said. He serves as a resource person for microbial control of various pests.

Dara is a member-at-large of the Pacific Branch of the Entomological Society of America; a trustee of the Society for Invertebrate Pathology, and the vice chair for S1052, the national working group on improving microbial control of arthropod pests.  He also chairs the UC Cooperative Extension Strawberry Working Group.  In addition, Dara has served on the faculty of the University of Phoenix, California, since 2008.

The Extension advisor has written 19 scientific articles in peer-reviewed journals, one book chapter, 34 articles in other journals, and 117 extension articles.  He has delivered several presentations worldwide.  He has trained strawberry growers in India, Kosovo, Moldova, and Transnistria, and also lends his expertise to strawberry industries in a number of countries.

After receiving his doctorate, Dara served as an entomopathologist from 1996-1999 for the Plant Health Management Division, International Institute of Tropical Agriculture under the United Nations Development Program, Cotonou, Republic of Benin in West Africa. He was a post-doctoral research associate from 2003-2004 with the Department of Biology and Biochemistry, University of Houston, and an independent software consultant, 2001-2003.

His other work experience includes assistant project scientist, 2005-2006, with the UC Davis Department of Nematology (now the Department of Entomology and Nematology), and quality control manager-ISO (International Organization for Standardization) from 2006 to 2009 for Certis, USA, Wasco.

Dara's seminar will be recorded for later viewing on UCTV. 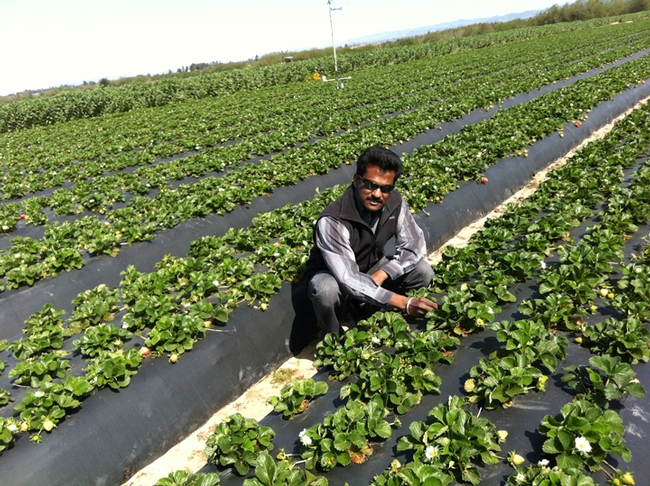