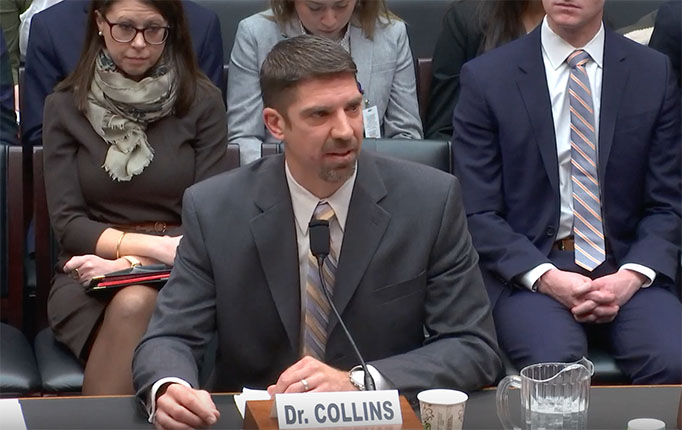 The hearing, titled “Out of Control: the Impact of Wildfires on Our Power Sector and the Environment,” included testimony from industry officials and specialists on a range of issues including wildfire, forest management, air quality, changing climate, and the power sector.

Brandon Collins, a forest scientist in the Stephens Lab and the Berkeley Forests group, discussed how forests historically had frequent fire of low- to moderate-severity but that a century of logging and fire suppression severely altered the landscape. He noted that the condition of contemporary forests—which now regularly experience large-scale tree mortality from such events as insect outbreaks and drought—need diverse management approaches to prevent more severe wildfires.

“Our great challenge is to manage forests such that they can tolerate fire, even under more extreme weather conditions, and still retain their fundamental character,” wrote Collins in his testimony.

Collins pointed to increases in tree density, greater amounts of dead biomass, the loss of larger trees, and increasingly homogenized vegetation patterns as factors that contribute to the greater intensity of wildfires. He said that—against a backdrop of complex land management, ownership, and societal constraints—forest managers must employ a diversified approach to forest restoration, even as climate change exacerbates many problems.

“Our current rate of forest restoration is falling woefully short of what is needed in these forests,” commented Collins. “It is time to prioritize forest health and resilience, even over other resource concerns, in order to ensure their continued provisioning of services we depend on.”

The subcommittees' full hearing can be viewed on the U.S. House Committee on Energy and Commerce website. The full testimony from Brandon Collins can be read here.

Most homes that burn during wildfires are ignited by flying embers landing on combustible material on or near homes. A wildfire passes by a home quickly, usually in a few minutes, while the exposure to flying embers can last for an hour or more. Therefore, activities homeowners undertake to make their home less ignitable from embers do the most to ensure its survival.

The most important home upgrade homeowners can do to reduce wildfire risk is to replace wood shake roofs with Class A roofs. Single-paned windows should also be replaced with dual-pane windows (with at least one pane being tempered). Combustible siding can also be vulnerable, but replacing it with non-combustible siding is less important if you have done a good job of locating and maintaining vegetation near your home. Replacing combustible decks with noncombustible decking products will also reduce risk.

Even though these upgrades are expensive, they reduce the likelihood that you will experience the cost and trauma of losing a home in a wildfire. If you cannot afford to undertake these projects this year, there are less expensive projects you can take on to reduce wildfire risk. These center on maintaining your home in good condition by replacing worn boards , sealing cracks in locations where embers can enter the home, and protecting vulnerable areas with non-combustible materials and coverings.

Even if you have already upgraded your home to resist fire by installing a new roof, windows, or deck, it is important to maintain those home components in their proper condition so embers cannot gain entrance to the home. Creating defensible space by clearning flammable vegetation and debris is also crucial to reducing your wildfire risk. For more information on the performance of building materials in a wildfire, please see http://firecenter.berkeley.edu/ or www.extension.org/surviving_wildfire. For more on creation of defensible space, contact your local fire agency. Homeowner installing screens under a deck to reduce the likelihood of ember intrusion
during a wildfire. Photo by Steve Quarles. Last week I visited Trinity River Lumber (TRL), a sawmill, in Weaverville, California.  The sawmill was almost totally destroyed by a fire in September 2009 and completed rebuilding in January this year.  The mill is the largest private employer in Trinity County with approximately 115 full time jobs.  The community was relieved that TRL’s owner chose to rebuild the mill after the fire.  The new mill is impressive in its versatility to saw a range of products and in its use of technology to maximize production.  Both the pony (small log) and main headrig saws make use of 3D scanners to optimize lumber yield from each log.  They are currently increasing production to approximately 120,000,000 board feet of lumber per year.  The main products are green (undried) douglas fir and white fir dimension lumber.

Headrig log deck – the yellow bar is part of the 3D log scanning system that outputs to the screen on the right.

TRL is classed as a SBA (Small Business Administration) sawmill by the Forest Service.  This means that they are eligible to bid on Forest Service SBA set-aside sales (http://www.sba.gov/content/natural-resources-assistance-program).  There are only four SBA sawmills left in California: TRL, Shasta Green, Sierra Forest Products and Sound Stud (currently curtailed).  TRL do not own timberland and source logs, from public and private lands, within a 200 mile radius.  Some logs sourced from the Sierra Nevada are delivered on flat bed trucks with log stakes so that the same truck can then take finished lumber to market.

As part of the UC Woody Biomass Utilization program (http://ucanr.org/sites/WoodyBiomass) I have worked with TRL on a number of projects including deploying new technology at the mill that increases the efficiency of sawing small logs.  Most recently I worked with the mill to help them secure a 2011 Forest Service Woody Biomass Utilization (WBU) Grant.  The grant of $250,000 was one of three awarded to California applicants (http://ucanr.org/blogs/blogcore/postdetail.cfm?postnum=5184) and will help pay towards the engineering required for a biomass fired boiler to run dry kilns with the potential to add electrical generation in the future.  The project will allow TRL to produce kiln-dried lumber, increase the efficient use of sawmill residues and create a new market for woody biomass in the county.

Since 2008 the UC Woody Biomass Utilization program has helped capture almost $5m dollars for California businesses, non-profits and government though the WBU grant program.  This represents a significant investment in helping the forest products industry in California retool for smaller logs and woody biomass from ecological restoration projects.

We have helped many businesses like TRL, non –profits and others with understanding technology, markets and sourcing grants – perhaps you could be next?

The Northern California Prescribed Fire Council provides continuing education opportunities for those using fire in forest management and conservation activities. Although prescribed fire councils are common in the U.S., this is the first such council in California. Council participants include public and private resource managers, researchers, firefighters, fire safe councils, tribes and regulatory agencies. The council hopes that by working together, this diverse group can increase individual members’ expertise in using fire for resource management and can improve fire-related education in the state. The council aims for a better public understanding of the value of prescribed burning in the state’s fire adapted landscapes, for increased safety in the use of prescribed fire, and for increased delivery of fire-related knowledge to land managers throughout the state. Prescribed (Rx) fire is used in a variety of landscapes and contexts in northern California. The versatile nature of prescribed fire is evidenced by its diverse users, which include state and federal land management agencies, timber companies, tribes, non-governmental organizations (including fire safe councils), and private landowners, among others. Prescribed fire is complex in nature and successful implementation requires thorough planning. Major obstacles include:

Join us at the fall meeting of the Northern California Prescribed Fire Council in November in Humboldt.