Bear River FFA with the Champion "Pen of 3" at the Nevada County Fair
Raising livestock at any age requires an array of skills and knowledge in areas ranging from animal health, nutrition and proper handling to resource and business management. It is certainly not a job that can be taken lightly, which is why it is so important to lay a foundation of education for those who are interested in livestock production at an early age. In fact, the future of agriculture and even the way in which society views food production, is highly dependent upon properly educating our youth.

Programs such as 4-H and FFA are excellent training platforms for youth who raise livestock on a small scale. In the last two weeks nearly 800 youth across three different counties exhibited livestock at either the Yuba-Sutter Fair or the Nevada County Fair. Exhibitors ranging from 9-19 years old, have been working tirelessly over the last year to prepare project animals such as cattle, sheep, goats, poultry and swine for competition and market. The process involves more than feeding and grooming animals on a daily basis, which in itself is not always an easy task. Jake Williams of Smartsville 4-H in the show ring at the Yuba-Sutter Fair
“Youth gain a tremendous amount of life skills from raising livestock,” explains Rita Boyes, 4-H Program Representative for the Sutter Yuba 4-H Youth Development Program. “Among these skills, team work, and decision making rise to the top.”

Jake Williams (15) of the Smartsville 4-H Club, recently exhibited and sold his seventh steer at the Yuba-Sutter Fair. As a way to market his steer, Williams, like many other exhibitors, hand-delivers letters to businesses and community members who will potentially support the Junior Livestock Auction. Such tasks develop public speaking and communication skills, and remind young people to keep the primary goal in sight. “The most important part of raising a steer is creating a quality product for the buyer,” says Williams. “It's a lot of fun and I've learned a lot, but it is definitely hard work.” Browns Valley 4-H beef group works together to prepare their market steers for the show
To help meet the needs of students looking to take their knowledge one step further, SFREC is developing an ongoing educational program focused on livestock and natural resources. The 1st Annual Beef and Range Field Day will be held on October 8th, 2014 for high school students in 4-H and FFA. The program will help students make clear connections between beef cattle, range management and water quality and availability; issues commonly dealt with on a working ranch. Stay tuned for more information as we roll out this program!

Youth and adults looking for additional resources, can visit the 4-H Youth Development Program for free curriculum and project sheets pertaining to animal and environmental sciences. Guides for livestock care can be found for several animal species through the UC Davis, Veterinary Medicine Extension program. Adaptation to changing weather and economic conditions is fundamental to farm and ranch survival but this year's drought is pushing variable adaptation strategies to their limit. The international community is closely watching how this dire situation is progressing in California and on June 19th the Canadian Broadcast Company (CBC) visited the Sierra Foothill Research & Extension Center (SFREC) to document how ranchers are adapting to these extreme events and the implications these events have on agriculture and ultimately food production worldwide.   Filming involved capturing interviews of three ranchers to explore their perspectives as well as a tour of SFREC to examine potential adaptation strategies to drought.

Joe Fischer, cattle rancher and President of the Placer County Farm Bureau, told CBC the economic impacts and emotional toll of the drought on ranching families have forced ranchers to rethink their management strategies and find innovative ways to manage the land. “Ranchers tend to be profitable if the land is productive,” Fischer said. “We have to look ahead five to ten years or more and try to be as conservative as possible with our stocking rates. Under these conditions, we have a much smaller margin for error so we have to be more precise than ever with our management strategies.” Almond hulls are high in energy, making them an option for supplementation
Fifth generation rancher, Cari Koopman-Rivers, discussed how her family was recently forced to sell 60% of their cattle due to diminishing water sources on their land. “In addition to grass production, drinking water for the cattle is a major concern,” said Koopman-Rivers. “We are continually working to develop more water systems for both drinking and distributing the cattle into areas they wouldn't normally be willing to graze.”

SFREC Director Jeremy James and Livestock and Natural resource Advisor Glenn Nader used SFERC as an opportunity to demonstrate how intensive grazing management, agricultural by-products and culling strategies could be deployed to mitigate some of the impacts of drought. Many producers with limited feed sources are utilizing agricultural by-products that are available in their area in order to sustain the nutritional requirements of their livestock. Nader, pointed out that almond hulls are high in energy and have limited protein, which allows cows to more efficiently digest hay and can limit the quantity of hay they need to consume. Nader warned that the almond hulls fed must contain a low level of almond shell, in order to avoid problems with rumen digestibility. Rice straw and rice bran are more local agricultural by-products that, under the right conditions, have been utilized as dietary supplements for cattle. From left, ranchers Dan Macon, Carissa Koopman-Rivers and Joe Fischer, speaking candidly with CBC about the impacts of drought
Dan Macon of Flying Mule Farms said that the challenges that arise from this drought and various other climatic events from the past remind ranchers that they need to look further out into the future and make sustainable plans for the long term. After culling 40% of his sheep flock, Macon has found success with contracting with landowners who are looking to reduce forage on their property. He is able to bring his sheep, along with electric fencing into areas that other livestock may not be able to access as easily. “This is not a new norm, it is a continuous norm,” said Macon, responding to how he is adapting to the drought. “No one year is ever the same on any ranch. Adaptation is what we do to sustain ourselves and the land and it is how we will continue to do so regardless of the climate conditions we face in the future.”

To view the proceedings from the January 29th SFREC Drought Workshop, click here.

The annual California Grazing Academy held at UC SFREC and led by Roger Ingram, Nevada/Placer County UCCE Director and Livestock Advisor was once again a widely attended and engaging event. Over a third of an inch of rain cooled off the 24 participants that attended the two-day event that mixed lectures and hand-on activities to explore and demonstrate key principles that drive the ability of producers to be successful grass farmers. Topics included controlled grazing principles, water and mineral cycles, pasture cell design, rest/grazing periods, nutrition and supplementation as well as grazing planning and monitoring. Each participant had the opportunity to visually estimated carrying capacity, install electric fencing, move cows with calves into their designated paddocks, and watch the cattle consume pasture grass over a period of 24 hours.  This annual training has remained hugely popular across California and the West with some participants coming as far as Utah to learn from UCCE and Roger Ingram. We looked forward to another year! 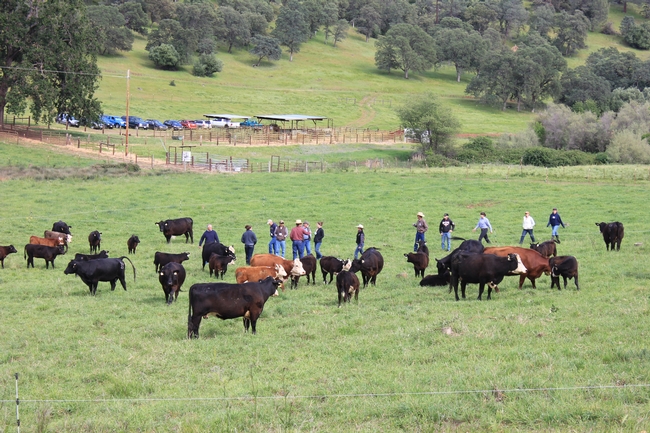 Producers from the Food and Farm Show filmed and interviewed multiple speakers at the Future of Farming and Ranching Forum at the Sierra Foothill Research and Extension Center on February 22nd. The Food and Farm Show highlights local agricultural events, news, and issues. They are part of Touchdown Productions, which films other regional activities like the “Game of the Week” on the local news channels.

These 30-minute videos give the viewer a taste of what the event covered. Click on the following links to watch:

Episode 1 – featuring the keynote speaker Jamie Johansson and the introduction

With media attention like this, SFREC is becoming more visible throughout the region. Collectively, the educational events occurring at all of the Research and Extension Centers help enforce the tangible impacts of UCANR within communities statewide. On February 22nd, community members, local farmers and ranchers, professionals, high school students, non-profit groups, and regional leaders in the ag industry will be gathering in Browns Valley for a forum on The Future of Farming and Ranching in the Sierra Foothills. This event has been in the making since summer when committee members helped lay the foundation for a useful and exciting day about the opportunities and challenges of agriculture in this region. While farmers and ranchers statewide are coping with stressful drought problems, this event will help offer some hope and pride in the great accomplishments of local agriculture.

Speakers will be sharing their personal experiences and knowledge about getting started in agriculture and reaching goals. Topics about resources needed, tools available, and strategies to stay in business will be discussed. High school ag students will present information learned from visits with local farms/ranches and other important areas researched. Multiple non-profit groups will be displaying information and resources as well. There will be a delicious lunch, sourced from local farmers and ranchers (some of which will be present). The cost to attend is $10 per family. Register through our website at http://sfrec.ucanr.edu/

Follow these links for the AGENDA and FLYER. Contact Maddison Easley - mleasley@ucanr.edu or Jeremy James – jjjames@ucanr.edu for more information.