Over the winter, I gave a few presentations that touched on armyworms. In the presentations, I usually had pictures of adult armyworms. Several comments I got after the presentations made me realize that armyworm adult moths sometimes are confused with other moths or butterflies that are seen in abundance at certain times of the year. Most likely, one will not see the armyworm moths flying around unless you are driving around the field at night, when they will be attracted to the car lights. They do not fly during the day.

Below are pictures of the true armyworm and western yellowstriped armyworm, the two species we find in rice. I'm not a great photographer, but the pics lets you see that both are somewhat large, thick moths. The true armyworm moth is straw colored, the western yellowstriped armyworm has a greay and browm pattern on the wings. Click on the pictures to see a high resolution image.

The past four years the true armyworm has been the species that has caused problems in rice. Western yellowstriped armyworms have not been very common. This might change this year. I have been finding high number of wester yellowstriped armyworm moths in the traps very early. We will keep monitoring and see what the season brings. For now, enjoy the pictures. 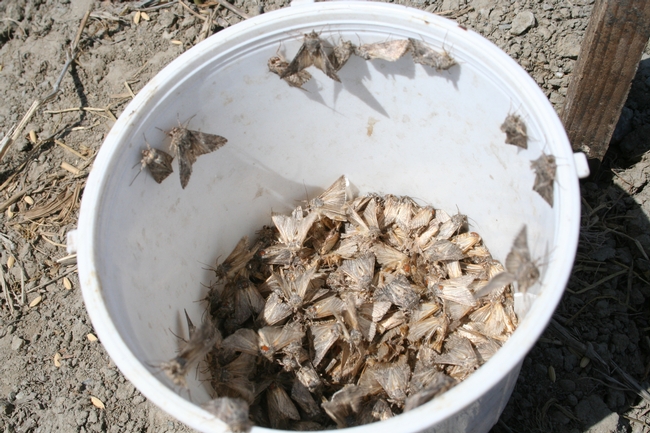 Today I visited two fields with large moth numbers (Hwy 45 and White Rd, and Hwy 45 at Knights Landing). On the White Rd field, where the traps caught about 80 armyworm moths per night last week, I found at least one worm in all stops I made (about 10). The worms were small. I did not see any injury. On the Knights Landing field, I found worms in half the stops. These were small worms as well, and I did not see any injury. I found that the best way to find the worms was to open the canopy, shake the plants vigorously over the water for about 5 seconds, and then look for worms floating in the water. I would not recommend a treatment in these fields, since I saw no injury. As these worms grow bigger, they may start feeding on panicles. Keep a close eye, and if you start noticing the typical armyworm panicle injury (broken branches) and the worms are still there, a treatment may be needed. This year, with the help of Dow AgroSciences, I will increase the number of armyworm traps that I have been monitoring. The idea is to give growers and PCAs more localized information so that they can have a better idea of what's going on near them, and when to increase their monitoring efforts. Weekly trapping numbers will be posted on our website, UC Rice Online, http://rice.ucanr.edu/armyworm_traps/

I will be sending a weekly “armyworm alert” email once the trap numbers are updated on the website. The email will go out to those who are subscribed to one of our electronic newsletters (Rice Briefs, Rice Leaf, or Field Notes). If you receive the armyworm email but are not interested, just click on the unsubscribe link at the bottom of the email. For those who do not receive our newsletters electronically, you can subscribe to the alert email in the armyworm website: http://rice.ucanr.edu/armyworm_traps/ 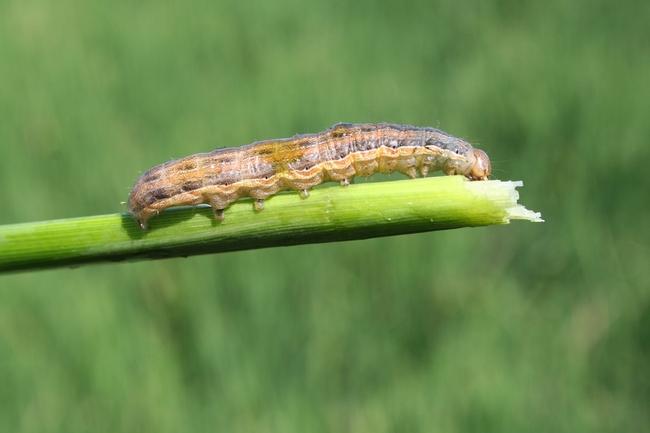 I was evaluating armyworm injury in plots and noticed there was quite a bit of panicle blanking not caused by armyworms. When armyworms injury panicles, they feed on the rachis of panicle branches, causing those branches to dry out. Sometimes the kernels in those branches may be partially filled, but since they stop receiving nutrients and water due to the biting injury of the armyworm, they dry and turn straw colored. Most of the time, the branches brake off at the point of injury and can be seen hanging on the panicle. If you look closely at where the rachis is broken, you can see the biting mark of the armyworm.

The other blanking I was noticing was a little different. It was mostly on the panicles under the canopy, although some could be seen in the panicles on top. Blanked branches turned white, almost as if bleached, and kind of translucent. This  might be because these panicles were young. Most likely they will dry out and also turn straw color. None of these injured branches were hanging on the panicle and no biting marks could be noticed.  I suspect this blanking was caused by high temperatures. Temperatures above 104 F during flowering dry the germinating pollen tube before fertilization and cause blanking. It seemed that some areas in the field were more affected than others.

Going back to armyworms, I found very little injury in my Butte County trial. Two trials in Colusa had no injury. The number of armyworm moths caught in the traps as of 8/24 have come down again. I suspect we won't see the numbers climb up again, therefore the risk of armyworm injury now is very low.

Click on the images below to see a close up of armyworm injury (left) and high temperature blanking (right).

I have received reports of significant defoliation due to armyworms from several areas: Glenn, Colusa, Butte and Yolo counties. In most areas the defoliation is severe but the area affected within fields still small.

I inspected a field in Glenn County. The defoliation was severe along levees and in near borders, and worms were about 5th instar. Population was high, similar to 2015. Severe defoliation along border of field. The degree day model predicted 5th instar armyworms will start showing up June 22. The heat from last week sped things up, but the model was really close.

Remember that worms feed the most during 5th and 6th instars, and it will take them 10 days to complete their cycle after reaching the 5th instar. This means that there is plenty of time for them to cause more injury and move to other areas of the field. Keep a close eye and consider a treatment if the worms are still present. Do not wait until worms get bigger, they are harder to kill with any insecticide. It's starting to look like 2015.