I looked at the USDA planting progress for rice in 2018. What the data show is that 50% of the crop was planted by May 14. That is 5 days earlier than last year and a couple days later than average.  The delay was due to significant rains in early and mid-April which delayed groundwork. As I write (in the first full week of June) there are still some fields being planted – though not many.  Having the benefit of driving around the valley for various research projects I am involved with, it seems that the west side of the valley was able to plant much earlier than the east side of the valley. So the east side of the valley may be further behind than the statewide data suggest. Last year, the late planting date was combined with a very warm summer; which, I feel, resulted in lower yields than many growers were used to.  In general, there is a slight yield decline with delays in planting date. However, there are many examples in the data where we have had high statewide yields when 50% of the acreage has been planted by May 15. For example, in 2016 the 50% planting progress date was May 15 and that year was the second highest statewide yield average on record (88.4 sacks/ac). So, on a statewide basis, I think this year is off to a good start, although I do have some concerns about the late planting dates I have been seeing on the east side. I think the outcome in terms of yields will depend on summer temperatures and if we have a favorable fall for a timely harvest. I was evaluating armyworm injury in plots and noticed there was quite a bit of panicle blanking not caused by armyworms. When armyworms injury panicles, they feed on the rachis of panicle branches, causing those branches to dry out. Sometimes the kernels in those branches may be partially filled, but since they stop receiving nutrients and water due to the biting injury of the armyworm, they dry and turn straw colored. Most of the time, the branches brake off at the point of injury and can be seen hanging on the panicle. If you look closely at where the rachis is broken, you can see the biting mark of the armyworm.

The other blanking I was noticing was a little different. It was mostly on the panicles under the canopy, although some could be seen in the panicles on top. Blanked branches turned white, almost as if bleached, and kind of translucent. This  might be because these panicles were young. Most likely they will dry out and also turn straw color. None of these injured branches were hanging on the panicle and no biting marks could be noticed.  I suspect this blanking was caused by high temperatures. Temperatures above 104 F during flowering dry the germinating pollen tube before fertilization and cause blanking. It seemed that some areas in the field were more affected than others.

Going back to armyworms, I found very little injury in my Butte County trial. Two trials in Colusa had no injury. The number of armyworm moths caught in the traps as of 8/24 have come down again. I suspect we won't see the numbers climb up again, therefore the risk of armyworm injury now is very low.

Click on the images below to see a close up of armyworm injury (left) and high temperature blanking (right).

Every year we see some off-types in our public varieties that have a genetic mutation we call elongated upper internode. This mutation causes the internode below the panicle to elongate, resulting in panicles that stick above the canopy. Some have confused this abnormality with weedy rice.

It seems that the occurrence of this abnormality may be related to weather - some years we see it more often than others. In any case, the frequency with which it occurs is so low that it does not affect yield. 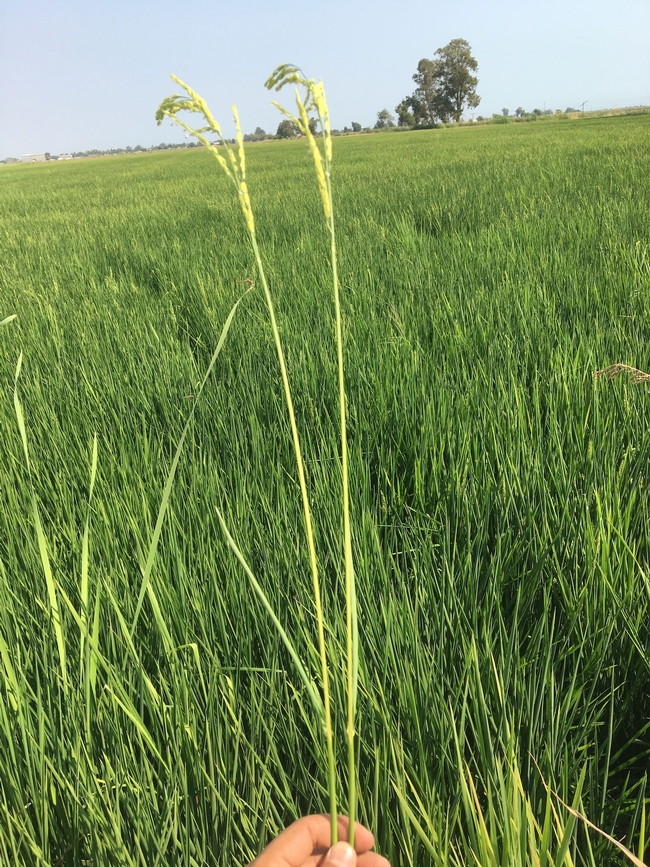 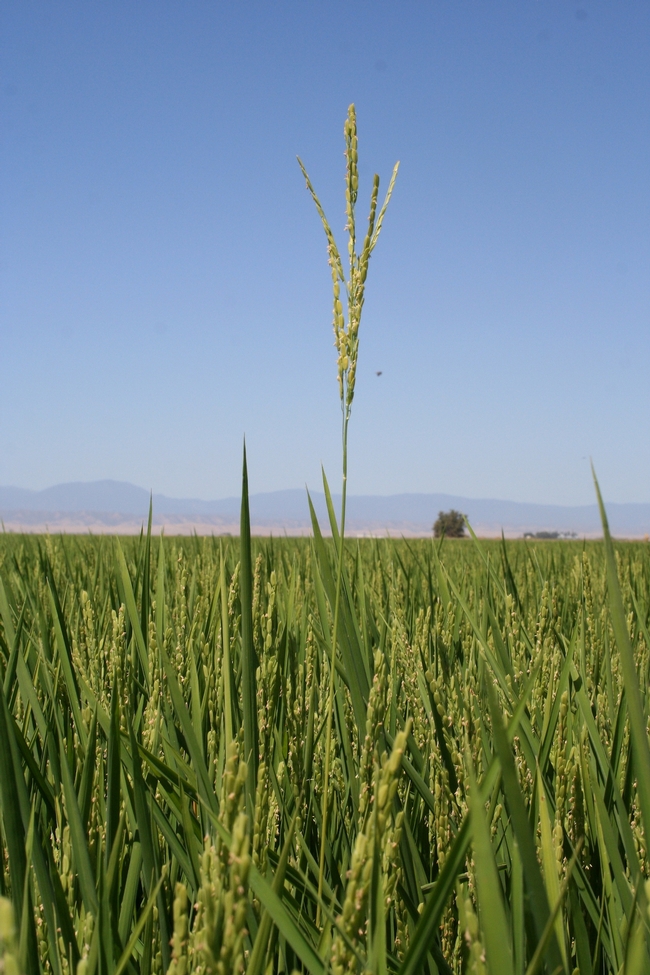 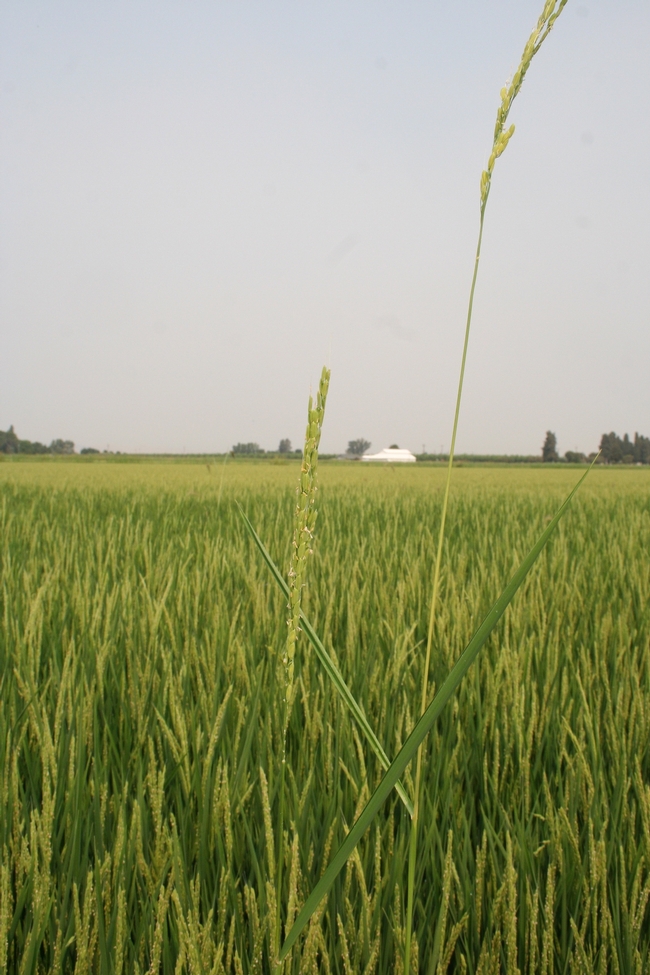 We all know it has been a warm year. In fact, in 2014 the average daily temperature for May and June was 72.2 degrees (CIMIS-Colusa). This is 2.4 degrees warmer than the average of the last 20 years and 3.3 degrees warmer than the average of the last 5 years. What does this mean for crop development? In general, rice develops at a faster rate with increasing temperatures. In the statewide variety trials (funded by the Rice Research Board) we have seen that the crop is progressing at a faster rate than previous years. This year the crop reached PI about 3 to 7 days earlier than in previous years. The difference between this years and others is especially evident in the early plantings (early May). Based on past experience, we expect the crop to reach heading and harvest earlier as well - assuming on big weather changes. Based on this, growers should plan practices accordingly. Also, be sure to monitor the crop rather than just relying on days after sowing.

A few weeks ago I was on the phone with a grower worried that he had put too much nitrogen on his rice for the cool year we were having. Then, the weather turned and got really hot. So, are we in a cool or warm year? What is the trend so far? It is hard to come with an answer just by comparing the daily average temperatures for this year to the historical average temperatures. A way to discern what is going on is to look at the amount of heat units or degree days (DD) accumulate so far. Using the Colusa CIMIS station and a lower developmental threshold of 55oF, I calculated how many DD we have accumulated since May 1st. Looks like 2013 is on the warmer side. The year 2011 was a characteristically mild year, while 2012 was closer to the historical average.

When looking at May and June individually, you realize that most of the extra DD were accumulated in June. May was closer to 2012 and to the historical average. What are some of the implications of this? Early planted fields are already pass PI. Fields that have not reached PI yet should be evaluated for nitrogen topdress need. Warmer conditions promote growth and nitrogen use, and you don't want your crop to run out of fuel before the end of the race.

We've seen that during mild years blast can become a problem in some areas. Warmer temperatures seem to discourage explosions of the disease. If you are considering a treatment, scout your fields to identify infections and talk to your neighbors to see what is happening in the area.