We hope you can join us for our field day!  Agenda and directions are below.  Contact Sarah Light with questions: selight@ucanr.edu ~ 530-822-7515.

After a relatively dry start to the rainfall season from October through early November, rainfall in California since November has been above average. About halfway through the rainy season, year-to-date precipitation totals are approximately 20-30% greater than the 10-year average in the small grain growing regions of California (Figure 1).

Growing degree days (GDD: 86F max; 45F min) for common wheat and other small grains have been accumulating more rapidly than the 10-year average since the middle of November (Figure 2), which has been primarily a function of warmer than average night-time temperatures (Figure 3). 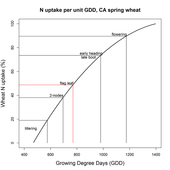 After almost 6 weeks without a substantial rainstorm, there is finally some precipitation starting to appear in the 10-day forecast for the Sacramento Valley. The lack of rain thus far has made it difficult to proceed with N fertilizer topdress applications in non-irrigated wheat fields this season. In addition, the warmer than normal temperatures have increased the rate of crop development such that many fall planted wheat crops are further along than would normally be the case at this time of year. Figures 1 and 2 below represent the cumulative rainfall since 10/1/2017 and the cumulative growing degree days (GDD) for wheat since 11/21/17, when we planted our experimental trials in Davis (each is compared to a 10-year...

After a dry beginning to the season, wheat growers might be trying to decide how to proceed with their nitrogen fertility program. If not irrigated, most wheat planted in the Sacramento Valley during November will likely have been stunted by the relatively dry conditions during the second half of November and throughout December (see Fig. 1, below). Some of the crops out there may need to be replanted entirely. If you're trying to work out how your stand is doing, consider some population sampling.

To get a rough estimate of your field's population, take several plant counts from random locations in the field. Lay a yard stick parallel to a row and count how many plants are still present in that row. Do this several times...

Recent UCCE research has illustrated the value of in-season applications of nitrogen (N) fertilizer, particularly applications made at the early vegetative growth stages. This is typically the stage of growth when N demand from the crop is increasing rapidly, the soil is beginning to warm up, and microbial metabolism and associated mineralization/transformations of the various forms of N are increasing. Over a wide range of California conditions and across multiple seasons, applications of N fertilizer at this stage of growth have been shown to