I was just speaking with a colleague doing some work this weekend up at MacDoel in northern California and he reported really low temperatures last night.  Chill is certainly starting to accumulate at the strawberry nurseries, and good thing too since this winter might be a bit warmer than usual.  In other words, it's looking good up there.

Remember that chill can be defined as temperatures below 45 degrees F and above 18 degrees F.

The link below is to a paper written by Doug Walsh, Frank Zalom, Doug Shaw and my predecessor Norman Welch.  It succinctly makes the point that a warm fall following transplanting decreases plant vigor, encourages precocious bloom and can predispose strawberry plants to infestation by twospotted spider mites.  Rain can reduce overwintering mite populations, but still warm fall temperatures will decrease plant vigor.

With the understanding that this fall and winter has more than even odds of being an "El Niño" year (http://www.elnino.noaa.gov/), which could result in warmer temperatures and more precipitation, growers and agricultural people might want to be thinking about being a little bit longer than customary on cold conditioning of the day neutrals up here on the Central Coast. 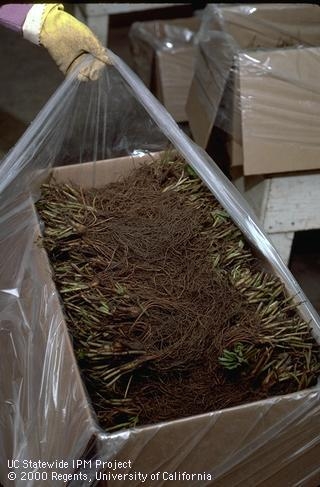 The cold weather we have been experiencing over the past few days has prompted a lot of talk and even articles in the popular press over what the effect of this cold would be to local berry growers.  Beyond the damage that very cold temperatures could cause tender plant parts such as flowers and emerging vegetative parts (of which we fortunately don’t have very many right now), the question worth exploring is what benefit this weather could be bringing to our berry crops.

Many of our cultivated fruiting plants originate from temperate regions, including many berry species and tree fruits, and as such go dormant in response to oncoming cold weather in the autumn.  This adaptation of dormancy protects the plant buds from injury when temperatures fall below freezing and the buds stay this way until enough cold has been accumulated over time.

This accumulation of cold over time, known as chilling requirement and measured in hours as chill units, is the minimum amount of cold after which many fruit trees, caneberries and strawberries need to be exposed to in order to grow properly in the following spring.  The total number of hours of chill needed to establish proper flowering and vegetative growth vary substantially for plant types and even between varieties of the same plant species.

If plants requiring a certain amount of chill hours do not receive it, they may end up blooming or leafing out late in the spring or in an spread out, uneven fashion. Additionally, they may subsequently experience reduced fruit production and quality.

Another complication of calculating chill units in California, as compared to much colder regions of the country, for example Wisconsin where temperatures can be below freezing for weeks at a time (go Badgers!), is that our region tends to have a cycling of warm and cold weather throughout the winter.  How then do we as agriculturalists in California calculate chill accumulation in this back and forth between cold and warm?

To calculate chill hours, there are three common models all based on the principle that plants accumulate chill between 45 degrees F and freezing (32 degrees F and not below).   One model ignores the below freezing threshold and simply calculates total number of hours under 45 degrees F, another calculates number of hours between 32 degrees and 45 degrees, and another, called the Utah model, is bounded by 34 degrees and 45 degrees but also accounts for negative chill accumulation, being the understanding that temperatures above 61 degrees detract from chill hours already accumulated.  It is worth pointing out that in the Utah model, temperatures under 34 degrees do not accumulate chill, nor do they detract from it.

Yet, the fluctuating temperatures of California still are a challenge to some degree for these models, and the University of California is engaged in research to get a better handle on these conditions, and is has been testing a “Dynamic Chill Model” and a “Chill Portion Model”.   Both of these are beyond the scope of this blog, but Central Coast agriculturalists seeking to further their understanding about chill and how to manage it, will find an excellent resource at : 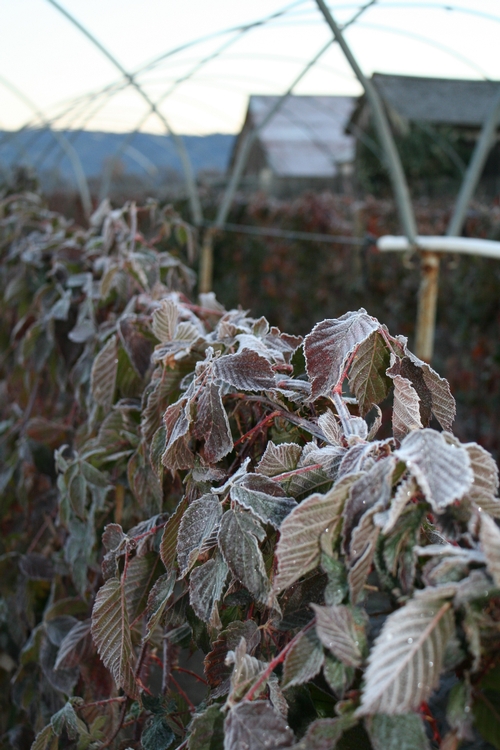 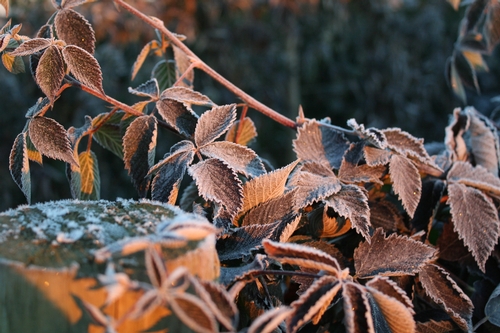 Blackberry leaves covered in frost - plus or minus benefit to the plant? 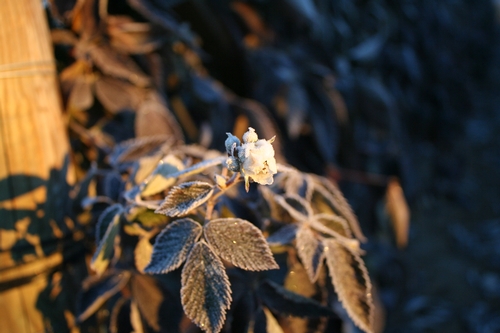 This frost covered blackberry flower will unfortunately not make it to fruiting.
Tags: blackberries (11), chill (11), cold conditioning (10), frost (2), raspberries (3), strawberries (14)
Comments: 0
A few notes to growers regarding the transplanting of strawberries for the 2010-2011 season.
Published on: October 30, 2010

One of the first posts to this blog regarded the importance of chill, both field and supplemental, to the day neutral (ie Albion, San Andreas, Portola, Monterey among others) strawberry varieties.  Right now, field chill in MacDoel is in the area of 600 hours, which is plenty, even in the light of the very warm stretch of weather that took place in September.  Still, be reminded that this abundance of field chill should not be considered to be a replacement for supplemental chill taking place in the cooler after the transplant has been harvested.

However, this year because of the delay in transplant harvest growers really should be striving to strike a balance between getting adequate supplemental chill to obtain good vigor and planting sufficiently early to get sufficient plant growth here in the fall.  To accommodate this idea, every one of the day neutral varieties listed above can be well established with supplemental chill of 7 to 10 days, but no less.  More days of chill, up to 18 days, are of course in the printed recommendations, but this year a large delay in planting may not result in acceptable plant growth and establishment.

If one follows the suggestion given above, supplemental chill will end up being on the low side, and subsequently growers must be more vigilant than usual in planting practices.  Transplants must not be allowed to dry out in the field during planting, transplants should be properly placed the planting hole (no “J” rooting, and only portion of the crown above the soil line) and irrigation for establishment should keep the beds at field capacity for a few weeks.