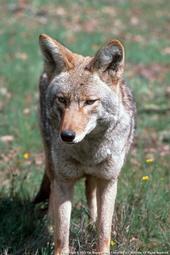 Some coyotes have adapted to urban environments, creating a need for outreach and managing coyote-human conflicts.

Wildlife and people have been in the news lately. Perhaps you've heard of coyotes wandering in urban neighborhoods. You might have also read why you shouldn't feed wildlife. Did you know they are connected? It's a problem when people feed coyotes either intentionally or unintentionally by leaving garbage uncovered or pet food outdoors. Readily available food may encourage coyotes to lose their natural fear of humans. These interactions will be discussed during a symposium on urban coyotes at the 27th Vertebrate Pest Conference, March...

Deer mice are the most abundant and widely distributed mammals in North America.

Two people in California were recently diagnosed with hantavirus infection, and one has died. Both of them spent time at Curry Village in Yosemite National Park, according to the California Department of Public Health. These new cases of hantavirus are a reminder to be aware of the threat and to take precautions to prevent infection.