You don't have to dig too deep into the scientific literature and popular media to find perspectives on threats posed to biodiversity in California and around the globe. Two UC Davis scientists in the Department of Wildlife, Fish and Conservation Biology have published fresh insights into endangered species in recent months.

Peter Moyle, professor in the Department of Wildlife, Fish and Conservation Biology, is a renowned expert on California's native fish. He used the occasion of the 40th anniversary of the passage of the federal...

The study, published in the September issue of Ecology and Society, examined a combination of 15 social and ecological variables — from tourism and per capita gross domestic product to water stress and political stability. Then researchers analyzed their correlations with invasive and endangered birds and mammals, which are two indicators of... 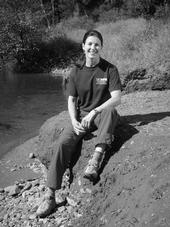 Cooperative Extension Specialist Lisa Thompson conducts research and outreach programs to help anadromous and inland fish. As director of the Center for Aquatic Biology and Aquaculture, she oversees a facility at UC Davis that gives scientists extraordinary capabilities to study some of California’s most threatened and endangered fish species. (Photo by Stephanie Locher)

A pair of leading UC Davis experts will provide a rare glimpse into efforts to protect California biodiversity at a public lecture May 10, 4–6 p.m., in the UC Davis Conference Center.

Lisa Thompson, a UC Cooperative Extension specialist and director of the Center for Aquatic Biology and Aquaculture, will discuss how the campus’ specialized aquatic laboratory plays a crucial role in research into endangered and threatened fish such as Delta smelt and green sturgeon. Ted Grosholz, an environmental sciences and policy professor and UC Cooperative Extension specialist, will share his insights into the...