Immigration projected to drive growth in U.S. working-age population through at least 2035
Published on: April 17, 2017 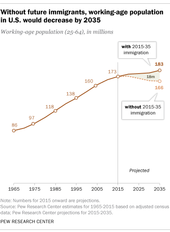 For most of the past half-century, adults in the U.S. Baby Boom generation – those born after World War II and before 1965 – have been the main driver of the nation's expanding workforce. But as this large generation heads into retirement, the increase in the potential labor force will slow markedly, and immigrants will play the primary role in the future growth of the working-age population (though they will remain a minority of it).

Hispanics account for the majority of U.S. population growth, with nearly 25 percent of all infants now being born to Hispanics, according to a new report from the University of New Hampshire's Carsey School of Public Policy.

With Hispanics driving population growth, the Carsey School researchers highlight that Hispanic infants are nearly 2.8 times more likely than non-Hispanics to be born into poverty.

“Today, over 5.4 million U.S. Latino children live in poverty, a number that exceeds the...

The U.S. Hispanic population has been a key driver of the country's population growth since at least 2000. But the group's growth has slowed in recent years, and that trend continued in 2014, as evidenced by new figures released early today by the U.S. Census Bureau.


Tags: demographic (10), hispanics (15), population growth (8)
Comments: 0
The diverse households of low-income Hispanic children living in the US
Published on: April 28, 2015

"The Complex and Varied Households of Low-Income Hispanic Children," a study published by Child Trends and the National Research Center on Hispanic Children & Families, showcases the challenges, advantages and unique characteristics of diverse low-income Hispanic homes in the U.S., and its effect on children.

California's population will continue to grow over the next 45 years, but very slowly, a new projectionby the state's demographers reveals, with Latinos and Asian-Americans providing virtually all growth and the white population shrinking dramatically.

The Department of Finance's demographic unit projects that the state's population, 37.3 million in the 2010 census and nearly 39 million now, will top 51 million by 2060, 38 percent higher than the census number.

That would continue the state's relatively slow growth of the past two decades, under 1 percent a year.

The demographers project that the state's Latino population will grow...