Ambrosia beetles, which are a large group of several thousand species worldwide, belong to the bark beetles. All species are characterized by the ability to cultivate fungi. Invasive Shot Hole Borers that attack avocado and a range of native and landscape trees in California and the Laurel Wilt Disease that hammers avocado in Florida are ambrosia beetles. These beetles cultivate fungi in living trees and over time, the fungus is what kills the tree.

Beetles share the work of cultivating their fungal gardens: some clean the tunnel systems that are being eaten into the wood; others clear the dirt from the nest and clean their fellow workers -- always with the aim of optimizing the symbiosis of beetle and fungus.

It's been long known that alcohol is produced by weakened trees and that these trees are recognized and colonized by the beetles. Traps baited with alcohol are used to catch  the insects when they fly. Alcohol is very attractive to the beetles in large part because the fungi they feed on performs best in an alcohol-rich environment. Alcohol is normally used as a preservative to impede other fungi, such as molds from growing, and this is the case for the fungi associated with these beetles. They prefer to grow in an environment where other fungi don't grow.

Here's an interesting article showing how this preference by disease-causing fungi allows them to thrive in a normally harsh environment. Maybe it can be exploited. 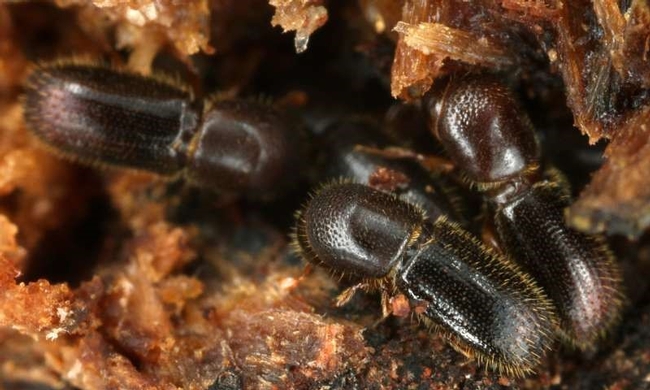 Next up on Ag Experts Talking is Laurel Wilt Disease which is causing major damage in the native tree populations of the south east United States and the avocado groves in particular.  Learn what is being done there and what the potential threat is to California avocados.

What Are the UC Ag Experts Talking About?

A series of 1 hour webinars, designed for growers and Pest Control Advisors, will highlight various pest management and horticultural topics for citrus and avocados.  During each session, a UC Expert on the subject will make a presentation and entertain write-in questions via chat during and/or after the presentation. As we develop this program, we may expand to other crops.

Topics: pests and diseases of citrus, avocado and other crops

What are the topics and how do I register?

Management of Glyphosate-Resistant Weeds in Orchard Crops (April 24, 2019 from 3-4pm)

Dr. Brad Hanson, cooperative extension specialist, will discuss what is herbicide resistance, current state of resistant weeds in CA permanent crops, identification and lifecycle of key glyphosate-resistant weeds, selection pressure for resistant biotypes and species, herbicide modes of action, and examples of herbicide programs for orchard crops. One DPR CE unit (other) and one CCA CE unit (IPM) are pending. 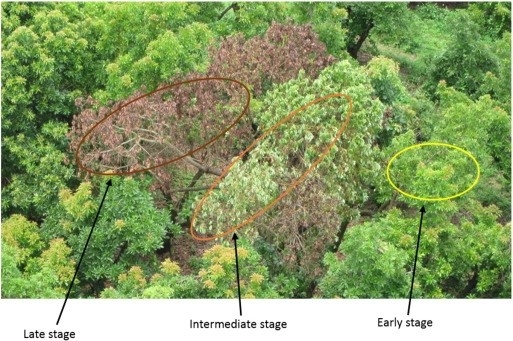 Sugary exudate on trunks or branches may indicate a PSHB attcak.

Through DNA sequencing, UCR entomologist have determined that we have two separate invasions of the Polyphagous Shot Hole Borer (PSHB) here in southern California attacking avocados. One invasion in San Diego County and the second in Los Angeles County. UCR entomologist, Richard Stouthamer states the two are different species genetically, but morphologically they are indistinguishable, luckily they both respond to the same lure. They do however carry different fungal symbionts with them.

The species that has invaded San Diego, is now known as the Kuroshio shot hole borer, and is originally found only in two places in the presumed native range: highlands of Taiwan and in Okinawa. The species of beetle that has invaded Los Angeles County will now be known solely as the Polyphagous, its native range is in Vietnam, South China, North Thailand, low lands of Taiwan and Okinawa, this species has also invaded Israel and South Africa.

These Shot Hole Bores are Ambrosia beetles, a specialized group belonging to the family Scolytidae. The shot hole borer was first found in Whittier Narrows in Los Angeles County in 2003. From 2003-2010 the beetle was found on a few ornamental trees, then in 2010 it was the presumptive cause of the death of a large number of box elder street trees in Long Beach. In 2012 the beetle was collected from a backyard avocado tree in South Gate, and from several tree species at local botanical gardens, since then it has been causing havoc in the avocado industry. It now appears to be established in Los Angeles, Orange, San Bernardino and Riverside Counties, and is expanding its range in San Diego County. A single beetle was caught in Santa Cruz County in 2014 and has now been found less than 2 miles from Ventura County line.

The beetle is dark brown to black and tiny, with females between 0.07 and 0.1 inches long, and males even smaller, usually about 0.05 inches long. They differ from the bark beetles in this family in several ways. While bark beetles burrow in the phloem layer or at the juncture of the bark and sapwood, ambrosia beetles bore through the bark and into the sapwood. The shot hole bores are highly specialized and feed on fungi that they cultivate on the walls of the tunnels. In the case of the shot hole bores, they transport the pathogenic fungus, Fusarium euwallacea and both the adults and larvae feed on the fungus. Shot hole borers attacks hundreds of tree species, but it can only successfully lay its eggs and/or grow the fungi in certain hosts. These include: Avocado, Box elder, California sycamore, Coast live oak, White alder, Japanese maple, and Red willow. Visit http://eskalenlab.ucr.edu/ for the full list. Infection with the fungus can cause a dry or wet and oily dark stain surrounding the entry holes, discolored wood, leaf discoloration and wilting, and dieback of entire branches. In box elders and avocados, a while crusty ring of sugar, also called a “sugar volcano” can be produced. Frass (wood dust left behind from boring) may be produced, but because this can quickly dissolve if it rains it can be missed sometimes. If the barked is scraped away, dark dead tissue may be found around the galleries.

Currently there is no cure for the fungus once the tree has become infected. Chipping and solarizing/tarping infested wood can help to limit the spread of the beetle/fungus. Wood should be chipped to pieces smaller than 1". Don't forget to sterilize pruning tools between uses to avoid spreading the fungus.

If you suspect you may have the shot hole bore in your grove please feel free to contact your local CE Farm Advisor/Specialist.