Mature Compost Does NOT Kill Phytophthora
Published on: January 18, 2016

A recent article in California Agriculture highlights something that we have found in raw organic materials that have been used in mulches for controlling Avocado Root Rot – Phytophthora cinnamomi.  The most active stage of a material in the process of composting, is the initial one where all the bacteria and fungi are fighting to consume the easily decomposable sugars and light fraction organics.  That's when the material heats up and various gases, such as ethylene, ammonia and others are released.  This is the most competitive time in decomposition and Phytophthora just can't compete.  In fact, it becomes a food source for the antagonistic fungi, since its cell wall is made of cellulose the material that many leaves are made of.  In releasing exudates to decompose cellulose, the Phytophthora is decomposed, as well.  As the cellulose is decomposed and disappears more resistant materials remain.  A mature compost, is therefore a much more stable material than a raw one.  It still has nutritional benefits, as well as physical effects on soil when it is incorporated, but has a lesser impact on Phytophthora.

Compost is used as a soil amendment, largely because it is relatively stable biologically and has nutritional/physical effects. Incorporating raw organic matter into the soil and then planting has its restrictions and should be done cautiously.   But as a mulch (material applied to the soil surface) there are fewer problems, as long as some common sense is used.  Like don't pile it up against plant stems which keeps moisture and conditions for disease around the plant crown.  And there are several other qualifiers, such as don't apply it so thickly that the soil never dries out and becomes a problem in walking across it.

So, read this interesting story of what happens to Phytophthora when introduced into a mature compost:

This is also a great web site to read about other UC related agriculture and natural resource research.  Sign up. 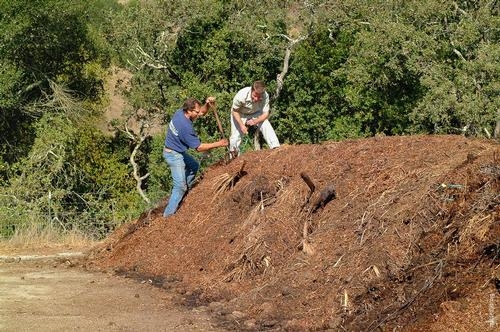