Psyllids as a pest group have very few specific predators that can be used in biocontrol.  Instead there can be some control by generalist predators, like minute pirate bugs, spiders, lady bug beetles and predatory thrips. Predation, though, does not completely remove the pest, in this case Asian Citrus Psyllid.  Leaving a few infected ACP to spread the HLB bacteria to trees, though, is a major problem because tree infection only requires a small amount of bacteria to eventually cause tree death.

Chemical control is being used in most situations for major control of the insect, and thereby the spread of any insects infected with the bacteria causing Huanglongbing. It turns out that pesticides that supplement more traditional modes of action can also be used. Kaolin is a white nonabrasive fine-grained mineral that when is sprayed on the plants forming a particle film. This compound is well known to suppress several species of insects in different crops due to host selection interference.

A recent study in Brazil investigated the influence of two kaolin formulations on the landing and feeding behavior of ACP.  Both kaolin formulations had a repellent effect and interfered with the feeding behavior of ACP on citrus. Kaolin reduced the number of psyllids and protected the citrus plants from insect feeding.  Frequent spray applications on the border of the farm could be an important strategy to reduce HLB spread.  Spraying to control ACP spread on orchard border trees is often critical because this is where infestations often start. Kaolin won't be a replacement for other pesticide sprays, but could be an added tool for controlling the pest and spread of the disease - another integrated management tool. 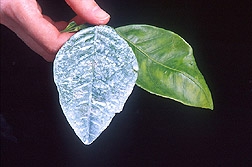 Water moves in a wetting front. When irrigation water hits the soil it moves down with the pull of gravity and to the side according to the pull of soil particles (more lateral with more clay). Soil is a jumble of different sized soil particles, from clay to silt to sand sizes and then often intermixed with stones of different sizes from gravels to boulder. The different textures determine how water moves. It moves fastest through coarse textures and slowest through finer ones – the clays, the ones with the smallest pores. But soils are a jumble of particle sizes and pores.

So an initial application of water will carry the salts from these large pores and if the irrigator were to stop in mid-application, it allows time for the salts to move out of the small pores into the larger ones. Then when the irrigation recommences, it will carry more of the salts out of the wetted area – the root zone. This technique is called “bumping” where an irrigation is stopped and then restarted in order to improve not only leaching, but also reduce runoff.

Watch this U-Tube video on how water moves through soil, thanks to the work at Walla Walla Community College.

Thank you Walla Walla Community College for the video