The People Who Can Help After Disasters

The county committee nomination period began on June 14, 2019. Nomination forms must be postmarked or received in the Santa Barbara/ Ventura County FSA office by close of business on Aug. 1, 2019.

For election purposes, counties are divided into local administrative areas (LAA). Each LAA nominates and elects one producer to serve a three-year term on the FSA county committee.

Each year, an election is held in an LAA where a committee member's three-year term is expiring. For 2019, an election will be held in LAA 3, which includes: The Eastern Area of Santa Barbara County from Santa Maria to the County line.

“Farmers and ranchers in LAA 3 are urged to participate in this year's county committee elections by nominating candidates by the Aug. 1, 2019, deadline,” said Estrada. “County committees are unique to FSA and allow producers to have a voice on federal farm program implementation at the local level.”

Farmers and ranchers may nominate themselves or others. Organizations representing minorities and women also may nominate candidates. To become a candidate, an eligible individual must sign an FSA-669A nomination form. The form and other information about FSA county committee elections is available at fsa.usda.gov/elections. Nomination forms must be postmarked or received in the local USDA service center by close of business on Aug. 1, 2019.

Nationwide, there are approximately 7,800 farmers and ranchers serving on FSA county committees. These individuals make decisions on disaster and conservation programs, emergency programs, commodity price support loan programs and other agricultural issues. Committees consist of three to 11 members who are elected by eligible producers.

Persons with disabilities who require accommodations to attend or participate in this meeting should contact Brenda F. Estrada at 805 434-0396, ext. 2, 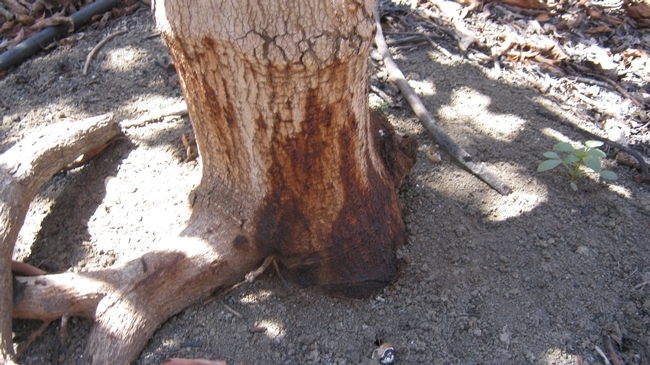 A third day for applying for USDA - Farm Service Agency/Natural Resources Conservation Service Disaster Relief has been added.  Applications can also be made at the FSA offices listed at the end of this message, but the times and venues listed here are for the convenience of fire-affected producers in these two counties.

The USDA's Farm Service Agency and Natural Resources Conservation Service will have workshops to aid agricultural producers; including cattle, tree, nursery, vegetable, and berry farmers in filing for federal assistance programs.  Appointments can be arranged now for filing applications during these workshops.

The California Avocado Commission and University of California Cooperative Extension (UCCE) are coordinating with the USDA's Farm Service Agency (FSA) and the Natural Resources Conservation Service (NRCS) the availability of field appointments for growers who have been impacted by the Thomas Fire. Personnel from both FSA and NRCS will be available to assist growers with the necessary paperwork to apply for federal assistance.

The three days of appointments are available (information below). To schedule an appointment for one of the following three days, please call (805) 645-1434.

Federal relief personnel will be available to assist growers with the paperwork, and growers are asked to provide the following information:

In addition, it's important that California avocado industry members who have been impacted by the recent wildfires and/or Santa Ana winds contact their crop insurance agent within 72 hours of the event to determine possible applicable coverage. Both fire and wind events may be included in certain crop insurance coverage, but agents must be notified within 72 hours.

Below, again, is a list of potential FSA programs that may provide disaster assistance to those avocado growers affected by the wildfires:

Remember, if you are an impacted grower/cattle producer you are asked to contact both FSA and your county agricultural commissioner's office as follows: 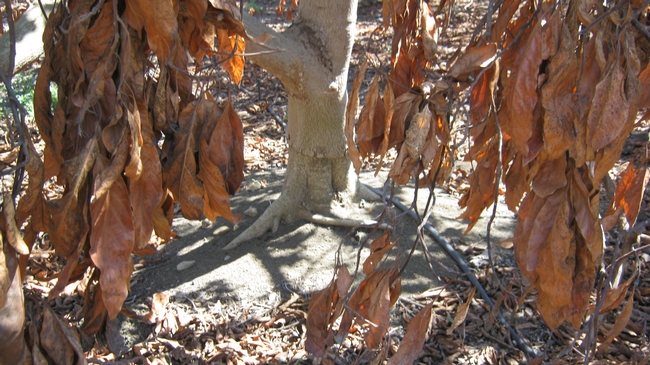 After the fires, the question has come up of whether an orchard should be replanted or topworked in the field, possibly to a new variety.  This has been an issue in the past and was addressed in a little study nearly 20 years ago. The study still bears relevance today and applies to both avocado and citrus.  The availability of avocado trees for replanting is in serious short supply, so replanting may not be an option at this point.

There are many changes going on in the citrus industry and one opportunity is the conversion of an orchard to another variety of citrus. If this is a consideration, then the question becomes one of whether the orchard should be topworked or replanted with new nursery trees. If the trees are healthy and under 20 years of age (it is possible to topwork older trees) and the new scion is compatible with the interstock or rootstock, then topworking can come into production sooner than a new replant. If the planting density needs to be changed or serious soil preparation or a new irrigation system needs to be installed, then replanting might be the preferred choice.

The chance to convert is also dependent on the availability of new trees and budwood. New varieties can often be in short supply. It's best to make sure that for either option that the material is there. For topworking, T-budding is more conservative of material than stick grafting. If topworking is chosen, then it must be decided whether to graft the scaffold branches or the stump. Stump grafting makes for a lower tree, but scaffold grafting reduces the risk of losing the topworked tree from damage to the graft from birds, pests, wind or frost.

It is often assumed that topworking is cheaper than replanting, but as the following example shows, it probably is not. In Santa Paula, ‘Olinda' Valencias on ‘Carrizo' rootstock were converted to scions ‘Allen' Eureka lemon, or ‘Powell' late navel. In 1998 and 2000, the ‘Olinda's were interplanted with either ‘Allen' on ‘Macrophylla' or late navel ‘Powell' or ‘Chislett' (on either ‘Carrizo or ‘C-35' rootstocks). The ‘Olinda's were topworked in 2002 and 2003 to one of the new scions. In a few cases, ‘Allen' was stump grafted, but most trees were scaffold grafted.

Several steps are required for topworking that will ensure success. These are listed below:

• Get a reputable person to do the work.

• Time of year is critical for grafting. Spring is best.

• Decide to stump or scaffold graft.

o Keep after ants and snails

o Remove bags when shoots start growing through them.

o Bi-monthly, in first year, brush out water sprouts. Less often in the next 2 years

Much of this work can be contracted with the grafter, who usually assures some level of performance, something like 90% take. It is up to the grower to ensure that pests do not take out the grafts.

So in the case of both the lemon and navels it costs a bit more to topwork, but the results are earlier production. Here the topworked trees gain the economic advantage. For example, if cultural costs were $1000 per acre per year (20 by 20 ft. spacing) and, conservatively, two years are saved, the maintenance savings per tree would be $18. In the above study the time advantage appears even greater. Three-year old topworked lemons produce about the same as 6-year old replants. Two year old topworked navels have a significantly larger canopy than six-year old replant navels and appear to have about the same fruit set for the coming year. 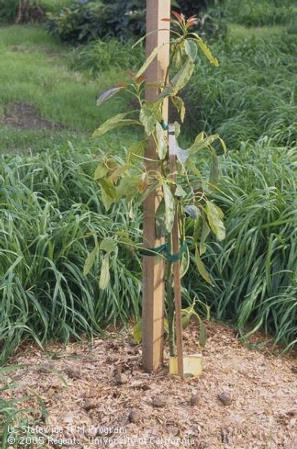 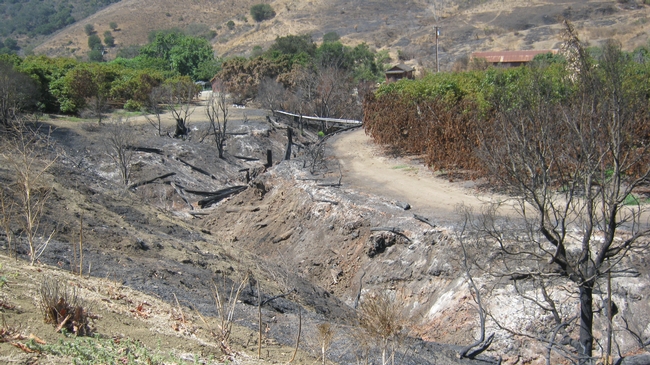 Fire, Flood, Freeze, Fytophthora. It seems like there is disaster around every corner these days. This can be tough for tree growers with a lot of investment in the ground. There has been a special USDA crop insurance available for ‘Hass' avocado growers for several years. For a reasonable amount, a considerable amount of disaster insurance can be obtained:

However,there is disaster insurance available for many fruit crops in all counties in California. This program is The Noninsured Crop Disaster Assistance Program (NAP), administered by the U.S. Department of Agriculture (USDA) Farm Service Agency (FSA). It provides financial assistance to producers of noninsurable crops against natural disasters that result in lower yields or crop losses.

The 2014 Farm Bill specifies that an individual's average adjusted gross income (AGI) cannot exceed $900,000 to be eligible for NAP payments.

Unfortunately, the closing dates for crops like pomegranates, persimmons, and blueberries closed October 1, 2017 for this year, but avocados and citrus are still open until February 2018.

The National Center for Appropriate Technology (NCAT) is seeking input from growers across the nation concerning crop insurance. NCAT is hosting an online survey, which takes 20 – 30 minutes to complete, that will compile grower and rancher opinions, attitudes and concerns regarding crop insurance. The results will remain anonymous and will be used to shape crop insurance recommendations that NCAT, in partnership with a number of other agricultural organizations, will present to the United States Department of Agriculture concerning organic, diversified and specialty crop producers.

NCAT will pay those who complete the survey $20.

Growers interested in participating in the anonymous crop insurance survey can do so by clicking on this link. 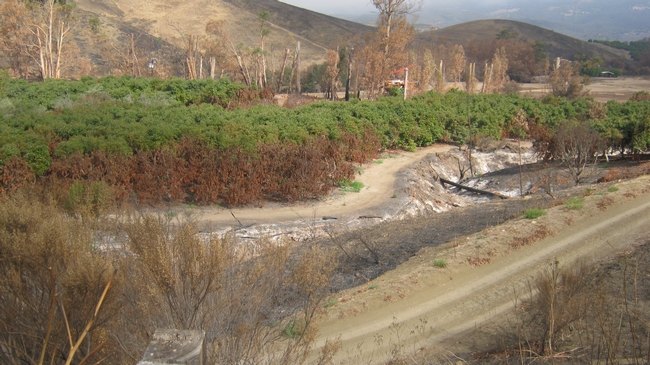