Spotted Spurge (Euphorbia (=Chamaesyce) maculata) is a garden weed that can seem impossible to control. It grows rapidly and starts producing seeds at a very small size. A large plant can produce thousands of seeds. If you pull the weed and leave it lying in the garden, many of the seeds left on the plant will be jumping off to your garden soil before you gather it up for disposal. Spurge seeds will likely emerge from the compost bin still viable, and most gardening sites recommend you exclude all weed seeds from composting. Other weeds that may survive the composting process are oxalis bulbs and the seeds of burclover, amaranth, and cheeseweed.)

Spotted Spurge usually, but not always, has a red or maroon colored spot in the middle of its small oval leaves. The reddish stems contain a milky juice that can cause irritation to skin and eyes upon contact. It grows like a mat, close to the ground which can reach 3 feet across. Aside from growing on any spot of bare soil no matter how poor, in is just as happy to take up residence in a crack in your sidewalk, Seeds form in a tiny triangular pod containing 3 seeds. You may not be able to see these without magnification. The plant can be found in our area from February through September, and seeds begin germination with temperatures reach 60 degrees.

Other names for this plant include Spotted Euphorbia, Spotted Sandmat, and Prostrate Spurge. There are other related forms of Spurge that are not as much of a garden pest. However, some of these spread by roots and may be considered invasive. These include Petty Spurge, Nodding Spurge, and Leafy Spurge (Euphorbia esula). The latter comes in many colorful varieties and is often found in seed or plant catalogs.

The best way to outmaneuver spotted spurge is to pull it by hand when it is small or use a thick mulch, to prevent or discourage its germination. There are commercial sprays that will kill the plant, but the plant will still need to be hand-pulled, wearing gloves, to keep those remaining seeds from being left in the plant's footprint. For the driveway or sidewalks, this is one application where a flame weeder /garden torch could be considered.

Folklore about spurge concerns the milky juice in the stems, which has been claimed to remove warts. Here is one such story. “When I was a very young boy (about 5 years old) I went to a gypsy camp close to Bodmin (Cornwall, England). There was a lady there complaining that the gypsy lady had failed to ‘charm' a very disfiguring wart on her face. The gypsy said she had another way provided she was given silver. Wartweed was produced and the ‘milk' applied to the wart, and she was told to do this daily. The husband refused to pay. The gypsy then cursed him and rubbed his forehead with wartweed. Later that day we saw the husband in Bodmin and there was a bright red cross on his forehead.”

For further information, go to the UC-IPM web site at: 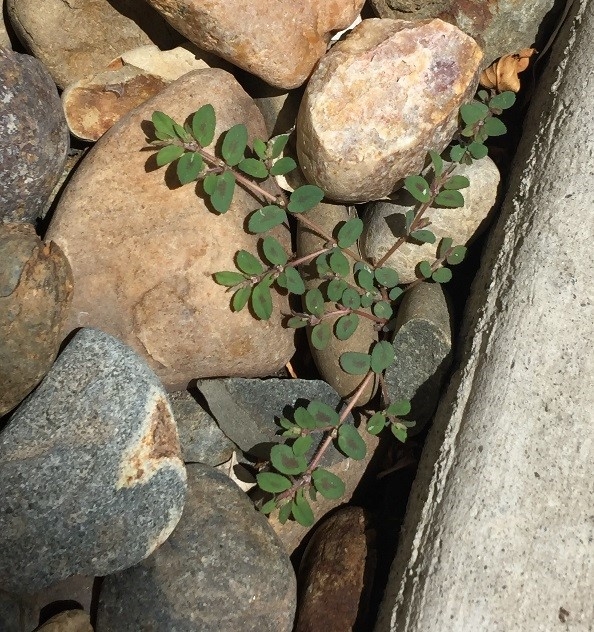 Small spurge plant. (photo by David Bellamy)
Comments: 0
Bulbs: It's Not Too Late to Plant Them
Published on: January 23, 2020

Even in the middle of winter, we know that spring can't be far behind.  We see those delicious leaves from the bulbs we planted years ago just push up and out of the soil and our first hope of that welcome, warmer season dares to fill us with wonder and expectation.

But, all this color and promise takes a bit of forethought.  While our local nurseries tell us that the time to plant our bulbs is in the fall in order to reap the benefits of spring bulbs, with a bit of planning, we can have the magic of bulbs poking up and flowering in our gardens all growing season long.

Bulbs are among the easiest plants to grow.  By carefully selecting varieties with a range of bloom times, our gardens can broadcast color from spring through fall.

Before we go further, we need to recognize that what we call “bulbs”, actually fall into six categories:

Now that we know the differences, we can understand that fall isn't the only time to plant our “bulbs”.

We can begin planting right now in January and February and beyond!

Here are—A-Z--some examples of what and when we should plant each of the six categories described above and, most wonderfully, when we can expect to see “the blooms of our labor”.

I, for one, am off to start the New Year by planting more “bulbs” in anticipation of the surprise of those underground wonders popping up with their riot of color almost all year long. 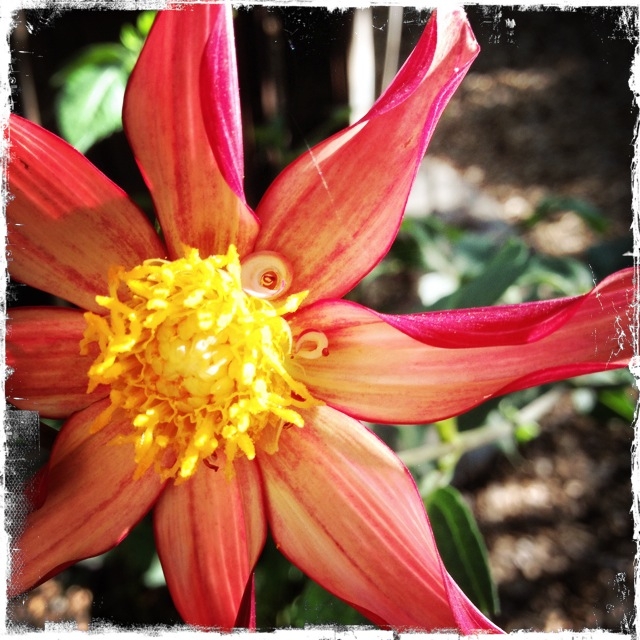 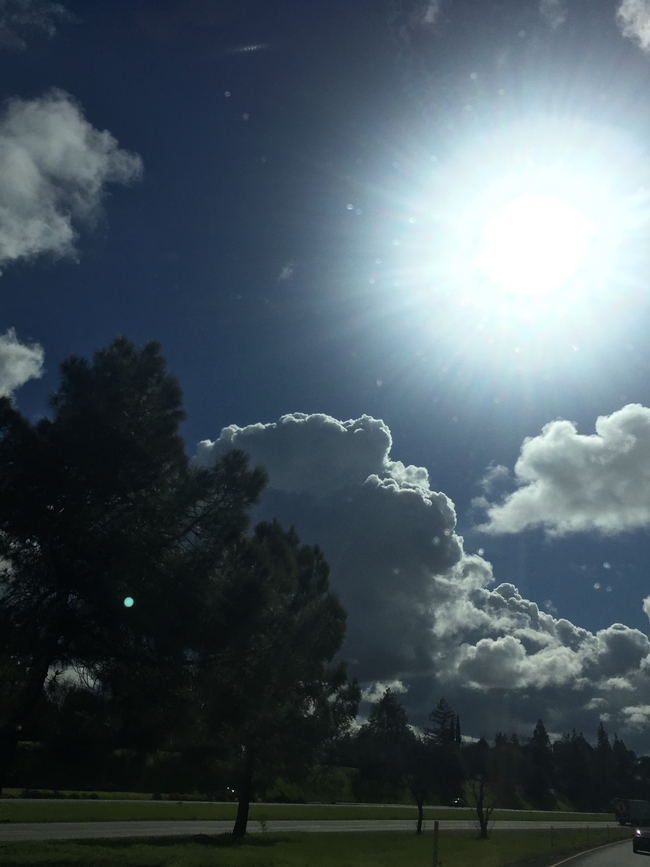 Now is the time to start your Oriental poppy plants.  Oriental Poppies come in a variety of colors. The paper-like petals are almost translucent and are very soft to the touch. The blooms only last a day or two. Be sure to deadhead the flowers. They look best when they are planted in large quantities.

The Oriental Poppy flowers last for a few months and the plants are perennials. They prefer morning sun and afternoon shade unless you live near the coast. They are very easy to grow. Poppies like average - low water. They do not like wet feet or soggy soil. They are deer resistant and can handle winter temperatures as low as USDA zone 5. They grow to 3-4' tall and 1-2' wide. They will spread by seed and create new growth in clumps. They have white taproots that can be divided carefully in the fall. How to start your own Oriental Poppies.

Mix one part humus-rich potting soil with two parts vermiculite. Moisten the soil mixture and put it in 4-inch pots.  Mix 1 part poppy seed with 3 parts fine sand. This prevents you from overseeding the 4” pots.  Sprinkle the seeds into the pots. Top them with a little vermiculite. Spray the soil lightly with water. Cover the seeds in plastic until they sprout. Then remove the plastic. Water the seedling from the bottom using a soaking tray. Keep them evenly moist. Thin the seeds by cutting the ones you don't want using small scissors. Plant them when there is no danger of frost.

Here are some of my favorite Papaver hybridum varieties. Betty Victor wrote a wonderful blog about Mendocino Coast Botanical Gardens recently.  She encouraged blog readers to visit, and I can heartily second that.  What many may not know is that December is actually a beautiful time to visit.  While the summer-blooming flowers are gone, there are still a lot of others that are just getting going including the rhododendrons.  I can also think of two other great reasons to visit.

During weekends from the end of November and into December, the gardens come to life at night.  Thousands of Christmas lights illuminate the core of the gardens.  Lava pours from a stump.  A dragon blows smoke in the green area.  I was there in late October of last year, and volunteers were already hanging the lights.  When I returned for a weekend evening in December with my husband, the gardens were truly magical. The imaginative light placement and designs were amazing.  It was chilly and a little damp, but a choir was singing in the heated tent at the end of the trail.  They were really good, and so was the hot cocoa!

The other reason to visit late in the year is that the whales are migrating.  Take the time to walk the trail to the coast.  If it's rainy or drizzly, there is an enclosed area with a large panel of windows and a front-row view of the coast.  You can watch for whales in there.  We took our dogs (yes, they let you take your dogs into the gardens!), and we walked out to the coastal edge of the gardens.  We stood there for about an hour and saw at least a half-dozen whales' spouts and flukes, a pod of orcas, and lots of sea birds.

It takes a while to get there, but it's well worth the trip! 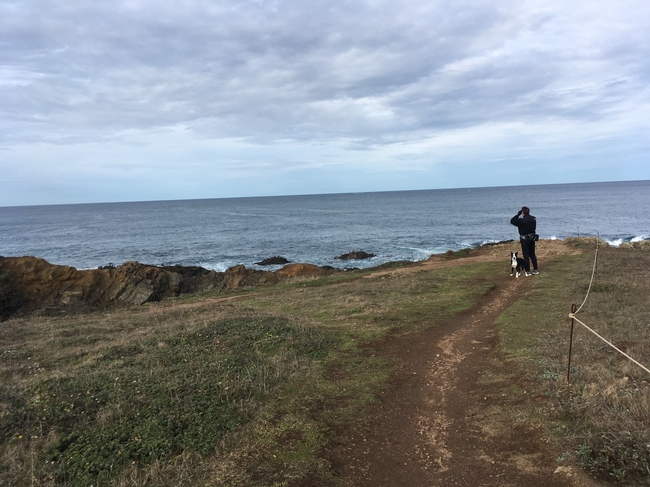 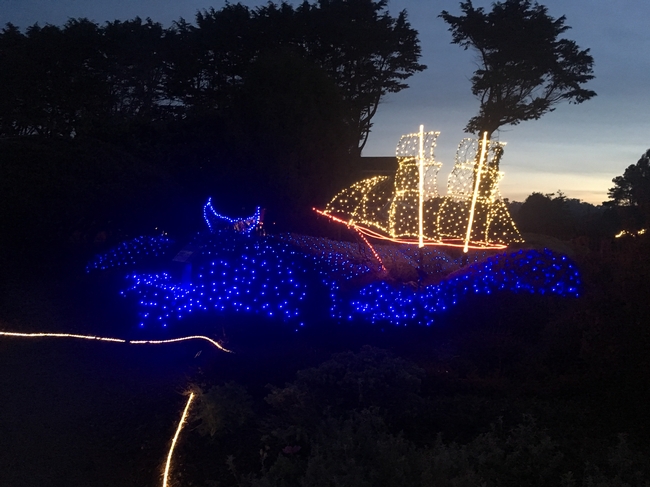 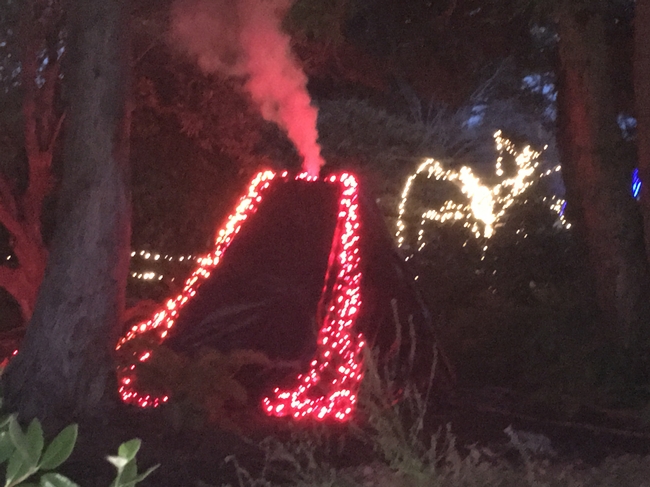