There is a new resource available to anyone that has dealt with ants.  It is a website called Got Ants? Get S.E.R.I.O.U.S.!  It is as they say on their website “a collaboration of public agencies, educational institutions, pest professionals, and nonprofits working to promote environmentally sound ant management and to protect water quality.”  You may or may not know that the pesticides commonly used for ant control are some of the most prevalent and damaging in our waterways.  People spray them on their own or hire companies to do it for them.  The truth of the matter is that spraying is not the most effective or cost effective means of controlling ant invasions.  The Got Ants folks have put together a very simple system for dealing with ants.  Their acronym S.E.R.I.O.U.S.  stands for:

S – Spot where ants are coming in.

R – Rinse with soap and water

I – Isolate food and water sources

U – Use baits if ants don’t go away

S – Stick to it to keep ants away

In addition to strategies for handling ant invasions the Got Ants website asks you to make a pledge “to use less toxic practices (or hire a company certified to provide less toxic IPM services) the next time you have an ant problem.”  I’ve added my name to the list.  I encourage you to do the same.

By the way, if you want to read a synopsis of a study done by Stanford researchers that indicates that ant invasions, and more importantly, their retreat are due to weather, I'm including  the link.  As stated in the article; "People spend a lot of money on year-round pesticides," says Deborah M. Gordon, associate professor of biological sciences and lead author of the study, "but it's not the pesticide that keeps ants out of your home, it's the weather." 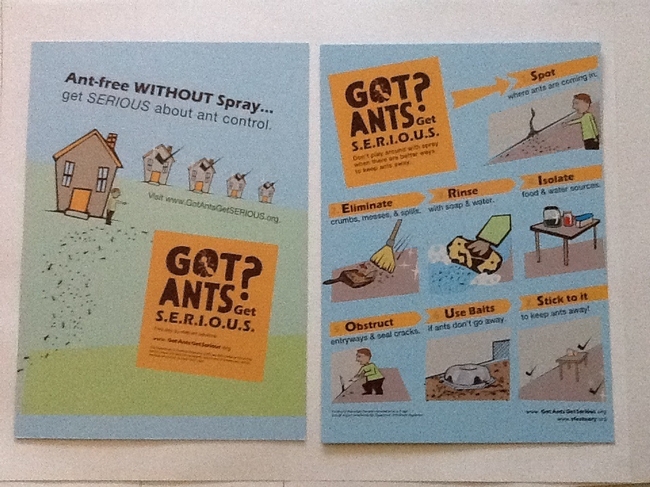 Tags: ants (3), water quality (1)
Comments: 1
How I reclaimedmy castle after an annoying ant infestation: Do's and Don'ts of Controlling Ants

Most everyone has probably found ants in their kitchen from time to time and to varying degrees.  My kitchen happens to be on the 2nd level of our home, so on the occasion that I do find them, it always seems curious and/or amazing that they ‘scale the walls of our castle’ just to find the small amount of compost that I’ve set on the back of the sink for the short period of time before it goes outside to the pile.  However, this past week, we had an infestation of our highest level to date!  First I’ll tell you how I handled my problem, then I’ll tell you how to properly handle the problem!

Let me emphasize that there were a LOT of ants, more than I had seen in our kitchen before, so the first thing I did was panic a bit!  I identified the source of their affection right away, the aforementioned ‘temporary compost bowl’, which had a good bit more in it than usual since I hadn’t wanted to go out in the rain the day before to dump it.  So I quickly got rid of that, cleaned up the invaders by spraying them with a cleaning solution that we use for our granite countertops (recommended by the installers), which is simply a homemade mixture of water, dish soap & rubbing alcohol.

Naturally I thought I had fixed my problem, the compost was gone and any ant I had seen had been terminated.  But a few hours later, I went back into the kitchen only to find yet another group of ants marching around the bay window behind the sink again, but this time I noticed they were going toward a medium-sized pot of jade near the windowsill & sink.  I saw them in the dirt around the base of the plant, but when I lifted the pot up, I was horrified to see at least 30-40 swarming in the saucer underneath!  Needless to say I threw that in the sink & washed all the invaders down the drain, along with the ones trying to hide in the dirt around the plant.  And upon closer inspection, I realized that they actually weren’t coming in from the bay window as I’d originally thought, but instead I discovered their path … across the countertop away from the bay window (toward the center of the kitchen), down the side of that cabinet, across the kitchen floor toward the other side, around the corner into the dining room & then ah-ha, right out of/into the bottom of our windowsill!

So when I thought I had a LOT of ants previously, I realized this was a whole new level … 100 or more to be sure!  Yikes!!  I sprayed & wiped the whole trail of them in the kitchen then placed a container of ant bait in the corner of the dining room & watched them swarm to it.  And real or imagined, their numbers seemed to increase once the ant bait was out, like it had attracted every single one of their living relatives out of hiding!

After watching the feeding frenzy for probably not more than 10 or 15 minutes, I couldn’t stand it any longer, and because I’m not very patient, I decided I had to get my vacuum involved.  I reasoned that enough of them would no doubt bring the ‘tainted treat’ back to their colony so the goal of eliminating their nest would be accomplished, but meanwhile, the others would just have to die a faster death by being suffocated in my vacuum.

Once this phase was completed, I set about making sure the entry point was blocked, so I applied petroleum jelly with a Q-tip into the open area around & underneath the windowsill.  I also discovered some brave explorers in a few places around the kitchen, namely around 2 of the sockets, so I removed the switch plates & applied the petroleum jelly to the outer edges of the opening.

So what should I have done differently & what should you do next time you discover ants in your kitchen?  Refer to this simple yet informational document: From Our Water Our World In a nutshell, practice IPM (Integrated Pest Management) which focuses on long-term prevention of pests or their damage. With IPM, you take actions to keep pests from becoming a problem.  In my case I should have:  1) regularly inspected my plants for any sign of ants/pests, 2) removed compost immediately and/or daily, 3) as soon as I noticed an ant problem, inspect all areas of the kitchen to be certain I know where they were going to/from especially prior to removing their target, 4) once identifying their point of entry, placed ant bait as near as possible to it & be patient as they take it to their colony for eradication, and finally, 5) permanently sealed entry points with caulk.  Read more here:  http://www.ipm.ucdavis.edu/PMG/PESTNOTES/pn7411.html

It’s helpful to remember that ants are a beneficial part of the ecosystem, so certainly keep them out of your house and away from key areas outside, but don’t try to completely eliminate them from your yard altogether.  Not only would that be an effort in futility, it would also upset the balance of the ecosystem since ants also perform many useful functions in the environment, such as feeding on other pests (e.g., fleas, caterpillars, and termites). 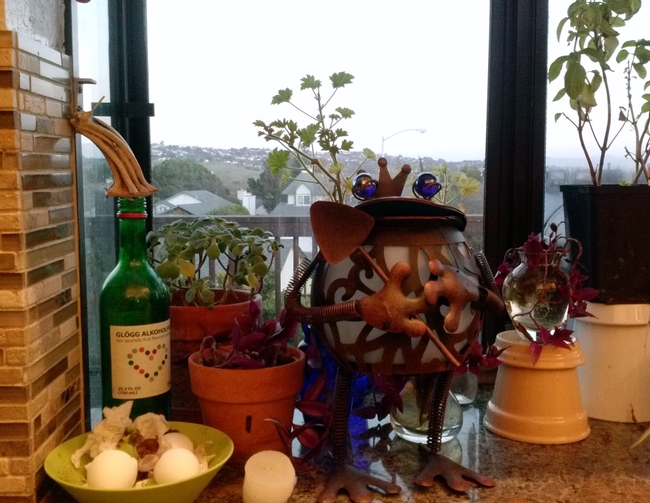 I’ve been walking past  this Pittosporum tobira ‘Variegata’ for at least five years now. It’s in my ‘kitchen’ raised bed, which should have become a vegetable bed, but, lacking enough sun and requiring major soil amendment, became a  place to put plants that I could see from the kitchen. The pittosporum made its way there under false pretences. It’s supposed to produce sweet-smelling white flowers, but its attractive branch structure and variegated leaves are more interesting.

I’ve been pruning it back periodically, because it is really too big for the space, but my husband likes its location (hence the pruning). A few weeks ago, in a vain search for possible flower buds,  I noticed that the new growth had aphids. Not only aphids, but a full complement of ants. It didn’t surprise me, but it means I will have to take some action.

Usually when there are aphids on my roses (which, in Quebec only happens in the spring), I wipe them off or remove them with a blast of water from the hose. If I feel it’s necessary, I’ll use some insecticidal soap solution, but that is rare.  Of course, in California it seems as though it’s always spring, and pruning stimulates new growth. If you prune and fertilize, you’ll get lots of fresh, leggy, sweet-tasting new shoots. Aphids being tended to by ants. (Photo by Riva Flexer)
Obviously, the aphids arrived before I noticed them. Aphids suck fluid from the leaf tissue, and they are often seen on new, fresh growth.  As all living creatures do, they excrete unusable material called honeydew, and ants thrive on it.

So, the ants followed the honeydew trail, and they are "farming" the aphids for their that substance.  They protect aphids from predators, like any good farmer, ants protect a food source, and they eat the aphid excrement. Now I have a dual problem. I’ll let you know what I do to solve it!