Master Gardeners at the Erickson Ranch

The Master Gardeners have had a presence at the Erickson Ranch and Dahlia Farm for many years. We have gone to “the Ranch” as many as 3 to 5 times each growing season. We provide a support table with pest notes, compost information, copies of ‘Seeds for Thought’, and info related to the theme of the event.

During the August event, the focus was on tomatoes, so we provided handouts about growing tomatoes, the vegetable planting guide by Dr. Robert Norris, and a page of the assorted tomato diseases and pests with photos. We had many clients with questions about their gardens and heard their stories about tomato successes and tomato failures. We answered questions and made suggestions for next year.

In September at the “all About Peppers” event, we provided the same support table but added info on planting peppers. We listened as people asked us how to get rid of white flies, tomato horn worms, and mildew on their plants.

Saturday was the last event for 2013 and the focus was on pumpkins. There were pumpkins to purchase, pumpkins to carve, and wagon rides out to the pumpkin patch. The Master Gardeners had the support table full of the usual information and added Halloween masks for the kids and instructions on how to build your own scarecrow. The families came in groups including grandparents, parents with babies in strollers and young children. The Erickson’s had their produce, flowers and jams for sale. The Charlie Wade Blues Band entertained the crowds. Nick, the BBQ man was cooking across the blacktop from Angelina’s biscotti table. Lucas was selling home grown plants while Cindy was making crafts with kids (headbands with fresh flowers being a favorite). Suisun Wildlife Rescue Center had an assortment of birds and reptiles on display. Under a white tent, children were carving pumpkins letting their creative juices flow. It was an entertainment extravaganza. And the best part of all was the six MG’s who volunteered in two shifts and were able to educate the crowds and enjoy the day! A real win-win! 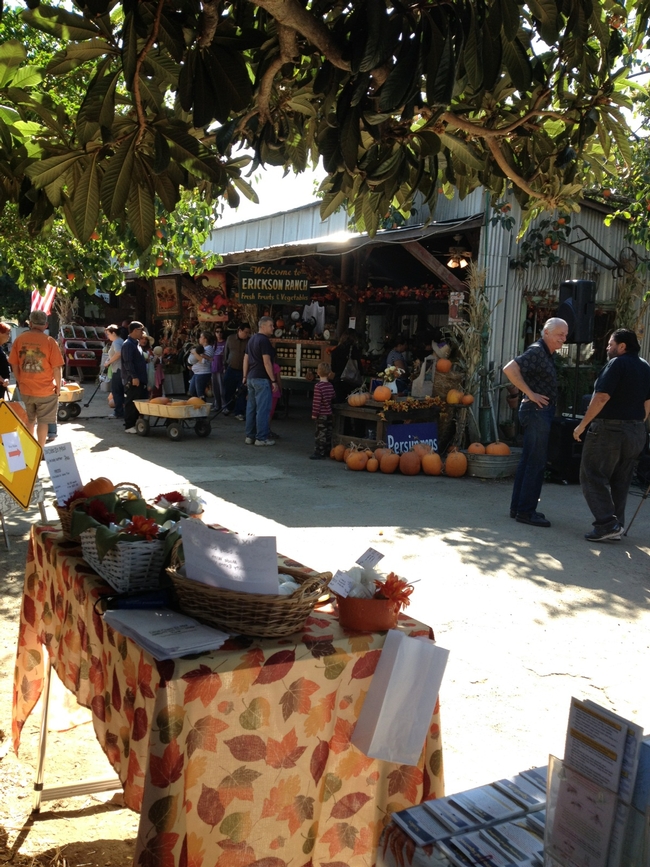 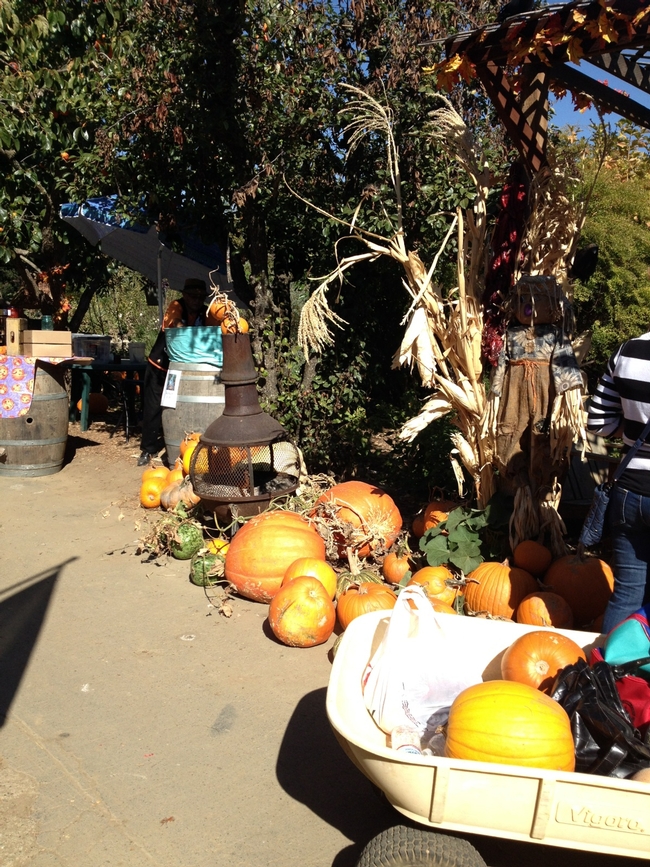 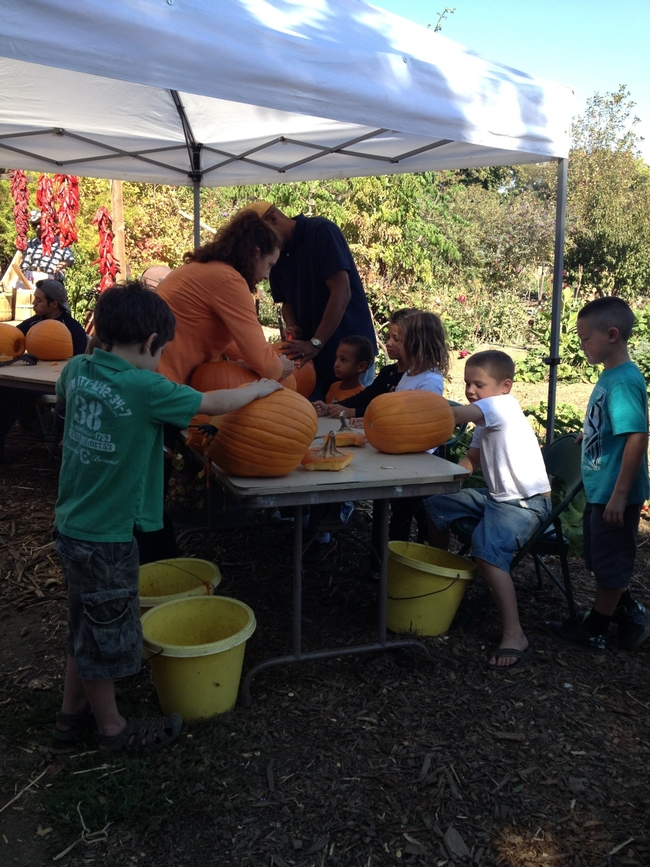 Several years ago, Karen Metz, brought two Bunny Tails plants (Lagurus ovatus) to the Children’s Garden. She thought they would not only be interesting and fun to have at the garden, but something the children would enjoy touching.  If you are not familiar with these small, compact grasses, just picture white, fluffy rabbit tails on a stem. Adorable!

In researching the information on this plant, it states it’s an excellent border plant and suggests planting it along walkways so it will tickle your legs as you walk pass. It’s drought tolerant once established. You can also grow Bunny Tails in containers as an accent plant. Blooms are 1 to 2 inches wide and the plant grows one to two feet tall. In the fall, the fluffy white tails turn tan and can be cut to add to dry flower arrangements.

Two years ago, it was suspected that a groundsman sprayed one of our Bunny tails with an herbicide. They do look similar to a weed when they are “tail-less”. Our remedy for the next one we planted was to place a small cage around it with a stake that denoted it was a PLANT and not a WEED. Well, the Bunny Tail grasses are not surviving in the little garden, despite our best efforts.  I have decided they are not an easy grass to propagate or grow in an area you cannot keep under constant observation. 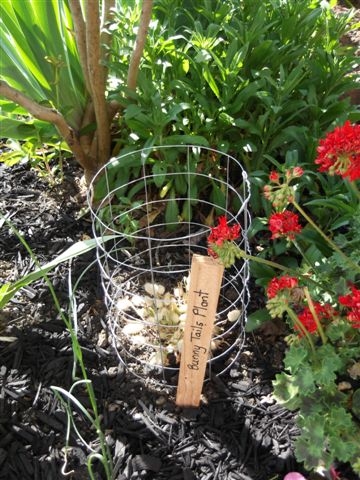 Don’t you just love spring? It’s such a colorful, happy time with so many things to see and do. One of my favorite trips is to the Western Railway Museum on Highway 12, between Fairfield and Rio Vista. During the month of April you can take a peaceful, short train ride out into the country to see the wildflowers. I recommend going near the end of the month when you will see the most blooms.

As a small child, I lived in San Rafael with my grandparents. They loved riding the train and we would travel from San Rafael to Santa Rosa and back. They celebrated my 5th birthday on a train, so that is probably my fascination with old trains. The electric trains at the Western Railway Museum date back to 1890 (before I was born, for sure), and have red velvet covered seats and stained glass windows. This year there will be two special trains, the Scenic Limited and the Vintage Comet. For a few extra dollars you can have lemonade and cookies during the train trip.

And the wildflowers will knock your socks off. There are California poppies, California Golden Violets, Douglas’s lupines, wild hollyhocks, Red Owl Clover (Orthocarpus purpurascens), Brass Buttons (Cotula coronopifolia)and Tidy Tips (Layia chrysanthemoides). Masses of color swaying in the wind will keep you taking photos.
The train ride is 5 miles out into the countryside and 5 miles back. You will see wind turbines, livestock, butterflies, dragonflies, native wildflowers and the Shiloh Presbyterian Church built in 1870. It is a fun and relaxing event so mark your April calendar. 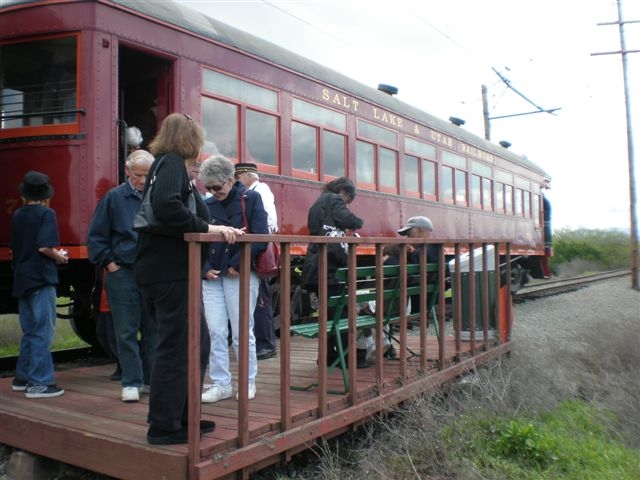 Passengers on the Western Railway. photos by Sharon Rico 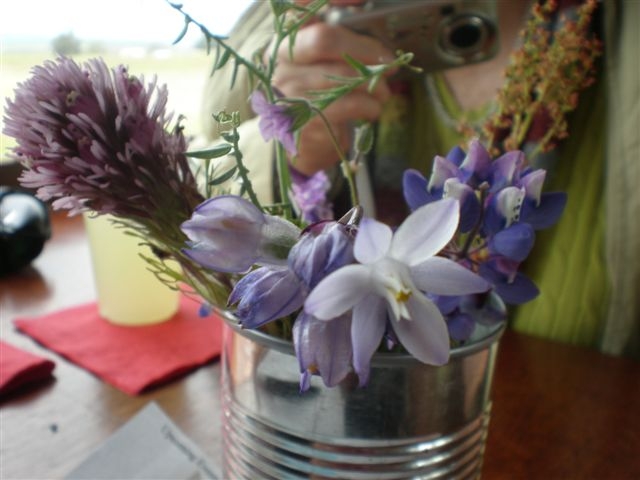 The group I sometimes hike with visited Rockville Hills Regional Park.  I was there a few years ago on a field trip with the Horticulture Dept. at Solano Community College (we had a docent who knew the wildflowers).  It’s 633 acres of grasslands and oak woodland, lots of wildflowers, and 6-7 mile hike, some ups and downs.  It's easy to turn back if you want a shorter hike.  There's a bathroom about 45-60 minutes in.  The cost is $3/person $1/dog fees, or you can get group discounts, seasonal membership, etc.  Find more info and links at:

Here is a trail map:

FROM EAST BOUND I-80: Take Abernathy Road exit and head west. At the roundabout, turn left to Rockville Road (OR take Texas Street exit, turn left, go under the overpass, continue on Rockville Road).  You will cross through the intersection of Suisun Valley Road.  The Park is about 3/4 of a mile on the left hand side. Look for a chain link enclosed parking lot

TRANSIT & TRAILS offers on-line public transportation planning to get to the Emerald Bay Drive entrance of the Park from the Bay Area! http://www.transitandtrails.org/

On Fairfield website under "Public Works" are additional resources (I've listed them below)  http://www.fairfield.ca.gov/gov/depts/pw/parks/links___additional_resources/default.asp

The images here are by John Lord, a member of the hiking group.  See numerous other images at: 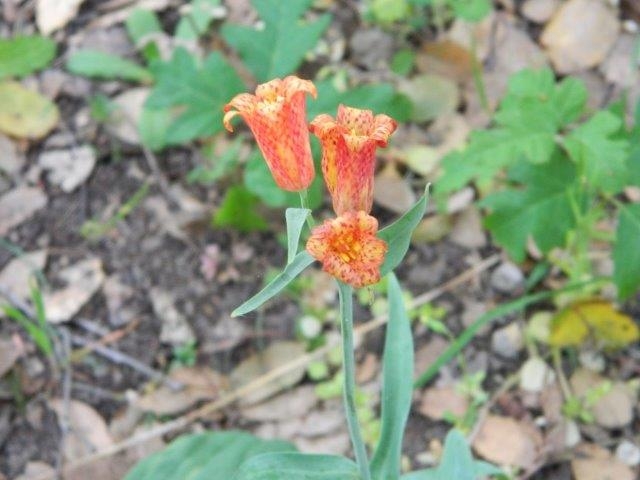 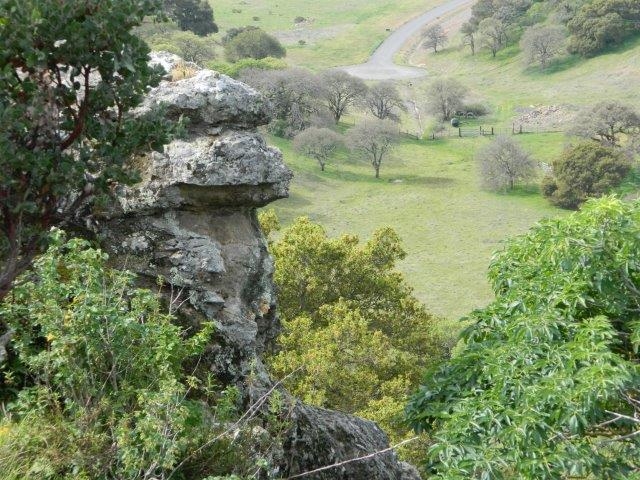 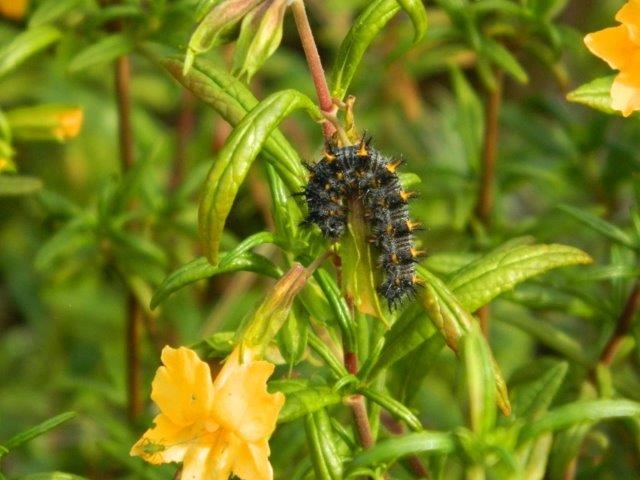 In the spring of 2007, the Solano County Master Gardeners took on a project of designing, planting and maintaining the Children’s Memorial Garden on Beck Ave., in Fairfield. The dream for this little garden was a colorful, happy place to honor the children who died as a result of violence in Solano County. The garden, when the Master Gardeners were first introduced, was barren, full of weeds and had rocks and boulders haphazardly dumped throughout. Not what the county had originally envisioned.

Master Gardener, Carolyn Allen, created a design plan and in April of 2007,  a crew of Master Gardeners arrived to place plants that were ordered by Solano County Grounds Supervisor, Jim Simon. The garden has matured into a lovely, peaceful setting that is enjoyed by the employees at Solano Health and Social Services, the clients using that facility, and the general public.

This spring, vegetables were added for a bit of whimsy. There are strawberries, tomatoes, an eggplant, celery and red Swiss chard. The plants are thriving. In fact, the tomatoes and strawberries have fruit which is ripe and ready to pick. These plants are labeled with wooden stakes next to them.

Two Bunny Tail grasses (Lagurus ovatus) were added early this year, and protected with metal cages. This particular plant had been placed previously, but resembling a weed, it was sprayed with an herbicide. We’re hoping the cages and wooden stakes will keep them from future demise.

Every year on the last Friday in April, a lunchtime ceremony is held at the little garden. Local dignitaries speak, a Children’s Memorial flag is flown and parents of these little victims come to honor “our” children. This year, fourteen pairs of children’s shoes were placed on a hopscotch board to represent the young victims in 2011.

From February to November, Master Gardeners, show up early at the garden to clean the litter, deadhead plants, add new plants, pick veggies, fertilize and generally maintain the dream now realized. It is a labor of love to maintain the Children’s Memorial Garden. 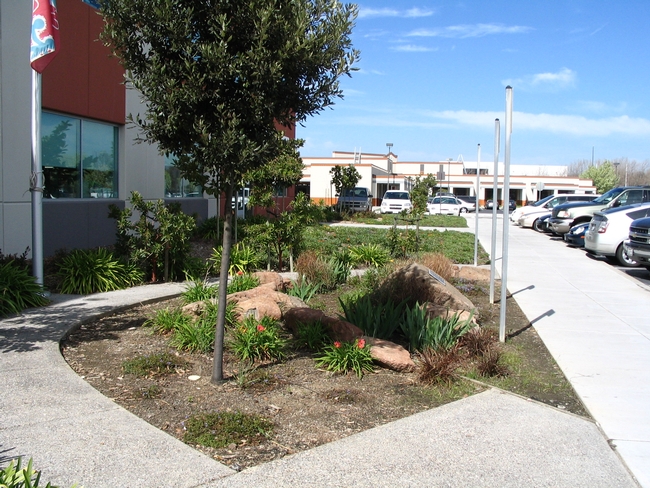 Garden after cleanup, and relocation of boulders. (photo by Carolyn Allen)

Garden when it was first replanted. (photo by Carolyn Allen) 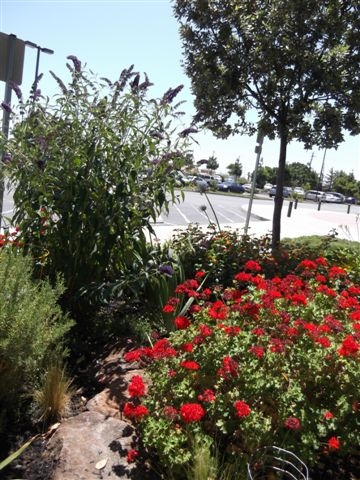 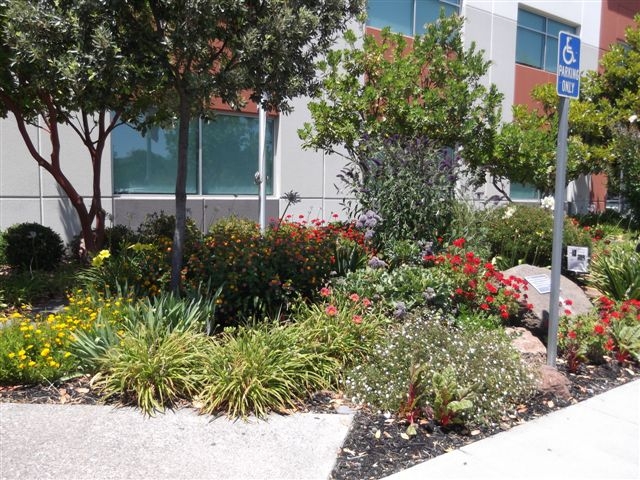