In the dead of winter, what could be more inspiring than to have your own well placed Cymbidium orchid opening up before your eyes.  My Cymbidium is about 8 years old, and this year’s blooms have been the most spectacular since the time of purchase.

First, a little background on this amazing orchid.  My 2012 Sunset Garden Book tells me that Cymbidiums are among the cool-growing orchids, and that instead of clinging to trees in the tropics, they are terrestrial, and grow in moist humus-rich soil.  And unlike their tropical cousins, they do best with temperatures of 50-55 degrees F at night, and 60-75 degrees F during the day.  In fact, they need cool night-time temperatures in order to bloom.  My experience shows that they do just fine with temperatures from mid 30’s to 40’s, so long as they have some frost protection.

I first noticed 3 bloom stalks appear in early November.  The pot was under an Avocado tree in the back yard, where it got filtered afternoon sun.  I used periodic, usually weekly waterings with diluted compost tea from my worm bed as the sole fertilizing agent.  When the buds became more mature in early December, I moved the pot to a sunny corner inside the front porch, where we could watch the buds open gradually.  The showy opening of the buds started about two weeks ago, in early January, and they should remain stunningly beautiful for at least another two months.  And despite recent temperatures hovering around 32 degrees F at night, they have proven to be remarkably hardy, however  their location on the porch provides good frost protection.  Last year we were not so lucky.  We lived in Sonoma County, where the winter temperatures dropped into the mid to upper 20’s F at night, which resulted in bud die-off on this same plant.

Three weeks ago, I successfully averted an infestation of aphids on the (still unopened) buds.  I carefully wiped them off with a wet paper towel that had a diluted solution of dish soap.  You can also use Safer insecticidal soap, which will not damage the buds.  This seemed to do the trick, and they have not reappeared.

So, my salute to this hardy winter blooming gem! 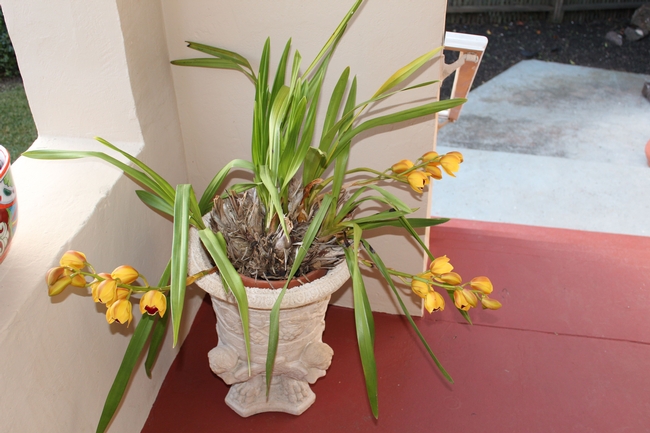 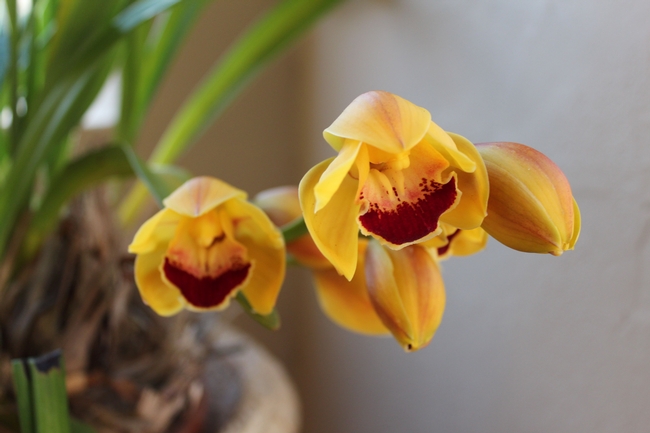 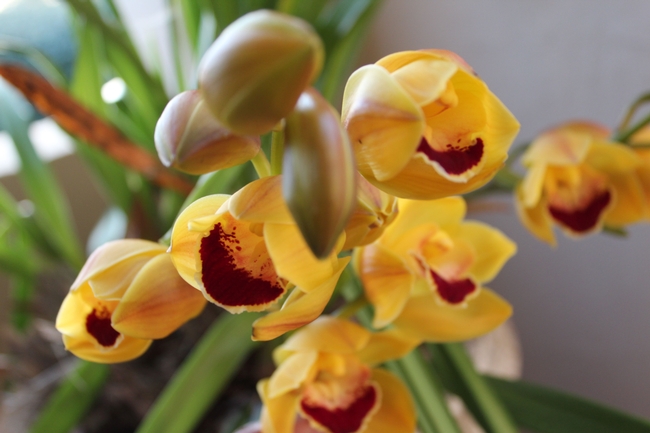 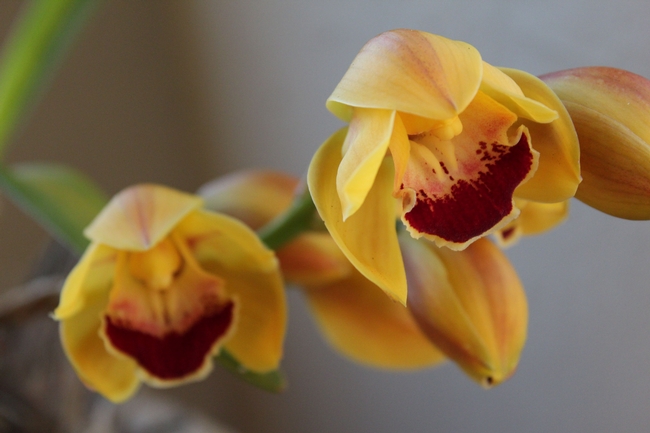 I love looking out my sliding glass door to the Cymbidium orchids blooming on my patio. I look forward to bloom time each year. The bloom spikes are amazing, each blossom perfect, intricate, and exotic.  I love that the flowers are so long lived whether you leave them on the plant or bring them inside.
It took me a while to find the right place for them. At first, I had them in full sun and they fried during our hot summers.  Nest I tried placing them under my Podocarpus gracilus (Fernpine trees) but they got too much shade there, ending up with rich dark green foliage, but no flowers. Finally after we got our lathed patio cover, I put them there and they seem to be doing much better. n They would probably do even better if I would remember to fertilize them on a more regular basis.  The books say every 10 -14 days; mine are lucky if they get any once a month.
I'm just impressed that I can leave them outside during the winter. I do cover them with a sheet when frosts are predicted. I also have learned to inspect them frequently for snails and slugs that love to munch on the blossoms.  Of course our reactions to plants are often colored by our past experiences. Being a Master Gardener often allows us to talk to gardeners that have come from other places. One couple from Michigan looked ecstatic when they found out they could grow orchids outside, while another gardener from the San Diego area was very disappointed that she would only be able to grow one kind of orchid outside.