My waiting game has begun. Every year, when spring rolls around, I have to wonder. Will they bloom?

I'm talking about the six common lilac bushes, Syringa vulgaris 'President Grevy', in my front yard. We planted them soon after we moved in to our home 13 years ago. They were the first major planting we did after the lawn and fences went in. I wanted a nice tall row of bushes along the edge of our front yard, and my only requirement was that it had to be something that bloomed. Roses were not an option, because I didn't want to take the chance of my kid(s) falling in to them while playing on the grass. I considered the butterfly bush, Buddleia, because of it's beautiful flowers that hummingbirds and butterflies love (not to mention it's unique scent). However, the ones I had in my previous garden had a tendency to look straggly, and I didn't want that because it would be the first thing you see when arriving at my house. Anyway, the lilacs just seemed the best fit for the area. Besides, imagine how beautiful they would be covered with all of those intoxicating flowers! I knew they were just what I wanted.

Syringa vulgaris, a species of Syringa in the olive family Oleaceae, is an upright deciduous shrub, approximately 10-15 feet high. The flowers are fragrant, upright clusters, most commonly lavender or white. They grow best in full sun in a neutral or lime, well-drained soil. They do prefer a nice, cold winter, something we didn't see much of this past winter. Any pruning should be done immediately after flowering, or you run the risk of not having flowers set for the following year. Regular watering, especially during our hot summers, is a must. While I just put an occasional shovelful of compost around mine, you can give them a dose of a general purpose fertilizer before new growth. Overall, I have found my lilacs to be quite low maintenance plants.

Back to my waiting game. In the 13 years they've been here, I have had several spring blooms that were pretty, gave me some flowers to smell and place in vases in my house, and enjoyed. I have also had a few springs of virtually no flowers blooming. Twice I have had some flowering in late August, and this past December, I had two shrubs with a number of small flower clusters. So why do I  bother with lilacs in our area if flowering can be such a gamble? Five years ago, my lilacs had a spring bloom that was jaw-dropping. Each shrub was absolutely covered in the most beautiful, breathtaking, fragrant flowers. They were gorgeous! I figure if it happened once, it will happen again. I just have to be patient and willing to play my waiting game.

February is usually a cold wet month, but it has an especially fragrant treat, the violet. In the Sunset Western Garden Book, it is listed under Viola. Viola adunca, the California Sweet Violet or Western Dog Violet is native to coastal bluffs and Sierra foothills in central California, Pacific Northwest east to New England. That said, it is the easiest plant to grow and stands 3-6 inches high, spreading indefinitely by seeds and stolons (creeping horizontal plant stems or runners that takes root at points along its length to form new plants). I can attest to the ease of growing violets, as I took a few from my Mother’s garden and they have moved with me to four homes in Solano County. This darling little February flower has dark green heart shaped leaves with lavender blue with white petal bases and bright orange stamens. If you are extremely patient, you can enjoy their beautiful fragrance by gathering a small bouquet for your house. They bloom with at least a half-day winter sun, and summer shade. They take various soils and can be invasive or affective ground cover in a slightly shaded area of your garden. I actually like a few violets in the lawn. Often they are sold in nurseries as Viola odorata. 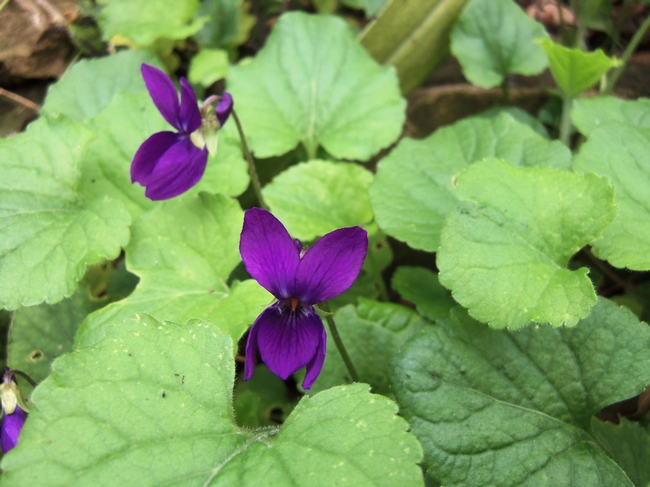