Freeze damage to plants can be anything form leaf and fruit damage to complete death of the plant. If you've had lingering tomatoes and basil this year, you've seen it first hand. They're finished, but we expected that. However, lots of people have citrus trees in their yards. In the citrus family the lemon, limes and citrons are the most sensitive to freezes, some of them suffering damage at 28ºF. Following them are the grapefruits and regular lemons. 'Meyer' lemons, oranges and mandarins are the most hardy and will be affected when temperatures get closer to 20ºF.  Avocados, guavas and loquats can also suffer in cold temperatures.

So what to do?

Generally, if the tree is mature and healthy it will survive. Newly planted or young trees should be protected by wrapping the trunk with cardboard or other insulating material. Be sure the soil around the tree is irrigated and free of mulch to let the water and the earth radiate to the tree the warmth that they have. Hanging a low-watt light bulb or a string of Christmas lights in the interior of the tree will also provide just enough warmth to protect it. Still, the fruit and the leafy canopy of any of these trees may suffer damage. Fruit like lemons or oranges that are hit by a heavy freeze will quickly dry out. If the fruit is picked within the first few days after a freeze it may still be usable, but left on the tree will begin to rot.

If you do see freeze damage on your fruit- or nut trees, don't rush to prune. Be patient. Some years ago the temperature in our area dropped to 19 on two consecutive December nights. My 'Eureka' lemon was hit very hard. It lost all of its leaves and appeared to be dead. I was on the verge of taking it out the following spring, but Sunset Magazine recommended waiting to see if anything sprouted. It took quite a while, but by May we saw the first little green shoots. We now have a magnificent lemon tree that at times produces fruit the size of a small grapefruit. I suspect it is no longer a Eureka, but it sure does produce great lemons!

The University of California website http://homeorchard.ucdavis.edu/8100.pdf can give you even more details on how to protect your garden. 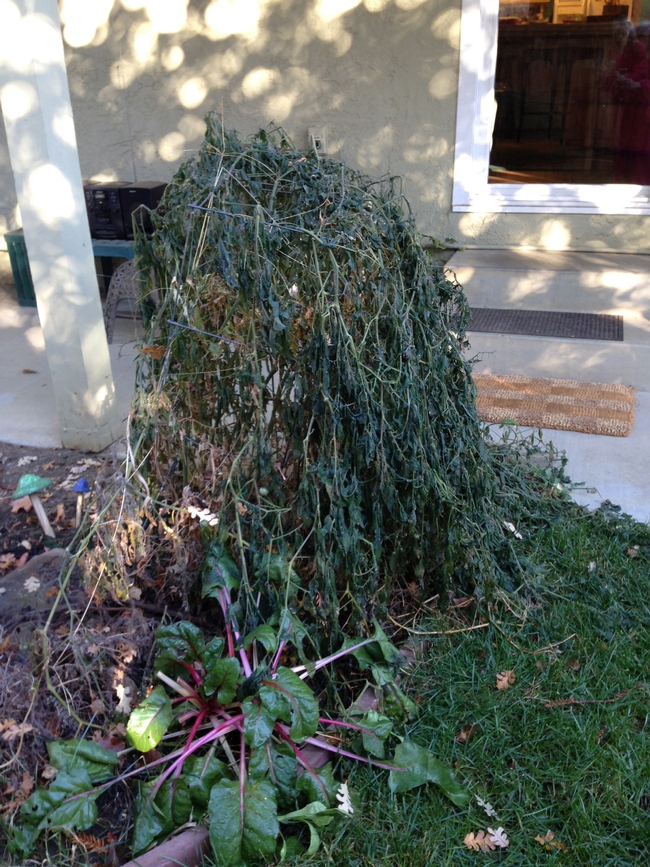 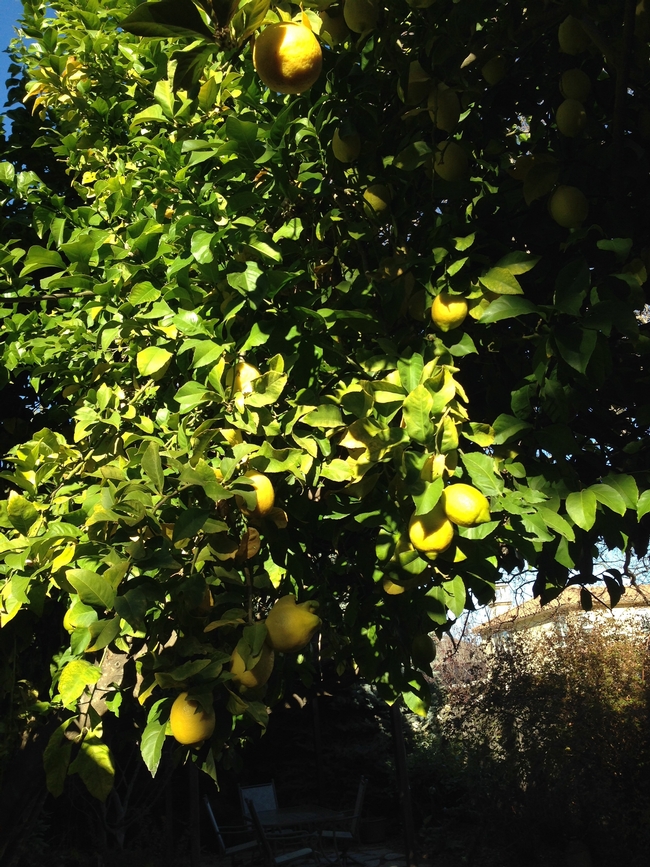 I still have not cut back anything in the garden because although temperatures "appear" to be rising, where I live, we're not quite past the danger of overnight frost.  Just a reminder, you still have until around Valentine's Day to cut back your roses, so don't stress on that.

As I said in my January blog, frost is water vapor freezing on the surface at a temperature of 32˚F or below, forming tiny ice crystals when the water vapor condenses.  Frost injury occurs when these tiny ice crystals form on the leaf surface, drawing moisture from the leaf tissue.  Thus, dehydrated plants are vulnerable.  Keeping them watered helps to protect the roots and warm the air near the soil (water gives off heat, damp soil retains heat better than dry soil).

I have two Salvia leucantha (Velvet sage or Mexican bush sage) in my front yard.  The one nearer the street is more susceptible to wind and cold and always has a tougher struggle.  They have been surviving the frost quite nicely, thank you, both hanging on pretty good through this cold spell while I was watering once a week.  I had not watered the last three weeks plus there were continuous overnight frosts.  Alas, both Salvia's finally bit the dust. On the bright side, this has happened a couple times before.  I'll do the same thing I did then--cut them back (once the danger of frost has completely passed).  They WILL revive and thrive, as you can see from these photos taken AFTER I lost them the last time.  Some advocate cutting it back every year anyway.  http://www.morningsunherbfarm.com/product_info.php?products_id=335

Meanwhile, the Lavandula dentata (French Lavender) hasn't missed a beat during these frosty nights and, indeed, appears to have thrived. 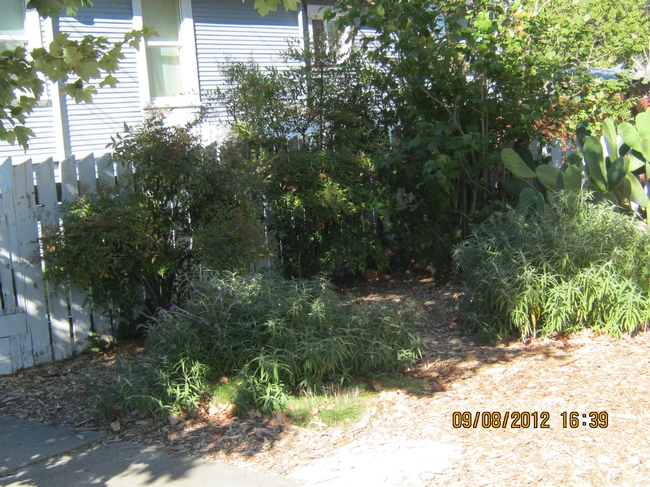 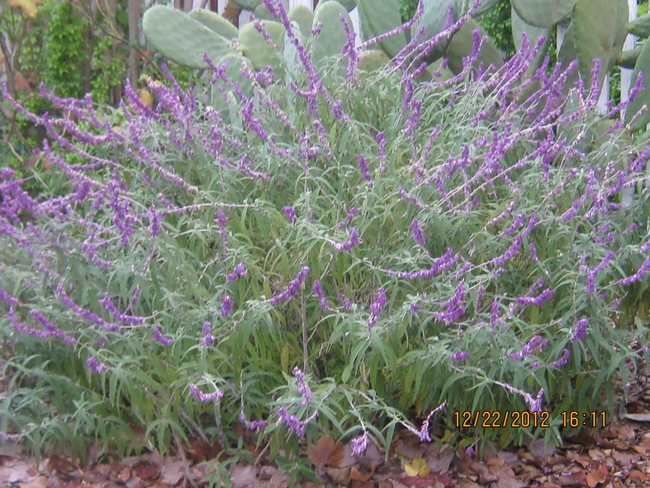 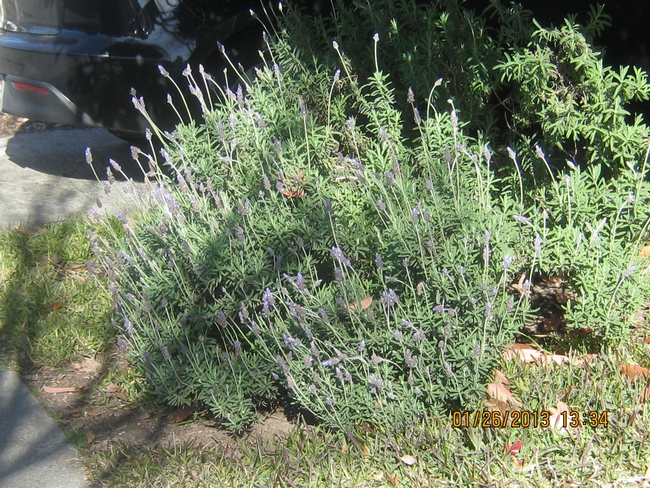 Published on: January 2, 2013
I find picking oranges a bit nostalgic at the start of each new year. Raised on a Southern California citrus ranch, I remember many a cool clear January night siting beside my dad as he listened to the radio for the weather report and waited for the ominous freeze warnings. With news that temperatures were forecast to dip into the danger zone, my mother bolted into action—filling the thermos with freshly boiled coffee and draping furniture and Venetian blinds with bed sheets to protect them from soot. Then, she hurried outside into the darkness to catch up with my father, and the two of them spent the remaining hours monitoring the coal oil in the smoldering smudge pots until dawn cast its warmth upon the orange grove.
Tonight, decades later, with frost in the forecast, I head out into my own backyard to pluck the last oranges from a semi-dwarf Washington Naval tree, and I savor memories sandwiched between these past seasons of my life and this growing season that just passed.  Frankly, I can’t wait to stand at the kitchen counter, digging my fingernails into fragrant orange peel to reveal the juicy sections curled inside. These sweet oranges (Citrus sinensis) not only influenced the agricultural landscape and history of California, but my life as well. With every residential move I made, I left behind at least one orange tree that I had planted in each garden. And I learned an applicable life lesson: fruit quality often improves as a tree matures. 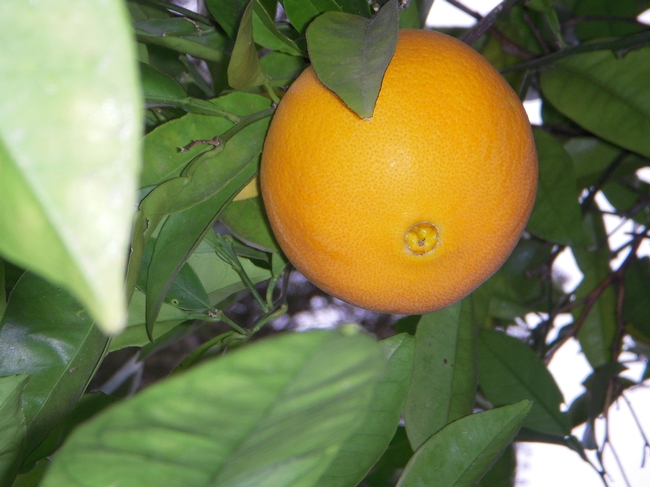 My poor garden is so confused! It is November, correct? I was outside, in shorts and sandals, watering my thirsty plants in the heat this week. So many of the trees have not turned color and started to drop leaves yet. I'm usually doing some pretty heavy raking of leaves by now. I'm wondering if and when fall will arrive here in California.

In spite of the unusual weather, I did do some random fall chores outside. I went ahead and took out the tomato plants, picked the pumpkins and discarded the vines in anticipation of the possible upcoming frost next weekend. The morning glories have continued to bloom every day, although not as profusely. Even so, I pulled down the vines and tossed them in the compost bin. Various perennials were in need of deadheading, so I took care of that. What leaves are falling were raked up, as I don't want to encourage the various fungus and bugs that love their habitat to take over (I have enough trouble keeping rust and black spot at bay as it is on my roses!). I mowed the grass, hoping that if we do have a frost, it'll be the last time I have to mow until springtime.

Turning to my patio, the outdoor furniture is now all under cover from the rains. The summer annuals in the pots were still looking pretty, but I'm ready for winter annuals. So…I pulled out the salvia, petunias, and begonias, cleaned the pots, added fresh soil, and put in some beautiful pansies and cyclamen. With the freshly picked pumpkins next to the pots, it looks much more like fall on the patio.

Like a siren’s song, the tomatoes are calling to me. Blame it on the moist soil, the longer days, and the need to plant something new and productive. And it’s gonna happen soon, the planting of the tomatoes. The threat of frost still hovers over Zone 9, but I know I will throw caution to the wind and plant before April 15.

But, this year, I will not plant our tomatoes in the raised beds tucked into the southwest corner of our lot. This year, I will slip those beautiful little seedlings into a stone-lined bed right smack in the middle of our back yard. Yep, right next to the tiny lawn and the salvia (S. microphylla 'Hot Lips') and the creeping myoporum (M. parvifolium 'Putah Creek').

Call me a rebel. I’m going to plant edibles amongst the bloomers. Heck, I might sneak in some bell peppers amongst the penstemon, some basil next to the lavender. I could get used to growing food in the beds that normally grow just pretty flowers. It seems like a much more efficient use of rich, sun-drenched soil, and the irrigation is already there.

Who knows? Today I take over a smallish planting bed. Tomorrow it may be the area where our lawn now grows. I’ll keep you posted on the “revolution” taking place in my back yard. 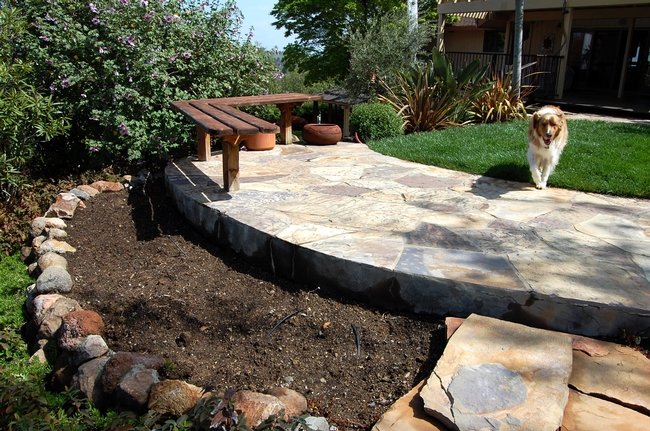