I have never aspired to grow a giant pumpkin like those celebrated in Half Moon Bay, but I thought it would be fun to grow a few small pumpkins of our own for the children to decorate.  For the past two seasons, I’ve experimented with different varieties in different locations, focusing on the very small varieties such as ‘Small Sugar’ and ‘Jack Be Little’ with extremely limited success.  I’ve tried planting them in the limited, and thus precious, space of my small raised bed, tucked in out-of-the-way (yet well composted) areas of the yard, and in containers.  I even tried growing mini pumpkins vertically, which really wasn’t very successful (although two minis are better than none, I suppose).  The larger pumpkin vines have eked out a pumpkin or two, but really haven’t produced very well.

So this year, while I couldn’t give up entirely, I didn’t try very hard.  I threw a few leftover seeds into a garden box next to my deck and promptly forgot about it until my husband asked one day, “Did you really plant a pumpkin THERE?”

Yes, indeed, we had a happy, healthy pumpkin vine growing in a small box with limited soil--it must have appreciated the full sun and regular water in that location because there wasn’t much else to live on.  I can’t quite recall what seeds I threw down, but I believe it is ‘Rouge vif d'Etampes,’ also known as the ‘Cinderella’ pumpkin because its shape resembles the fairy tale coach.  It is an heirloom pumpkin with beautiful deep orange-red skin.  Although we lost the use of part of our deck for a few months, gingerly walking around the vines, it was worth it to watch one pumpkin grow to full size and to anticipate several others that were close to maturity.

But then pumpkin tragedy struck. All of a sudden, in mid-September, hordes of whiteflies descended.  Whiteflies are small insects that are usually found on the underside of leaves in large numbers.  If disturbed, clouds of them will arise from the plant.  Two types of whiteflies infest cucurbits (the plant family that includes pumpkins and squash)—the greenhouse whitefly and the silverleaf whitefly.  The silverleaf whitefly is relatively new to California, but it is a serious pest and has the potential to cause considerable damage to cucurbits.  Feeding on the plants causes their leaves to turn whitish or silver, hence the name silverleaf whitefly.  More information about whiteflies and cucurbits can be found on the UC Integrated Pest Management website at http://www.ipm.ucdavis.edu/PMG/r116301211.html.

Given that I didn’t anticipate my pumpkin plant would grow, much less be infested by whiteflies, I obviously didn’t plan for any cultural controls and I don’t care to use most sprays (mostly due to laziness). Insecticidal soap is a treatment option, but it requires frequent applications and full coverage when spraying.  I simply don’t have the time or the patience to spray the underside of each leaf of a sprawling pumpkin vine multiple times.  We harvested our one large pumpkin, cut the vines without small pumpkins in the hopes of reducing the whiteflies’ feeding area, sprayed the plant once, and cross our fingers that this would control the pests long enough to harvest a few more pumpkins.

But alas, clouds of whiteflies are not the company you want to keep when relaxing on a backyard deck, so I ultimately harvested one more pumpkin and hauled the infested vines to the trash.  I didn’t even dare compost them since they were so infested.  The harvested pumpkins are now developing dark spots – I keep telling myself that it is natural variability in their coloration, but I am a little worried that somehow the whiteflies have caused the pumpkins to rot.  Time will tell.  No fairy tale ending here for our ‘Cinderella’ pumpkins, but we did enjoy the story while it lasted. 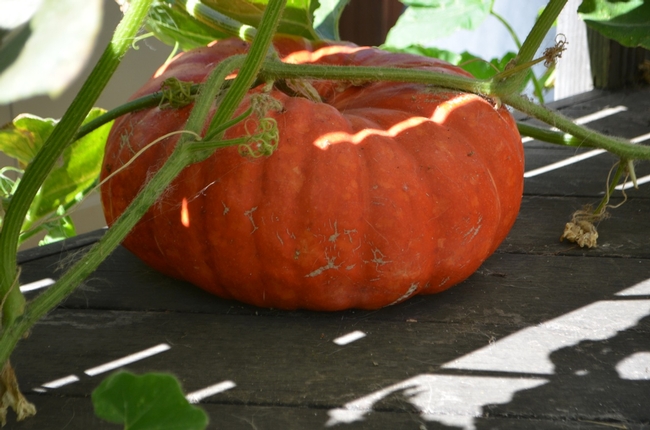 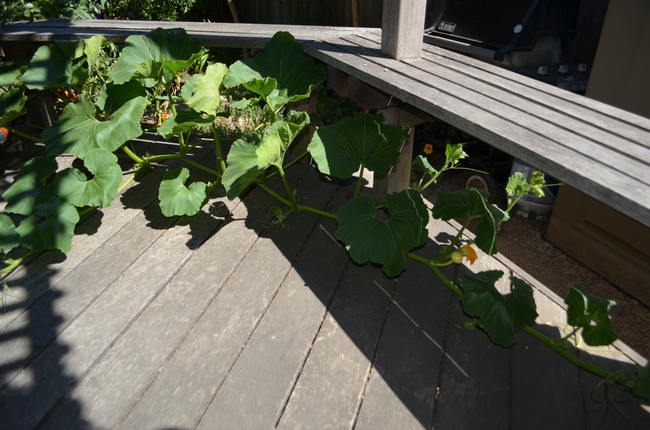 Vine taking over the deck. 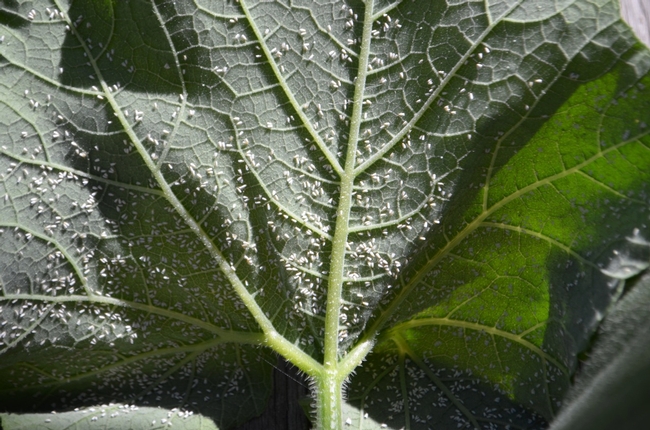 In modern America, pumpkins are the iconic symbol of the Fall season.  Pumpkins are a gourd-like squash of the genus Cucurbita from the family Cucurbitaceae and they are native to North America.  The word pumpkin comes from the Greek word 'pepon' meaning large melon.  Pumpkins date back to 5500 BC and were traced to what is now modern Mexico.  They are monoecious, meaning that they have both male and female flowers on the same plant.  Pumpkins are a good source of lutein and beta carotene.  They are a warm weather crop most often planted in July and they grow best in soils that retain water well.  Modern American uses during the fall season are to carve jack-o-lanterns, for pumpkin pies, or part of seasonal table top displays.  The seeds from inside the pumpkin can be roasted and consumed, pumpkin can be used to fill ravioli, or be used to flavor brewed beers.  Canned pumpkin can be effectively used to treat cats and dogs who experience digestive issues, as I recently had success with first hand.  Inevitably most of us will consume pumpkins this Fall in some form or fashion so its nice to know some interesting facts behind the fruit. 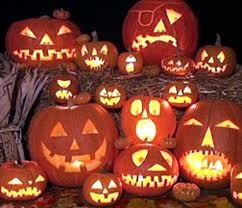 How much of an image does this phrase conjure up in our mind? Linus sitting in the dark field waiting for the “Great Pumpkin” to show up?  The pumpkin (Curcurbita pepo) at this time of year comes into the spotlight as  Halloween pumpkin carving and growing contests abound. It’s fun to see what our imagination can come up with from the traditional triangle eyes and  jagged toothed mouth, to complete works of art and vignettes of these  and other popular squashes.  Just do a quick search on carved pumpkins and you’ll find more than your fill. Alas, pumpkin at and after Halloween can become a bit like turkey leftovers at Thanksgiving though. What do you do with that decomposing candle charred heap on your doorstep?

Well, composting is a good idea if you have such a pile. At the very least get it to the green bin before the bugs attack or the bottom rots out leaving you with that wet, orange stain on your front walk until Christmas.

If you haven’t carved  it, painted it, or otherwise decimated it in someway, I encourage you to give something new a try. Full of Vitamin A, there is a plethora of  goodies to make, and you thought Master Gardener’s were just about growing stuff. Here you can surely find something to suit your taste buds from the savory to the sweet.  http://ucanr.org/sites/CE_San_Joaquin/files/35479.pdf

Finally, don’t forget to save a seed or two for next year (before baking!) so you can have another try at growing your own great pumpkin!