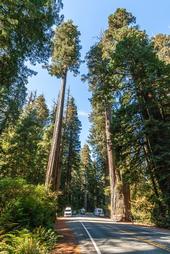 In 2020, 9,000 fires scorched more than 4 million acres of California, a record-breaking year, reported Alejandra Borunda in National Geographic. Fires burned through homes and oak forests, grasslands and pines — and also through patches of giant sequoias and coast redwoods, respectively the most massive and the tallest trees on earth.

Giant sequoias are not the oldest living trees, but some have been growing in Sierra Nevada forests for more than 3,200 years. They are found in 68 groves on the Sierra's western flank. The...

Cut the environmental impact of Christmas by buying a tree at a local farm.

Christmas trees' environmental tolls include fuel for helicopters to harvest and trucks to transport, but UC Cooperative Extension farm advisor Lynn Wunderlich says fertilizer and pesticide use are the main culprits.

"There is pesticide use across the board," she said.

Christmas tree farmers can use integrated pest management tools to reduce pesticide use, including monitoring for pests and natural predators...

A dense stand pine trees and firs burned by the 2020 Creek Fire.

An area near Shaver Lake where the 2020 Creek Fire burned most of the living vegetation and old tree stumps. (Photo: Jeannette Warnert)

"The most important way to battle erosion is to have surface cover - living...