An area near Shaver Lake where the 2020 Creek Fire burned most of the living vegetation and old tree stumps. (Photo: Jeannette Warnert)

"The most important way to battle erosion is to have surface cover - living... 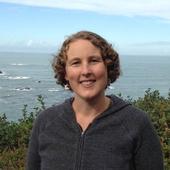 “There is a collective sensation that we are reaching a tipping point,” said Lenya Quinn-Davidson, a fire specialist with the University of California Cooperative Extension. “This year was not just the fluke burning horrifically. This is 3.2 million acres of fire that burned in a month.”

Quinn-Davidson is based in Humboldt County, with typically rainy, foggy redwood forests. However, she said, the forests don't resemble their former...

Many climate change projections point to impacts that will be felt 50 or 100 years from now. But there are indications the earth is already experiencing rising sea levels, intensifying storms, increasing wildfires and droughts, and warmer oceans and atmosphere, reported Mary Caperton Morton in Science News.

For information about wildfire in California, Morton spoke to Max Moritz, UC Cooperative Extension wildfire specialist in the Bren School of Environmental Science and Management at UC Santa Barbara.