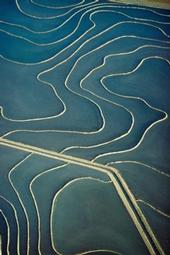 World demand for rice is growing. Shown above, flooded rice fields in the Sacramento Valley.

Rice insects and diseases were minimal or easy to control this year, reported Larry Godfrey, UC Cooperative Extension specialist in the Department of Entomology at UC Davis, at a rice field day in Biggs, Calif., according to an article in Western Farm Press.

Tadpole shrimp populations also were high this season and damage was evident. Godfrey believes they were excessive due to the winter dry period. It took longer...

Reporter Amina Khan with the LA Times profiled husband-and-wife entomologist team Christina and Mark Hoddle of UC Riverside (Mark is also a UC Cooperative Extension entomology specialist). The pair travel the world seeking parasitoids that can serve as biological control to invasive California pests and then test the results at the Center for Invasive Species Research at UC Riverside. "Bugs don't take weekends," Christina Hoddle told the reporter, "so neither do we."

The (Marysville) Appeal-Democrat checked in on the rice harvest which started recently, with an article by reporter Ashley Gebb. USDA reports that harvested acreage for rice in California is up 6 percent this year, to 588,000 acres; in 2010, Yuba and Sutter counties had approximately 154,000 acres planted in rice. The reporter talked to Chris Greer, UC Cooperative Extension farm advisor for Sutter-Yuba and Colusa counties, about what this summer's cooler weather means for the rice harvest. "Overall...

Rice farmers in Northern California are trying to determine exactly how much their yields have suffered because of cold irrigation water, according to an article this week in the Chico Enterprise-Record.

The story, written by Heather Hacking, said UC Cooperative Extension farm advisor Cass Mutters has done research to document the temperatures of water in the fields. Rice doesn't produce as well when irrigated with water at lower temperatures, and the longer the water is cold, the more damage is done.

Back in 1968, when Oroville Dam was built, the state water project created the Thermalito Afterbay to warm water destined for irrigation. From the beginning,...

UC Davis plant pathologist Pamela Ronald's flood-tolerant rice is getting publicity in the state's capital, with a detailed and lengthy radio interview on the Capital Public Radio program Insight and in a TV spot on the Sacramento CBS TV affiliate.

Ronald explained to Insight host Jeffrey Callison that flood-tolerant rice was developed over a period of 13 years by isolating a gene from a rice plant that has poor quality grain, but is naturally able to survive two weeks submerged in water.