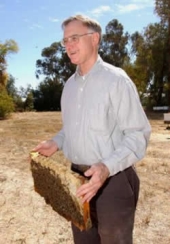 Mussen is known for his expertise on honey bee colony management, pollination, mite control and insecticide damage. Having already logged 30-plus years of honey bee research, Mussen is well-versed on findings that the pollinators produce more than a delicious, amber sweetener.

"Honey is extremely good for burns and wound healing as a whole," Mussen is quoted. "But you are not going to get many medical professionals to say this. If...

In the first paragraph of his blog entry on the Huffington Post, Michael Markarian accuses "big agribusiness" of:

Ouch. The article actually focuses on Proposition 2, an initiative on California's November ballot known as the "Prevention of Farm Animal Cruelty Act." The story mercilessly takes aim at anyone who opposes its passage. 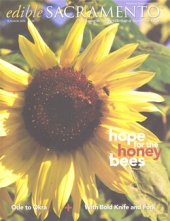 The food and agriculture magazine Edible Sacramento featured honeybees on the cover of its summer edition, and sought comment from UC Davis entomologist Eric Mussen on the hottest issue related to the insects - colony collapse disorder. The value of honey bees, vignettes of beekeepers, and details about hive life and leadership are covered before what writer Mary Moulton called a "disturbing development."

The paraphrased information from Mussen notes that this is not the first time honeybees mysteriously vanished. "In the late 1800s there was a colony collapse and back in the 1960s and early... 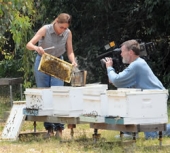 Haagen-Dazs was front and center once again in a news story about colony collapse disorder, a mysterious ailment that is threatening bee hives and, in turn, the crops the bees pollinate. The opening interview on the NBC Nightly News piece was with Haagen-Dazs' spokeswoman Katty Pien standing in front of a grocery freezer full of the ice cream.

"More than 40 percent of the all-natural flavors that Haagen-Dazs has contain ingredients that are dependent upon honeybee pollination. For example, the Vanilla Swiss Almond ice cream has almonds that are 100 percent pollinated by honeybees," Pien stated.

The story, with Anne Thompson reporting, then...

Magazine article reading online is growing in popularity. According to Marketing Analytics, authoritative research firms (Nielsen and Mediamark Research Inc.) found that an average of 83 percent of visitors to the Web sites of 23 large-circulation monthly magazines access those magazines’ content solely online.

That may be true, but some things are lost in the online posting. One is a new gimic from the current issue of Newsweek magazine. Häagen-Dazs is running an ad embedded with flower seeds that can sprout as the linen-based paper decomposes, according to a brief in the