The story opens with UC Davis plant pathologist David Rizzo describing why the term "Sudden Oak Death" is a misnomer.

The disease, he said, "is not particularly sudden, it doesn’t just infect oaks and it doesn’t result in death of all plants."

The six-minute radio story includes interviews with Matteo Garbelotto, an extension specialist in forest pathology at UC Berkeley. He...

Vossen told the reporter that, years ago, participants on a research plot tour willingly munched on fresh vegetables that had been irrigated with treated sewage water.

“Our conclusion at the end of our survey was that 95 percent of people have no problem with using recycled water,” Vossen was quoted....

Sudden Oak Death is changing the Bay Area landscape, according to a story in today's San Jose Mercury News by Julia Scott. The story was prompted by the removal of 40 dead trees in the forests surrounding Crystal Springs Reservoir. The trees were killed by Sudden Oak Death, which is gaining momentum in San Mateo County.

In the article, UC Berkeley forest pathologist Mateo Garbelleto offered a ray of hope, and what some might consider a worst-case scenario.

Garbelleto said a substance developed in his lab, Agri-Fos, can be applied to high-value trees to protect them from Sudden Oak Death. However, it would be cost prohibitive to...

The Los Angeles Times reported yesterday that trees killed by Sudden Oak Death are making the fire raging near Big Sur burn hotter, spread faster and loom more periously over firefighters. The story says hundreds of thousands of oak trees in the area have succombed to the disease caused by the fungus-like organism Phytophthora ramorum.

"You look in some of these canyons, and you'll see 70 percent, 80 percent of tanoaks are dead," Rizzo was quoted. "The... 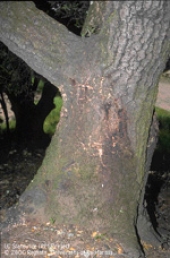 A meeting of the California Oak Mortality Task Force in Marin is generating a spike in news coverage of Sudden Oak Death. Today, the main theme is where the disease took hold in California. UC Berkeley researcher Matteo Garbelotto reported on genetic testing of Phytophthora ramorum, the pathogen that is killing California oaks.

According to a story in the Marin Independent Journal, Garbelotto found the pathogen's forebears at a site on Bolinas Ridge within the Golden Gate National Recreation Area, five kilometers from the Kentfield site where the disease was first observed in...