Farmers are feeling the impact of the drought
Published on: September 15, 2014

Almond farmers use mechanical shakers to knock the nuts to the ground for harvest.

Because of the drought, California almond farmers have been forced to drill new wells, rely on salty groundwater for irrigation and bulldoze some trees, reported Robert Rodriguez in the Fresno Bee.

The story presented results from the USDA National Agricultural Statistics Service, which worked with state ag officials to send surveys to 688 California almond farmers; 458 of them responded.

The survey found that nearly 70 percent of almond farmers have only groundwater to irrigate their trees. About 23 percent said they had to drill new wells and 32 percent were reconditioning existing wells. 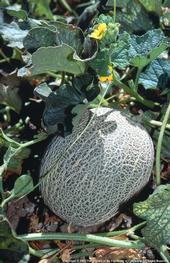 UC expert says reserach in animal biology could help identify strategies to prevent listeria, which caused a recall of cantaloupe from Jensen Farms in Colorado.

The recent listeria outbreak in cantaloupe underscores the urgent need for the FDA's Food Safety Modernization Act, according to experts quoted in a comprehensive story on food safety published yesterday in the Huffington Post. Since 1998, the FDA and USDA have issued guidance on "Good Agricultural Practices" for producers to follow, but the recommendations are voluntary.