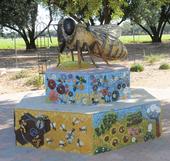 The garden was transformed from a neglected patch of land - described as a giant concrete brick by the program manager - into a bee sanctuary of mostly drought-tolerant, easy-care perennials and shrubs that bloom year round. The compost for the garden...
Read More 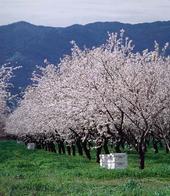 A self-pollinating almond variety under study at the USDA's research facility in Parlier would relieve farmers of costly annual bee rental to pollinate their trees, according to an article in Saturday's Fresno Bee.