Drought is slowing the spread of sudden oak death
Published on: September 25, 2014

The article said Garbelotto isn't hoping for more drought, but evidence shows that the drought is helping reduce SOD infection rates and in some cases is curing infected trees,...

Sudden oak death is creeping into Carmel Valley, and scientists have found infected trees in Gilroy and Prunedale, reported the Salinas Californian.

Warm weather seems to be keeping SOD out of the Salinas Valley, but it is having a deadly effect on the surrounding forests.

“The organism has a really significant impact on our forests,” said Matteo Garbelotto, UC Cooperative Extension specialist in the Department of Environmental Science, Policy and Management at UC Berkeley. He said that adult tanoaks – an evergreen species closely related to... 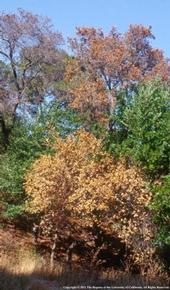 An dramatic increase in sudden oak death incidence it believed to be tied to recent weather patterns.

Aerial and ground surveys have documented 375,700 new cases of dead live oak and tan oak trees over 54,400 acres of California where the pathogen that causes sudden oak death is known to exist, reported the San Francisco Chronicle. Last year there were 38,000 dead trees covering 8,000 acres.

Diseased trees were even found in Golden Gate Park, where there is no obvious source of the pathogen, such as nurseries or wildland.

"It's puzzling that we found it there because it's a totally urban environment, and I really didn't expect it. It shows how complicated and adaptable this organism is," said

Chefs from area restaurants prepared a six-course dinner with ingredients grown in the Carmelitos garden for an October fundraiser.

A seven-acre community-supported garden in the Carmelitos Housing Development produces food in the middle of an urban North Long Beach neighborhood, said an article in Gazettes, a local community newspaper. The farm was started as a joint effort between the Housing Authority of the County of Los Angeles and the University of California Cooperative Extension.

Called "The Growing Experience," the garden supports a Community Supported Agriculture program, which supplies weekly boxes of fresh produce to families who pay a subscription fee.