Despite frequent rain since the New Year, the water levels in two Monterey County lakes aren't rebounding at the same rate as drought-stricken lakes in other parts of California, reported Ramin Skibba in the Monterey Herald.

The Monterey County lakes don't fill as quickly as other lakes - such as Shasta, Folsom...

Farmers can access CropManage from the field with a smart phone or tablet computer.

A UC Agriculture and Natural Resources scientist will hold a workshop in April to teach farmers how to use an online application available free from UC ANR that calculates the precise water and fertilizer needs of their crops, reported the Salinas Californian.

Spinach takes up 80 percent of its nitrogen needs in the final two weeks before harvest.

Richard Smith and Michael Cahn, UCCE advisors for Monterey and other Central Coast counties, have been conducting field trials for several years to determine volume data on fertilizer application. Once growers know exactly how much nitrogen their crop is absorbing, they can more precisely apply an appropriate... 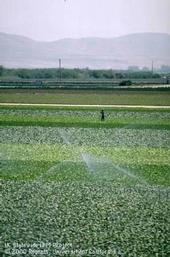 With the quick test, growers can determine how much nitrogen is in the soil and use only as much fertilizer as their lettuce needs to grow.