Remove filter You are viewing all posts in this blog tagged with
UCCE advisor speaks about vegetable grafting at neighboring university
Published on: October 2, 2019 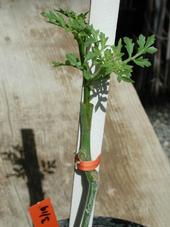 Grafting plants onto specially bred rootstocks is a practice that is common in tree crops. Grafting confers resistance to soil-borne diseases and pests, requiring less inputs and leading to sustainable crop productivity. It is now...

Sorghum is not only a potential drought-tolerant crop for the San Joaquin Valley, it also presents the opportunity for scientists to understand the mechanism behind drought tolerance at the genetic level, said UCCE sorghum specialist Jeff Dahlberg in a segment on ABC 30 Action News.

Reporter Cristina Davies spent an hour and a half at the UC Kearney Agricultural Research and Extension Center in Parlier during the sorghum harvest to learn about the potential of sorghum research.

"If we can elucidate the genetics behind (drought... 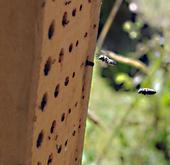 What makes leafcutter bees special? It's their innate ability to...

A group of trained and dedicated volunteers have been tasting avocado samples at the UC Kearney Agricultural Research and Extension Center in Parlier to determine whether the GEM avocado variety can stand up to the tried-and-true Hass in grocery stores, reported Dale Yurong on ABC 30 Action News.

Yurong visited the sensory lab at Kearney where nine tasters have been meeting for months to help inform UC and USDA research that may enable commercial production of avocados in the San Joaquin Valley, an area believed to be unsuitable because of hot summers and cold...

Keeping global warming below 2 degrees C (3.6 F) can be achieved only by reducing greenhouse gas emissions from all sectors, including land and food, said the United Nations' Intergovernmental Panel on Climate Change in a report released Aug. 8, 2019.

The panel of scientists said agriculture, deforestration and other land use - such as harvesting peat and managing grasslands and wetlands - generate about one-third of human greenhouse gas emissions and 44% of methane emissions. The panel suggests that farmland be reduced and forestland increased to keep the earth from getting more than 1.5 degrees C hotter than in...