Home gardeners and farmers are advised to prepare for a hard freeze in California.

A very cold airmass from western Canada is moving into California tonight, reported the National Weather Service. With a hard freeze forecast, farmers and backyard gardeners are advised to prepare for temperatures that could damage their plants, reported the Sacramento Bee.

Homeowners should check for plants that are likely to be exposed to cold temperatures, said Judy McClure, UC Cooperative Extension master gardener...

This month's cold weather was brought on by a stable, cool air mass which hovered over Northern California.

Farmers in California's Central Valley have been taking precautions against freezing as nighttime temperatures have dipped into the low 20s in some areas, reported Tim Hearden of Capital Press.

From Dec. 3-10, temperatures dropped as low as 31 degrees in Fresno, 26 degrees in Madera, 27 degrees in Merced, 26 degrees in Napa, 25 in Redding and 27 in Redbluff. Growers in these areas were working to avoid damages like those suffered in 2007, when a freeze caused more than $1.4 billion in damage to citrus, avocados, strawberries, vegetables, nursery stock and other crops, the article said.

In northern areas, freezes blackened the tips of some... 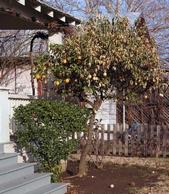 A citrus tree damaged during a freeze.

Newspapers up and down the state are covering the cold storm system approaching California. In addition to reporting the weather, Sacramento Bee reporter Loretta Kalb took the time yesterday to check on the impact of the storm on California citrus.

Even though it was Sunday afternoon, UC Cooperative Extension Butte County farm advisor Joe Connell contacted Kalb to tell her citrus crops should emerge with little or no damage from the week's storm.

"As far as citrus goes, for the naval orange, it takes about 3.5 hours at 26 degrees for the first orange to... 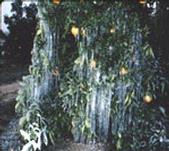 A citrus tree that was coated with water for frost protection.

The San Joaquin Valley is bracing for a hard freeze predicted to strike tonight and tomorrow morning, putting the Valley's $1.3 billion citrus industry on high alert. Whether farmers will have to spring into action depends on a lot of things, such as cloud cover, according to Joel Nelson of California Citrus Mutual, who was quoted in today's San Francisco Chronicle.

"But we will have the wind machines primed and many of them on from 8 p.m. to 7 a.m.," Nelson is quoted.