Processing tomatoes -- which are used to make pizza and spaghett sauce, salsa and other products -- make up 96 percent of tomatoes grown in California.

The growth was attributed... 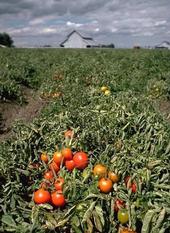 Farmers are seeing a higher than usual amount of curly top virus infection in Fresno area processing tomatoes this year.

This year's Fresno County processing tomato crop is suffering from a severe case of curly top virus, reported Alice Daniel on the California Report this morning.