Remove filter You are viewing all posts in this blog tagged with
USDA approves release of weevil to control yellow starthistle
Published on: September 19, 2019

A severe infestation of yellow starthistle in Calaveras County.

Ceratapion basicorne is native to Eurasia, the same area where yellow starthistle originated. Yellow starthistle is thought to have been introduced into California from Chile during the Gold Rush. The weed readily took hold in California valleys and foothills, thriving in areas where the soil has been disturbed by animals grazing, road construction and wildland firebreaks....

“This is an important topic,” Haviland said. “Chlorpyrifos has had a lot of benefits to...

City of Riverside staff draped a synthetic screen on a steel frame to encompass the 'parent navel' orange tree at the corner of Arlington and Magnolia avenues in Riverside to protect it from Asian citrus psyllids that spread huanglongbing disease, reported Ryan Hagen in the Riverside Press-Enterprise. Huanglongbing (HLB) is a devastating bacterial disease of citrus that is starting to spread rapidly in urban areas of Southern California.

The newly covered tree is valued for its status as an early ancestor of all Washington navel orange trees.

However, it is an irritant. People who accidentally breath it in can have irrigated eyes,... 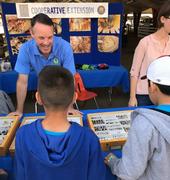 Children may have a natural tendency to squash bugs, but UC Cooperative Extension entomologist David Haviland encouraged them at the recent "Farm Day in the City" to think about the value of insects they find in their environments, reported Amanda Mason on 23ABC News in Bakersfield.

"Every single insect plays a role, even if it's only purpose is to get eaten by something," Haviland said. "Everything is important."

Haviland spent the day at the Kern County Fairgrounds teaching students about insect life cycles and their role in the ecosystem....