DOTHIORELLA LEAF AND STEM BLIGHT
Published on: May 10, 2013

Stem and leaf blights are symptoms that appear for various reasons – high rainfall or humidity, spray burn, chewing insect infestation.  Here in California we can add other causes, such as drought and salinity burn.  These conditions can cause wounding of leaf and stems allowing entry of fungal spores that can cause leaf and stem dieback.  This condition is most common near the coast where weather conditions can change from mild and low temperatures to extremely high temperature with winds, such as the Santa Anas or the Sundowners in Santa Barbara.  Leaves suddenly dry out, causing cracking either at that time or when they are rehydrated with irrigation.  This allows spore entry into the wounds and permits the pathogen to grow in the dead tissue.  Symptoms appear 7 – 10 days after the stress.  These are decay fungi that create these spores and they are the ones that cause decay of dead tissue on the ground.  So their spores are everywhere.

The greater part of a tree is dead – the woody part of the branches and trunk.  And it is dead tissue that these fungi are feeding on. Most trees will limit the growth of the fungus by sealing off the infection with gums of various sorts.  In that case, the disease is limited and you may only see a leaf or small branch dying back. In mature trees it is possible to see a small branch here and there that has died back, but the bulk of the canopy is still green.  It has been called “salt and pepper syndrome”, because of that speckled appearance.  In the case of young trees with their smaller root systems and a lesser ability to seal of the disease process, a whole tree can die.

Since this is a severe water stress or salt stress induced problem, the most important management issue is to watch the weather forecasts predicting unusual hot, dry weather and make sure the trees are adequately irrigated going into the stressful period. Shallow rooted trees like avocados are more prone to dry out rapidly in these high water demand situations, but it can be occur in other trees (citrus, apple, peach) and shrubs if the weather conditions are severe enough. With poor leaching due to low rainfall, this can be more of a problem

The only solution to the symptoms is to cut out the diseased parts to prevent its further spread. Once the disease starts spreading, the fungus can produce copious amounts of spores, which in the case of avocado can cause cankers and rots on the fruit.

Figure.  In the case of young trees, the whole tree may die from blight. 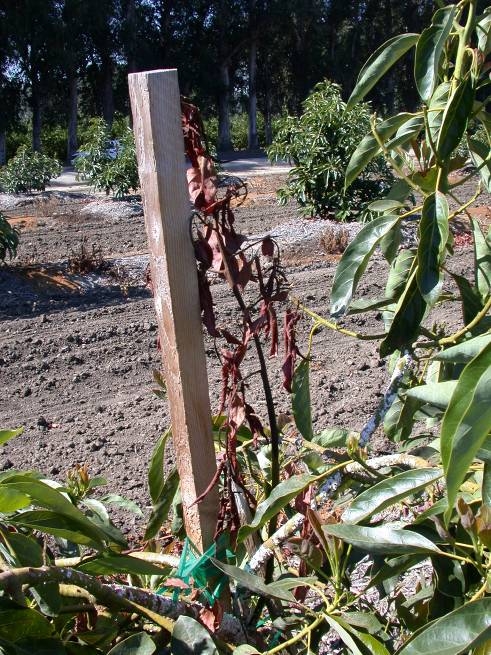