A few weeks ago I was browsing through the nursery at a farm in Vallejo and saw a tomato plant that was just labeled with a “J” on the pot.  I questioned farmer Rita about it and she told me it was a Japanese tomato plant she grew from a packet of seeds she found at a market.  Never having heard of a Japanese tomato before, I couldn’t resist the urge to buy it and plant it in my garden just out of curiosity.

The Momotaro tomato, both the heirloom and the hybrid varieties, seems to be the most popular Japanese tomato grown in the state.  Extremely popular in Japan, this indeterminate plant grows five feet tall and produces thick skinned rose pink meaty tomatoes.  The average tomato weight is six to seven ounces.  There is also a yellow Momotaro variety.  Named after a Japanese folk hero, the taste of this low acid tomato is frequently described as both sweet and tangy.

Another indeterminate tomato plant that also produces low acid pink fleshed tomatoes is the Odoriko.  The heirloom Odoriko is listed as one of the top ten best tasting heirloom tomatoes in issue #88 of Fine Gardening magazine, while the hybrid Odoriko is listed in an article on the Sunset website on their favorite slicing tomatoes.  Some gardeners also report the tomatoes are slightly larger in size than the Momotaro.

Although the three plants just mentioned produce pink or orange-yellow flesh tomatoes, there are a number of popular red fleshed tomatoes like the Katana tomato.  But little information is available as to whether or not this red tomato grows well in California.

Although I have no idea if my Japanese tomato plant is one of the three popular ones often grown in California, I can’t wait until the tomatoes ripen on the plant.  It will be fun determining what variety the tomato is, and tasting a tomato I’ve never tried before! 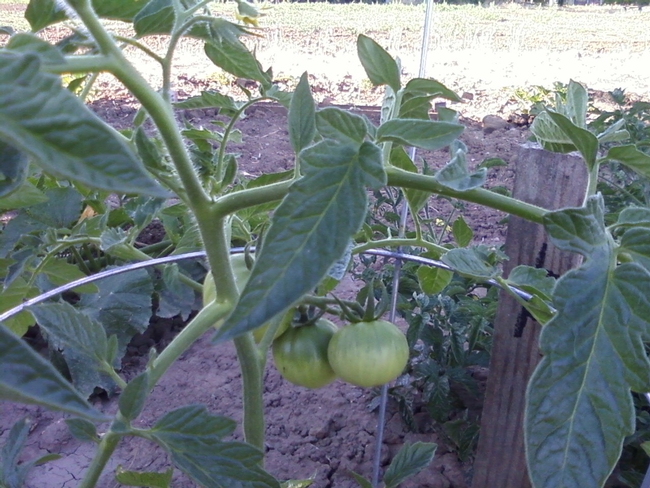 Tags: Japanese tomatoes (1)
Comments: 3
Comments:
by Blossom Endrot
on September 3, 2013 at 3:25 AM
Very interesting. I live in the UK where we are not usually blessed with very hot summers. I would love to know how the tomatoes turned out and if any seeds will be available for me to try next year. I grow my tomatoes outdoors in large containers and in my unheated greenhouse both in compost and hydroponically.

A.L
by Kathy Low
on September 3, 2013 at 9:53 AM
It turned out to be a red Japanese tomato - most likely a Katana. It has only yielded 7 tomatoes to date. A friend who also grew the same from the same nursery said her plant provided her with even fewer tomatoes. Because of the small harvest I did not save any seeds since I do not intend on growing it again next year. But I do see that the Kitazawa Seed Company (www.kitazawaseed.com) sells several varieties of Japanese tomato seeds.
by Lester Chew
on November 4, 2013 at 8:19 PM
I am currently growing Momotaro and Odoriko tomatoes at my farm in Bandung (West Java) Indonesia in green houses at altitude 1200 ASL. They are very large in size and taste.
Leave a Reply: