Published on: September 20, 2018
Most people are familiar with a red pomegranate variety called 'Wonderful', which is commonly sold in most nurseries.  While pomegranates are often regarded as a nutrient-dense food containing anti-oxidants and are visually beautiful to behold, I never enjoyed the tanginess and acidity of pomegranates.  Then years ago, I learned about a fabled fruit known as the White Pomegranate (Punica granatum) and read that unlike its red counterpart, the White Pomegranate was sweet and juicy.  I was intrigued and went in search of this fruit.  It was a bit like hunting for a mythical creature, so you can imagine my surprise and delight when found it at a nursery at a local box store.
I planted the tree in less than optimal conditions because that is all I have in my postage-sized stamp yard where light and heat are uneven and unreliable.  I watched the White Pomegranate tree grow season after season and although it was pretty and shrubby, it did not produce any fruit for many years (I'm certain that there would be a great difference if the tree had been planted in more optimal conditions).  I'd watch the tree produce beautiful orange blossoms only to see them drop.  Then about 5 years in, the tree started to produce these beautiful fruits that hung down like Christmas tree ornaments.  I was excited but skeptical that this White Pomegranate was as the label that came with the tree described it--namely, that it would be sweet and not tart.  When the day came that I was able to harvest my first White Pomegranates, I cracked one open with a knife and tasted it.  Much to my delight, it had all the qualities of its red counterpart, with the tartness.  Some may even opine that it is TOO sweet, but being a sweet tooth, I am not complaining.
The White Pomegranate is still considered a rare fruit.  I am not sure why it does not seem to be commercially grown, as I am sure I am not alone in disliking tartness.  While I do not know if this type of tree can still be purchased locally, there are on-line nurseries which do carry this shrub in limited quantities.
I recall in my Master Gardener training, that one of the trainers had remarked that if you want to have fruit trees that require little care, get fig and pomegranate trees (I have both and can attest to this).  Such trees are so ancient, dating back to Biblical times, that they seem to be virtually bullet-proof against pest and disease--at least that has been true in my garden.  5 stars for sure! 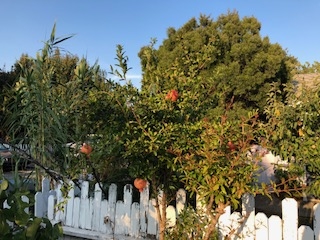 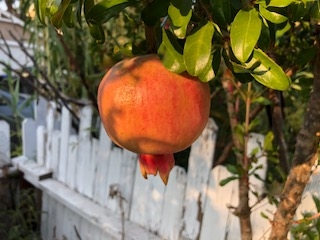 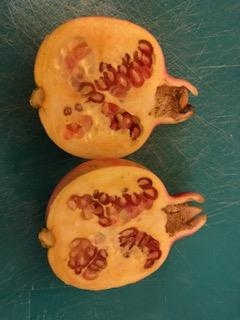 Comments: 6
Comments:
by Clayton Fraga
on September 21, 2018 at 11:36 AM
Thanks for your post, I've been wanting to plant a pomegranate tree but don't care for the tartness of the red fruits. Now the search begins. Happy Gardening
by Howard Fitzpatrick
on September 22, 2018 at 7:40 AM
I used to get figs from my back yard competing only with the birds for the ripe ones. Since we have been overrun by the little red Fox Squirrels I never get a fig. The squirrels eat them green off the tree. Why someone thought we needed these rodent pests native to the northeast is beyond me.
by michael rickett
on March 15, 2020 at 5:51 AM
I,m looking for a source for 100 cuttings to plant in Hawaii. In the fall.
by Pratik
on May 14, 2020 at 12:14 AM
I have a big tree of white pomogranate if you need i can share the seeds
by Teresita
on September 9, 2020 at 6:38 PM
My hubby and I just deserved the white pomegranate fruits we harvested from our backyard. Spending time to do it is all worth it because they are so sweet and no tartness at all. We have had this tree for around 10 years now and has been bearing fruits heavily for the last couple of years. We bought the plant thinking it was just a regular pomegranate. When it started beating fruits, we were waiting for the fruits to turn red but they never did. So thinking that it was a bad kind, we didn’t even tasted it and just disposed it. But one season when I saw a cracked fruit, I took a taste of the seed and found out that it was very sweet. Well, I search online and learned that it was the white variety. ❤️❤️❤️
by Kim Ly
on April 12, 2021 at 10:03 PM
Where can I get the plant?
Leave a Reply: