Edibles in Your Landscape

The concept of edible landscaping has been growing in popularity for the last few decades.  It proposes that we integrate edible plants into our regular landscape design and plantings.  Its proponents argue that since plant-able soil is at a premium for many people, using all our space makes sense.  They also point out that in addition to helping us eat healthier by growing some of our own fruit  and vegetables, many of these plants are downright pretty.

I found myself on the flip-side of edible landscaping the last few years. I have two raised beds, six by six feet in my back yard that I have grown herbs and vegetables in for years.  Several years ago I bought some dahlia tubers at the San Francisco Garden Show. When I got them home, I realized I didn't know where I could plant them.  Front and side yards all had established plantings that weren't amenable to some potentially four foot neighbors. I decided to put them in the very back of my raised vegetable beds.  Over the years, I got a few more varieties.  I thought the foliage and flowers made a nice backdrop for my vegetables.

Then I saw some corms for the most beautiful two-toned gladiolas.  I tried a few in the front yard but they kept getting blown over by the wind.  The backyard seemed my only solution.  I reasoned that since the leaves were tall but slender I really shouldn't have to worry too much about shading out my vegetables.  I planted them in a big line right across the front of both raised beds.

The first year was beautiful and my plan worked well.  Gradually though the gladiolas multiplied and I found myself with a thick wall of foliage last year.  I tried pulling the foliage to each side of the tomatoes to try and let some sunlight in, but it was the worst year for tomatoes I had ever had.

After growing season, I dug up the gladiolas, gave some away and replanted some farther back in the bed in little clumps not solid rows.  When it came time to put in the tomatoes this year, I placed them on the edges and right in front. This year the tomatoes are doing much better.

Just to let you know I am a firm believer in edible landscaping.  In other parts of the yard I have a fig, a crabapple and an olive tree.  I have pomegranate and pineapple guava shrubs and some smaller blueberry bushes. I have artichoke, and lavender plants and some herbal plants and ground-covers.

I love food and I love flowers.  As long as we can give them the soil, the light, and the water they need, they will get along just fine. 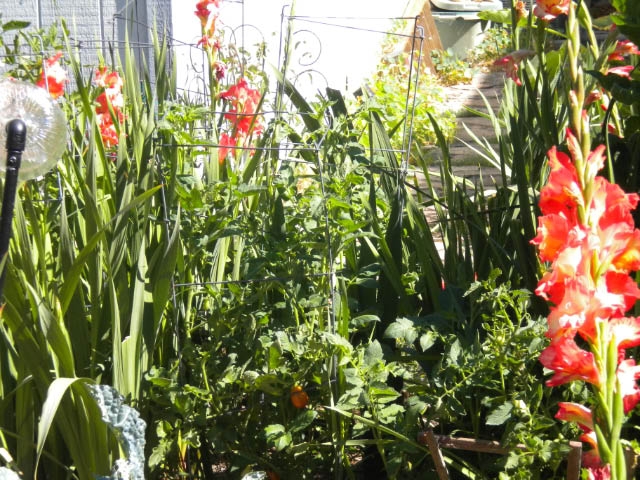 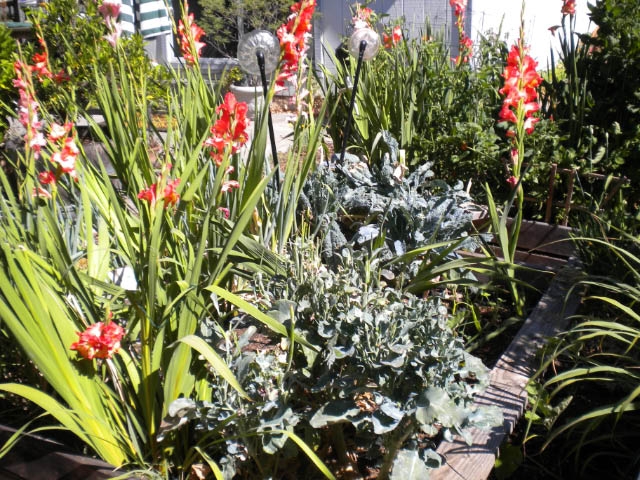