There are two ways to interpret soil testing of the cations calcium (Ca) and magnesium (Mg), from the field: one by basic cation exchange ratios and the other by sufficiency. Base cation saturation ratios appear in most soil reports (see area circled in red below) and consist of percentages of calcium, magnesium and also potassium, sodium and hydrogen.  Tim Hartz from UC Davis addressed this topic head on at the recent UC Soil Fertility Short Course held on October 23.

Proponents for examining cation ratios, for example Albrecht and Stiener, have held that there is an ideal cation ratio, meaning that the optimum soil environment for crop plants occurs when the cation exchange complex is 65% Ca : 10% Mg : 5% K : 20% H. To some extent this makes sense, since it has been shown that the base saturation of an individual cation can affect its availability to plants and that the uptake of one cation may affect the uptake of others.

However, research testing a variety of ratios of cations in the soil, especially Ca and Mg, has not found much in the way of identifying a true ideal ratio. As an example given at the short course in Davis, a study in Wisconsin that doubled and even quadrupled the exchangeable Ca: Mg ratio resulted in no difference in yield of alfalfa hay per acre.

It was rather suggested that growers and managers should concentrate on making sure each nutrient is in sufficiency for plant uptake rather than on reaching some favorable cation saturation ratio.

Moreover, it’s pretty expensive to try and alter the calcium and magnesium ratios of a soil. For example, more than 1700 lbs of gypsum will be needed to be added per acre to raise the calcium by 20 ppm. So, outside of extreme misbalances of calcium and magnesium which result in structural problems like crusting, it’s probably not worth the effort and money to obtain a ratio which doesn’t seem to offer anything extra in the way of nutrient sufficiency.

In conclusion, the truth of the matter is really that even though cations do compete with another for plant uptake and have different effects on soil structure, it is nevertheless completely possible to have high plant productivity with a wide range of ratios of calcium to magnesium.

The link below is an article with a full discussion of the concept of soil cation ratios. 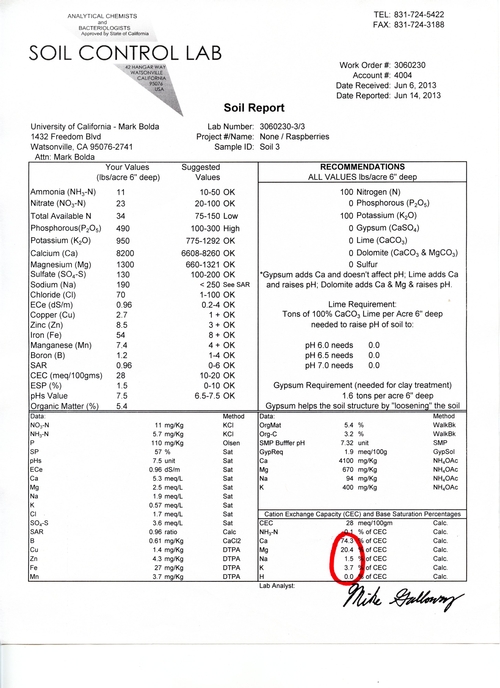 Tags: base cation saturation concept (1), calcium (7), magnesium (5)
Comments: 2
Comments:
by Tom Walters
on November 22, 2013 at 2:16 PM
Great article Mark, thanks! Any thoughts on whether the abundance of Ca and Mg in California soils, coupled with the heavy K usage of both raspberries and strawberries, presents any particular challenges for potassium nutrition of these crops? Could I appear to have sufficient K, but be constrained in how much actually gets into the plant, on account of having so many cation exchange sites occupied by Ca and Mg?
by Mark Bolda
on November 22, 2013 at 2:23 PM
Hi Tom, thanks for your input. I think the only thing I could say to your question is that I have yet to receive or handle a tissue sample which is even close to deficient in K. Based on what I learned at the Soil Fertility meeting in Davis in October, I think the MASSIVE amount of K already in the soil from the time people started farming here coupled with the near continuous contribution from fertilizers pretty well guarantees we won't be short K for a while, no matter how many of the exchange sites are occupied by the other cations.
Leave a Reply: