Avocados Looking Grim this Time of Year
Published on: February 10, 2014

I've been getting calls and have gone out to see several avocado orchards in the Ventura/Santa Barbara area and the comments are that the trees look worse this year than they normally do. When I see the trees, it's clear that they don't look in the best shape. This time of year, when there are old leaves that have accumulated salt all through the irrigation period and the trees are getting ready to flower, the leaves just don't have much energy. Also, two years of drought with no rain, means that salts have probably accumulated more by this time of year, than in a year when we do have “normal” rain to leach the soil. The accumulated salts can lead to water stress which also brings on stem and leaf blight, along with salt burn. With the bicarbonates in the water, the pH may have rise as well, inducing some iron chlorosis. Compounding the leaf damage is some frost burn, which was not cold enough to kill the leaves. Any dead tissue, also makes the leaves look more ratty, because with Santa Ana winds earlier, those dead areas have often blown out, making them look like they have been nibbled on by insects. Further adding to the stress was a huge crop year that put a lot of stress on the tress. When clearing the leaves to look at roots, it has often been hard to find viable roots. All these stresses are going to make the trees more susceptible to root rot. So it's going to be necessary for growers to keep their eyes out for further disease symptoms and to be ready to treat with phosphites when the soil warms up enough for the roots to start growing again. 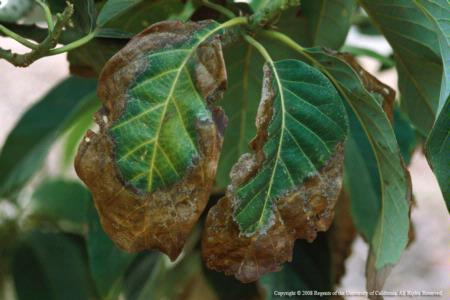